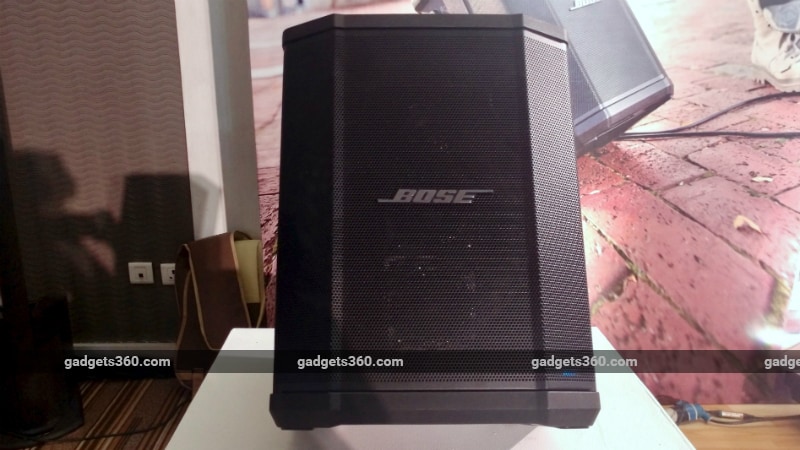 The S1 Pro multi position PA system has been launched in India by Bose Professional. The latest addition to Bose's portable professional product line has been priced at Rs. 60,624 and has been designed with musicians, DJs, and general PA use in mind. Bose has appointed Luxury Personified, which has a presence in every major city of India through its retailers and dealers, as the national distributor for the product.

Starting Wednesday, the S1 Pro will be available via professional audio stores across the country. The company plans to make the product available via multi-brand retails stores like Croma as well as official Bose stores from July.

The Bose S1 Pro weighs only 6.8kg and has a built-in handle for easy transport. Sound is delivered via three 2.5-inch drivers, two acoustic ports, and a 6-inch woofer. The system has a 3-channel mixer with 2 mic/ line in inputs with reverb controls and a third channel with auxiliary in and integrated Bluetooth streaming. The system also has integrated ToneMatch processing for microphones and acoustic guitars,

The S1 Pro has a frequency response of 70 - 16kHz and a max SPL rating of 103 decibels. Bose claims that it is capable of servicing an audience of up to 50 members. The Bose S1 Pro can be used on the go via the lithium-ion battery on board which has a claimed battery life of 6 hours. intelligent circuitry offers a choice between trickle charge or quick-charge.

The biggest USP of the S1 Pro is the fact that it is engineered to be used in four different positions in order to service different needs - elevated, on its side (as a floor monitor), tilted, and mounted on a speaker stand. Built-in sensors detect when the position of the speakers is changed and trigger a feature called Auto EQ which makes sure optimal sound is delivered in any position. The system also has a line out jack and is compatible with standard 35 mm speaker stands.