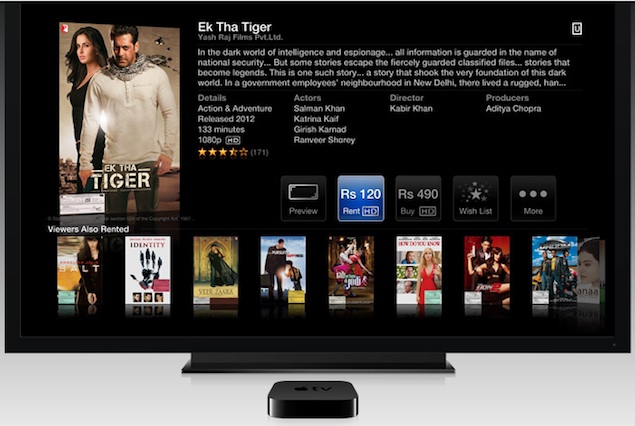 Apple looks to be getting ready to launch Apple TV in India, as the streaming media player has found its way to the official Apple India website. The listing quotes the price of the device as Rs 8,295. It was first spotted by BGR India. However, Apple has not issued a formal press statement. We also contacted an Apple premium reseller to check availability but they were not aware of the launch.

Apple TV is a media streamer that lets users play content from popular services like YouTube, Netflix and Hulu Plus, as well as some other services like Vimeo. It also offers access to Apple's iTunes Store, through which users can purchase or rent movies, or buy music. Following the launch of the iTunes Store in India, Apple TV had started offering Indian content. Apple TV also have access to content shared on the local network via iTunes Home Sharing.

One of the major highlights of the Apple TV is support for Airplay which allows users to stream content wirelessly (over Wi-Fi) from any iOS device or iTunes (Mac as well as Windows) to the Apple TV. It can also be used to wirelessly mirror the display of iOS devices as well as Macs.

Apple TV supports up to 1080 pixel resolution, and features an HDMI port, a micro-USB port, Ethernet port, a built-in IR receiver (for the remote) and supports WiFi connectivity. The device is powered by an Apple A5 processor, and comes with 512MB RAM and 8GB NAND Flash memory for caching content.

Apple TV will compete with cheaper offerings from Western Digital and a host of other cheaper Android and custom-OS based media players/ streamers. While these media players are great for playing content you may have acquired from 'other' sources, Apple TV has seamless iTunes Store integration going in its favour.