Apple, alongside its iPhone 6s, iPhone 6s Plus and iPad Pro launch, unveiled the new Apple TV earlier this month. While the home entertainment system would be hitting the shelves next month, it has already appeared in a hands-on video detailing the hardware design and the software of the device.

The fourth generation Apple TV, as seen in the video by 9to5 Mac, is taller than its previous version and features a slightly different set of ports. As we know already, it is powered by Apple's A8 chip clubbed with 2GB of RAM and packs Wi-Fi 802.11ac MIMO antennas. Also featured are an IR receiver, Bluetooth 4.0, HDMI 1.4 port, an Ethernet port, and a USB-C port. As reported earlier, the new Apple TV misses out on the optical audio output, which also is the reason for a slightly changed layout of ports. The overall finish of the product, however, is similar to the previous version.

Also known is that the Apple TV remote as showed at the launch event, features a dual-tone glass finish at the bottom half and a matte finish on the upper half. The matte finish end of the remote also acts as the touchpad to navigate on the television screen and can be clicked as well.

It has been mentioned that the Menu button at the top doubles up as the back button for the tvOS - similar to the existing Apple TV - and the new TV icon button besides it brings users back to the home screen irrespective of their current position. The Siri button works in collaboration with the microphones on the remote's front and back panel. The video shows it searches for the desired content across everything on the Apple TV including movies, TV shows, sports, stock charts, and weather. Users would simply have to press the button, give a voice command, and release it for Siri to show results. There is also a play/ pause button below the Siri button and volume buttons besides it. The remote would now support the Lightning cable for charging. 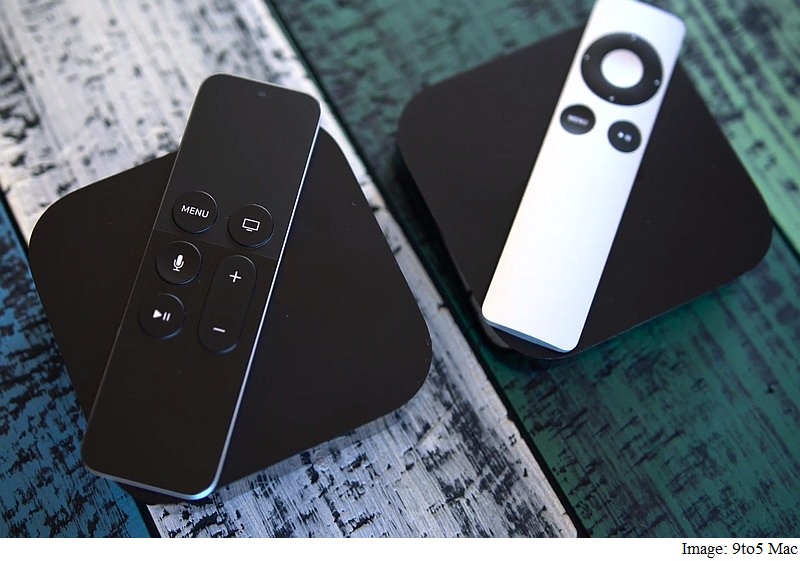 Other additional MFi Bluetooth controllers and iOS 9 devices such as iPod Touch and iPhone models and the Apple TV remote itself can be paired with the Apple TV for multiplayer gaming. According to the report, Apple TV can now connect Bluetooth headphones and Bluetooth speakers for audio output as well. The Cupertino firm would be selling the Apple TV with remote starting $149 and the remote separately for $79. A Wii-Remote like wrist strap can be also bought for under $15.

On the software front, the Apple TV is said to be running a custom version of iOS 9 supporting the same graphics, sound, wireless, and accessory features found in iPad, iPhone, and iPod Touch. The new user interface is said to be cleaner and gives an iOS 9-like appearance. The main screen features a Top Shelf, which includes recent titles, music, movies, and shows. Apps for movies and TV are also included. These apps would let users browse through new content and view their purchases in one place. During a movie or a TV show playback, users can even ask Siri about the actor, view related information on the movie description, audio, subtitles, and more. Streaming of content using Airplay from an iOS device to the Apple TV is of course possible as well.

The Photos app would show the user's iCloud Photo Library albums. Users can also start a slideshow with a specific set of images or can set an album as a screensaver for the Apple TV. The Music app triggers Apple Music and would also give access to Beats 1 radio station. Creating a custom station based on a song or an artist is also possible. Clicking on Now Playing section would show which song is next along with other additional functions at the top above the album art. Home Sharing can be enabled on the Apple TV and the PC from where the content is shared. This would let users browse through music, movies, and TV shows stored on another computer on the Apple TV.

Finally, the video also showcases the voiceover, video descriptions, and closed captioning features of the new Apple TV, which were already there in its predecessor. The new version includes Zoom function with adjustable multipliers, bold text options, contrast settings, reduce motion, and audio descriptions. The settings option also features a 'Manage Apps' section, which right now is empty. Apple would be releasing an App Store after the device hits the market. Options to manage the device storage and Manage Subscriptions are present as well.