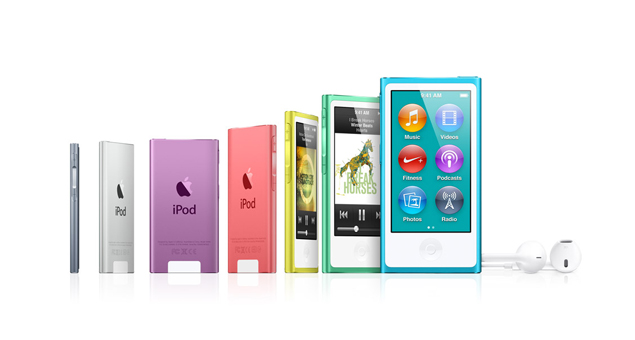 Apple garnered all the attention at its iPhone event unveiling the the thinnest-ever version of its smartphone, the iPhone 5. The company also officially took the wraps off iOS 6, which is scheduled for a September 19 release.

However, the iPhone 5 was not the only "Apple of our eyes". The company also introduced an all new iPod touch and a redesigned iPod nano.

The cheaper line of Apple's portable player was overhauled to include a larger 2.5-inch multi-touch display. It's thinner at 5.4mm and lighter too, also featuring the new "Lightning" dock connector. The new iPod nano also comes bundled with Apple's redesigned headphones, the "EarPods" like the iPod touch.

Looking like a miniature version of the iPhone, the new nano has physical playback controls located on the side of the device, a welcome addition from the touch-only operation on the previous nano. It comes integrated with an FM tuner along with Bluetooth, fitness features including support for Nike+ and a pedometer, making the nano more versatile than its previous versions.

The device also features Apple's home button with a circle, which is an odd departure from Apple's typical square aesthetic. It promises up to 30 hours of battery life.

The new nanos will be available this October in seven gorgeous colours: pink, yellow, blue, green, purple, silver and slate. In case you'd like to extend your generosity for a cause, you can purchase a RED iPod nano and Apple will donate a portion of the purchase price to the Global Fund to fight AIDS in Africa (This colour is applicable to the iPod touch and iPod shuffle as well). A 16GB model will be available for $149.

The iPod shuffle didn't receive any major upgrades except for the change in colours: the new shuffle will match the white, black, purple, green, blue, yellow, and red hues of the new iPod nano. Apple will sell you a 2GB iPod shuffle for $49, the same capacity and price as before.

The iPod classic also follows suit with no changes at all. The 160GB classic remains on sale for $249, retaining its niche position as a cheap high capacity portable music player.