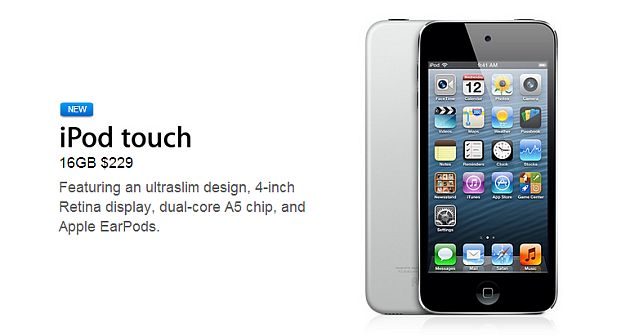 Apple has listed a new 16GB variant of its iPod touch music player on its website pricing it at $229.

The iPod touch variant features a 4-inch Retina display with 1136x640 pixels resolution and is powered by a dual-core A5 processor. It also features a front-facing FaceTime HD camera in the same form factor as that of the 5th Generation iPod touch that takes 1.2-megapixel photos and records 720p video.

The new iPod touch variant is only available in Silver colour and has gone on sale in the US.

It's also worth pointing out that Apple has now discontinued the 16GB and 32GB versions of the fourth generation iPod touch.

Apple had unveiled the fifth generation iPod touch in 32GB and 64GB storage variants in September 2012. The iPods sport a 4-inch Retina display screen with a 1136x640 pixels resolution, just like the iPhone 5. Apple had claimed that the new iPod touch is its thinnest ever at 6.1mm, sporting a lighter anodised aluminium body weighing only 88grams.

The front-facing camera was upgraded to allow 720p video recording while the rear-facing iSight-branded camera had been bumped to 5-megapixels with autofocus and LED flash, a new Panorama mode and support for 1080p video recording with video image stabilisation. Apple had also introduced the 8-pin "Lightning" dock connector that is reversible and can be used with other accessories with the fifth generation iPod touch. The device also includes support for Bluetooth 4.0 and dual-band 802.11n.