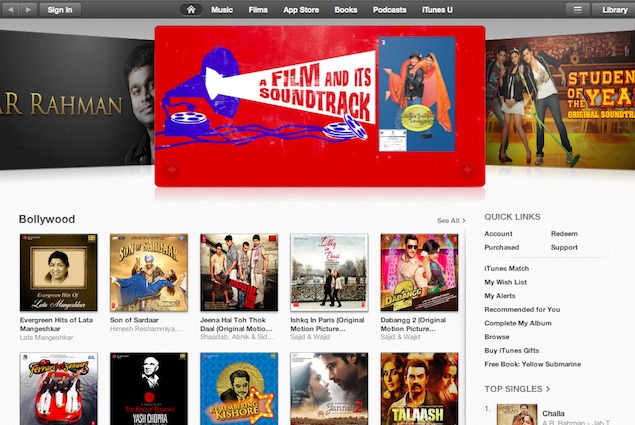 Apple on Tuesday finally extended the iTunes Store to India, offering consumers the ability to purchase music, buy or rent movies, but like various other international markets, the TV Shows are missing.

The iTunes Store - not to be confused with Apple's App Store that showcases iOS apps - features music and movies from the world's leading music labels, movie studios as well as independent labels. While the App Store is available in over 155 countries worldwide, a much smaller number feature the iTunes Store. As you would expect, the iTunes Store in India prominently features Bollywood content as well.

The iTunes Store debuted as the US-only iTunes Music Store in April 2003. It has since expanded to include movies and TV shows and was last expanded in June to include 12 Asian countries.

Pricing in the India seems pretty reasonable and, at least for music, cheaper than some of its competitors. Most songs seem to be priced at Rs. 12, compared to Flipkart's pricing of Rs. 15 for most popular tracks in its Flyte store. Some other tracks are priced as low as Rs. 7 and others as high as Rs. 15. Similarly, most movies are available to rent at Rs. 80 in SD (Rs. 120 in HD) and buy for Rs. 290 in SD and Rs. 490 in HD.