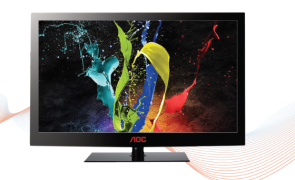 TPV Technology of Taiwan, which owns the AOC brand, is targeting to capture 10 percent of the flat panel TV segment in the country by next year, a company official said on Saturday.

"Our present market share is three per cent in LCD and LED segment. We are targeting to capture 10 percent next year", Seema Bhatnagar, director (TV) of TPV technology said.

Currently, the company is importing the sets from its factories in China.

To a query, Bhatnagar told reporters that the company was planning to set up a plant in India in 2014.

She said the strategy adopted by AOC was to capture the CRT (cathode ray tube) market transition by giving quality products at affordable prices.

About the company's future plans, she said the AOC tablets would be launched in the country in three months time.

Google wants to join the party, not crash it
Asus PadFone 2 images, video surface ahead of launch