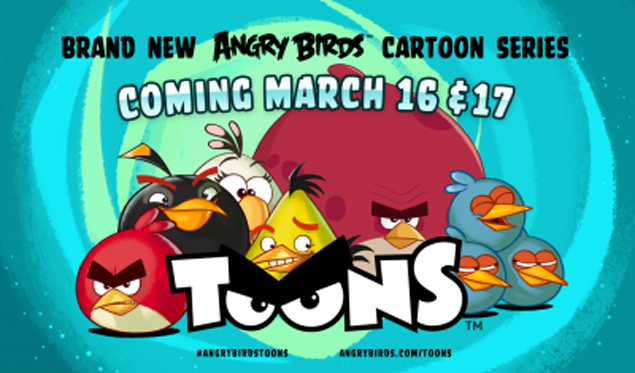 Alas! The much awaited animated cartoon series based on Rovio's wildly popular Angry Birds franchise is finally set to premiere on the weekend of March 16 and 17 2013.

Angry Birds Toons is an all-new animated series set on Piggy Island. The animated series will feature short animation episodes and will be aired every week starting the weekend of March 16th. The episodes promise to take viewers on the latest adventures of the furious avian flock and the egg-thirsty swine.

He further mentioned that he sees the Angry Birds cartoon series akin to timeless cartoon classics like the Pink Panther or Roadrunner that people can relate to and understand decades down the line.

If you want to know, "What makes Bomb Bird so angry? Why is the King Pig the King Pig? And are those mischievous piggies ever going to get hold of the eggs?", don't forget to 'Toon in' to watch Angry Birds Toons.

For more information, users can "Stay Tooned" at Rovio's dedicated website for the series http://www.angrybirds.com/toons.

Apart from this, Rovio Entertainment had already announced in December last year that it will be producing and financing an Angry Birds 3D animated movie which is to release in the summer of 2016.

Whether it's merchandising stuff animals or t-shirts, apps, theme parks in China, Britain and now Russia with other European countries to follow soon, Rovio has almost done it all. We say 'almost', because the Finnish gaming studio never really runs out of surprises.

Check out this preview of Angry Birds Toons set "deep in the heart of Piggy Island".