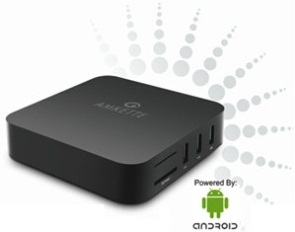 IT peripherals maker Amkette today launched a new device 'EvoTV' priced at Rs 9,995, which will allow users to surf Internet on their television sets in the same way they do on their computers.

The company is betting big on the device and expects as much as 50 per cent of its revenues to come from the product. Similar to Apple TV, EvoTV is a digital media device which allows users to access content like videos, games and websites using WiFi and broadband connection. It comes with a remote that acts like a mouse and has a mic to facilitate conversations on VoIP (like Skype).

"We are aiming at 70-75 per cent growth in revenues with this product. In the fiscal ended March, we had revenue of Rs 80 crore... This year, we expect EvoTV to contribute about 50 per cent of our revenues," Amkette Chief Executive Officer Rajiv K Bapna told PTI.

The Android operating system-based device will be available by June-end in Delhi (and NCR), Mumbai, Bangalore and Kolkata, and will be launched in 40 cities by the end of August this year.

"With EvoTV, we plan to revolutionalise the future of television globally. The Internet experience should not be limited to just PCs. Using this, users will be able to access games and content like videos, just like they would on a PC," Bapna said.

Google, which operates the Android platform, also plans to launch its set-top box 'Google TV' to allow viewers to use their device both for television viewing as well as accessing the Internet simultaneously without adjusting any cables. The company also plans to export the device to Middle East, Europe and North America in the next three months, he said.

The device is powered by twin ARM processors and comes preloaded with basic applications. Users can also download more apps from the Android application market - Google Play. "The device has been conceptualised, researched and designed in India (Bangalore and Delhi) and took 14 months in the making," Bapna said, adding that it will be manufactured in China.in China.
Comments