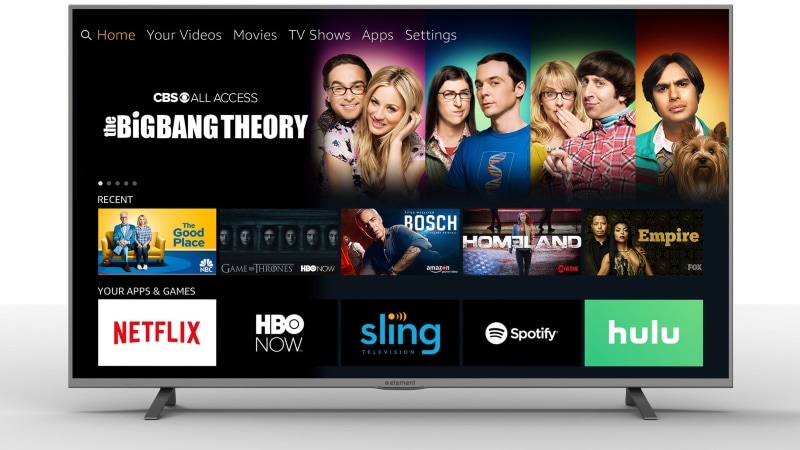 Amazon's streaming TV software will appear on a new line of smart TVs designed to blend streaming TV services and over-the-air channels, but not cable packages.

The TVs from Element Electronics will be sold under the Element and Westinghouse brands and will cost more than regular smart TVs from either brand. Officials say the TVs have better hardware for reliable streaming and aren't designed for casual viewers who buy TVs only to never hook them up to the internet.

While Samsung and LG are still developing their own smart TV systems, many other manufacturers have abandoned in-house efforts and are turning instead to streaming TV companies such as Roku, and now Amazon. The in-house efforts have largely been weak because few streaming services bother designing apps for them, and they don't have big teams to look for security threats.

For the new TVs, Amazon's Fire TV remote is getting common TV controls such as volume, while the on-screen menu is being adapted to incorporate live TV. Besides the rows of icons for various apps and streaming content, there's now a row just for shows currently available through an antenna. There's also a row for connected devices, such as game consoles and DVD players.

Have cable? You can hook that up to the TV, but you won't get the menu integration. You'll also have to use the cable's remote, as the Fire TV one lacks numbers for changing channels. With over-the-air broadcasts, you do that through the on-screen menu.

Though officials say cable integration may come, the decision to focus on over-the-air content reflects the growing practice of "cord-cutting" - ditching cable services in favor of online streaming services, including the ones offered on the Fire TV.

Prices range from $449 (roughly Rs. 28,800) for a 43-inch TV to $899 (roughly Rs. 57,650) for 65 inches. The new TVs, called Amazon Fire TV Edition, will be capable of displaying sharper video known as 4K resolution, though most TV shows and movies are available only in high definition, the standard on TVs today.