Amazon said on Wednesday it is bringing Alexa as well as Amazon Echo, Echo Dot, and Echo Plus smart speakers to India, its fastest growing marketplace, as the company looks to extend its lead over Google Assistant-powered Google Home, and Apple's Siri-powered HomePod in the smart speakers market. The company also said it will soon be bringing Amazon Prime Music, its music streaming service in the country. India is the fourth market after the United States, the United Kingdom, and Germany where Amazon has officially made Alexa and its smart speakers available, the company said.

The hockey puck-shaped Amazon Echo Dot, priced at Rs. 4,499 (roughly $69), is the most affordable Echo smart speaker from the company. Once you have set it up, you could ask the Echo Dot to play music, read you news, share reminders, and wake you up in the morning. The new Amazon Echo, which offers louder and improved sound quality, is priced at Rs. 9,999 (roughly $154). The Echo Plus, offers even better speakers than the Amazon Echo, and also lets users control other connected things in their house. It is priced at Rs. 14,999 (roughly $231). All the speakers need to be tethered to a power source at all times. The company says it will begin accepting the orders for the Echo speakers on an invite-only basis for now. Customers who are interested can request an invite from the website. Amazon India will begin shipping the Echo speakers in the country starting the week of October 30.

To spice things a little, Amazon says "eligible customers" will be able to avail an introductory offer which would waive 30 percent from the sticker price of the Echo smart speakers, and will also throw in a year-long membership of Amazon Prime. If you are already a Prime member, Amazon may extend your membership by one year, or provide an equivalent cashback - plans are still being finalised, a company representative told Gadgets 360. Amazon India said on Tuesday that it would soon end the introductory offer on Amazon Prime annual subscription, which it launched in the country last year, and will be charging customers Rs. 999 instead of Rs. 499. Amazon also said post the invite-only period, it will be making Echo smart speakers available from Croma, Reliance Digital stores and other offline retail chains. For now, there is no mention of the Echo Show and Echo Spot speakers. It was not immediately clear whether the Echo smart speakers would support voice calling in India. 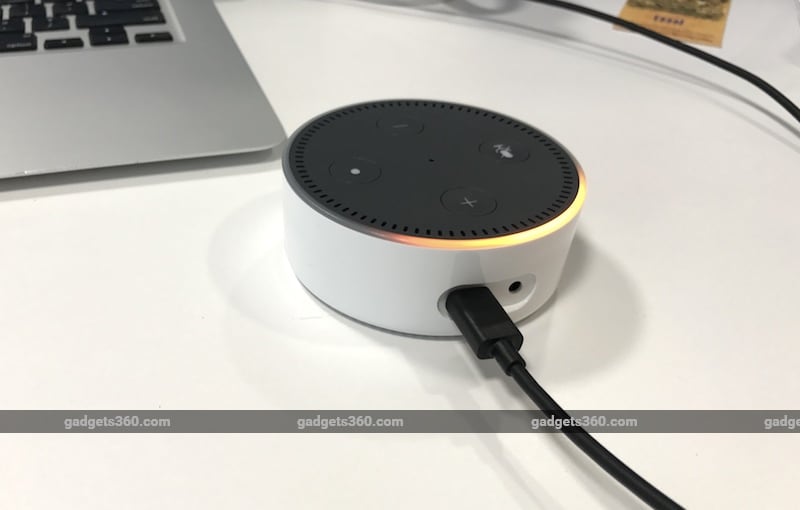 Amazon says Alexa has been customised for the Indian market. It supports an all-English voice with local pronunciations and intonations. It also understands local names, music titles, and places in non-English languages. The company said Indian developers have been working on to provide skills, tiny apps that allow developers to add personalised features and capabilities. More than 10,000 skills will be available to customers in India. Some key skills that users will be able to access are music streaming from Saavn, cricket updates from ESPNcricinfo, taxi service from Ola and Uber, food delivery from Zomato and Freshmenu, and news from outlets like NDTV, and Reuters among others.

Jan Dawson, chief analyst at Jackdaw Research, lauded Amazon's move. "This feels like yet another signal that Amazon is taking India very seriously as a market. And given how many English speakers there are in India it feels like a logical next step for Alexa after those markets it is already launched in," he said. "It sounds like the devices are going to be rather more expensive in India than they are in the US, but the early discounts will help with that. All of this will limit the addressable market to a relatively small slice of the Indian market, at least at first, but it's another step in Amazon's entry into what could be a really big market for them."

On the sidelines, Amazon said it is also expanding its Alexa Skills Kit and the Alexa Voice Service in India. "Tens of millions of customers are already using Alexa, and today we're excited to bring her to India with an all-new experience designed from the ground up for our customers in India," Dave Limp, senior vice president of Amazon Devices and Services said in a press statement.

An analyst found Amazon's strategy aggressive. "It's a wonderful strategy," Sanchit Vir Gogia, chief analyst and founder of marketing research firm Greyhound Knowledge Group told Gadgets 360. "Amazon has approached this [India's] market opportunity in a sophisticated and integrated manner," he said, adding that the company's new offering would further extend its positioning in the country.

The Indian arm of the e-commerce giant rivals Flipkart in the country. Much like Amazon Prime membership, Flipkart also maintains a Flipkart First subscription, as part of which it offers customers fast delivery of items. But unlike Amazon Prime membership, which includes access to Prime Video on-demand streaming service, Flipkart doesn't have any content in its yearly-offering. The launch of Alexa and Echo speakers, and the discount the company is offering to Prime customers is a "very aggressive packaging," Gogia said. "It makes sense. Content is the weak link in Flipkart's strategy. So from that perspective, it is going to put Amazon miles ahead of its competitors," he added.

The arrival of Alexa in India would further intensify the company's battle against Google and Flipkart, another analyst said. "India is a key market for Alexa, in part, of course, because of the sheer size of the population. However, it could also prove an important competitive weapon against Flipkart," Ross Rubin, principal analyst at Reticle Research told Gadgets 360. "The Echo Dot is the least expensive Alexa-enabled Echo product Amazon sells but other companies such as Anker have shown the cost can be brought down even further. That said, Amazon faces challenges versus other agents such as Google Assistant because of Android's momentum," he added.

According to marketing research firm eMarketer, Amazon Echo dominates the smart speakers market. The firm recently estimated that Amazon Echo would assume 70.6 percent of the market by the end of the year, with Google Home standing second at 23.8 percent of the pie.