The world's largest gadget show wrapped up on Friday, and the organizers said it was the biggest ever, beating last year's record in terms of the floor space companies purchased to display their wares.

What was it that drew more than 3,500 companies and 150,000 people to Las Vegas for this mega-event? Here are four gadgets that exemplified the top trends at this year's International CES.

Sony's 55-inch ultra-high-definition TV
The introduction of high-definition and flat-panel TVs sent U.S. shoppers on a half-decade buying spree as they tossed out old tube sets. Now that the old sets are mostly gone, sales of new TVs are falling. To lure buyers back, Asian TV makers are trying to pull the same trick again. They're making the sets sharper. This fall, Sony and LG introduced 84-inch sets with four times the resolution of regular high-definition sets. They provide stunning sharpness, but they're too big for most homes, and at more than $20,000, too expensive. At the show, the companies unveiled smaller "ultra-high-definition" sets, measuring 55 inches and 65 inches on the diagonal. They will go on sale this spring. Prices were not announced, but will presumably be a lot lower than for the 84-inch sets, perhaps under $10,000.

Both the size and price of these smaller ultra-HD TVs should make them easier buys, but the higher resolution will be a lot less noticeable on a smaller screen, unless viewers sit very close. Analysts expect ultra-HD to remain an exclusive niche product for some years. There's no easy way to get ultra-HD video content to the sets, so they will mostly be showing regular HD movies. However, the sets can "upscale" the video to make it look better than it does on a regular HD set.

Analyst James McQuivey of Forrester Research believes the TV makers are focusing on the wrong thing. He doesn't think consumers really care that much about picture quality.

"What matters most is not the number of pixels or the quality of the pixels themselves but the increasing convenience of the content's discovery and delivery. This is why TV makers should be investing in a better experience rather than a bigger one," McQuivey wrote in a blog post. 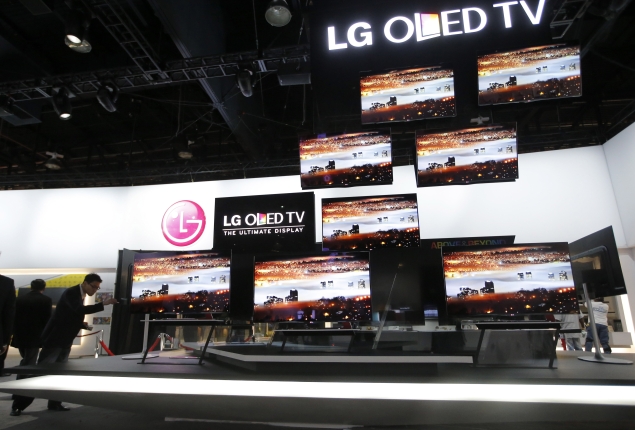 LG's 55-inch OLED TV
Organic light-emitting diodes, or OLEDs, make for thin, extremely colorful screens. They're already established in smartphone screens, and they have a lot of promise for other applications as well. For years, a promise is all they've represented. OLED screens are very hard to make in larger sizes. Now, LG is shipping a 55-inch OLED TV set in Korea, and is expected to bring it to the U.S. this spring for about $12,000.

Beyond being thin, power-thrifty and capable of extremely high color saturation, OLEDs are interesting for another reason they can bend. LCDs have to be laid down on flat glass substrates, but OLEDs can be laid down on flexible glass or plastic. The major obstacle here is that flexible substrates tend to let through air, which destroys OLEDs, but manufacturers seem to have tackled the problem. Samsung showed off a phone that can bend into a tube. It consisted of a rigid plastic box with electronics and an attached display that is as thin as a piece of paper. The company suggested that in the future, it could make displays that fold up like maps - big screens that fit in a pocket.

We're likely to see the benefits of bendy OLEDs sooner in a less eyebrow-raising but more practical implementation. It may never have occurred to you, but all electronic screens, except for cathode-ray tubes, are flat. With OLEDs, they don't have to be. LG and Sony showed TV sets with concave screens at the show - not very useful, but an interesting demonstration. In the future, you could have a phone with a screen that laps over onto the edges, providing you with "smart" buttons with labels that change depending on whether you're in camera mode or music mode. You could have a coffee mug with a wrap-around news and weather ticker. A revolution in design awaits.

By the way, you won't have to choose between ultra-HD and OLED screens Sony, Panasonic and LG showed prototype TVs that combine the technologies. 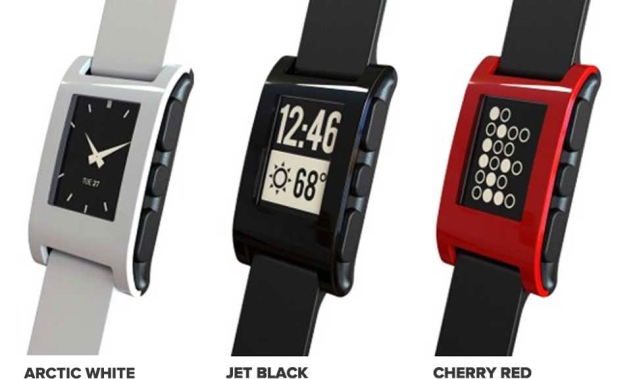 The Pebble Watch
The Pebble is a "smart" timepiece that can be programmed to do various things, including showing text messages sent to your phone. The high-resolution display is all digital, so it can be programmed with various cool "watch faces." But what's really interesting about the Pebble is how it came to be -and that it exists at all.

Young Canadian inventor Eric Migicovsky couldn't find conventional funding to make the watch, so he asked for money on Kickstarter, the biggest "crowdfunding" website. In essence, he asked people to buy watches before he actually had any to sell. The fundraising was a blowout success. Migicovsky raised $10.3 million by pre-selling 85,000 Pebbles. At CES, he announced that the watches were ready to ship.

Kickstarter's goal is to bring things and events into fruition that otherwise wouldn't happen, by creating a shortcut between the people who want to create something and the people willing to pay for it. The effect is starting to become apparent at CES. At least two other "smart" watches funded through Kickstarter were on display. Some startups were at the show to drum up interest in ongoing Kickstarter campaigns, including a Swedish company that wants to make a speaker with a transparent body, and a California outfit that wants to produce a swiveling, remote-controlled platform for cameras.

Creative Technology Ltd.'s Interactive Gesture Camera
This $150 camera, promoted by Intel, attaches to a computer much like a Webcam. From a single lens, it shoots the world in 3-D, using technology similar to radar. The idea is that you can perform hand gestures in the air in front of the camera, and it lets the computer interpret them. Why would you want this? That's not really clear yet, but a lot of effort is going into finding an answer. CES was boiling with gadgets attempting to break new ground when it comes to how we interact with computers and appliances like TV sets. The Nintendo Wii game console, with its innovative motion-sensing controllers, and the Microsoft Kinect add-on for the Xbox 360 console, which has its own 3-D-sensing camera, have inspired engineers to pursue ways to ditch -or at least complement- the keyboard, mouse, remote control and even the touchscreen.

Samsung's high-end TVs already let viewers use hand gestures to control volume, and it expanded the range of recognized gestures with this year's models. Startup Leap Motion was at the show with another depth-sensing camera kit, this one designed to mount next to a laptop's touch pad, looking upward.

So far, though, the "new interaction" field hasn't had a real hit since the Kinect. Consumers may be eager to lose the TV remote, but there's a holdup caused by the nature of the setup: to effectively control the TV, you need to take command not just of the TV, but of the cable or satellite set-top box. TV makers and the cable companies don't really talk to each other, and there's no sign of them uniting on a common approach. Only when both devices can be controlled by hand-waving can we permanently let the remote get lost between the couch cushions.