To pay or steal: How piracy is offering a better TV and movie viewing experience

Share on Facebook Tweet Snapchat Share Reddit Email Comment
Media piracy is so commonplace in India that not "torrenting" a show is considered unthinkable to most. That mindset is hurting the creators of shows, movies and games that we love, but the fact is that there are simply no good legal options available to Indians which provide the convenience and freedom that torrents give.

The process of downloading a torrent is extremely simple, but it can still be a deterrent for some. And since the only real advertisers that torrent hosts get are porn companies, the experience tends to feel a little uncomfortable. To watch a movie, you'd first have to find a torrent with the file you are looking for, and then download it using a BitTorrent client, before you watch. And managing your files was another problem - most people would end up using a front-end client like XBMC, which makes it possible to search through your collection or lets you sort by actor, or year or genre, and also presents all the files in a fancy graphical interface.

The pirates are now thinking in the same terms as the best commercial developers though, and so for instance, YTS (formerly YIFY torrents) has released an API connecting developers to its database of torrents. Other developers, like the team behind a new tool called Popcorn Time, have used that API and built a great looking interface that makes watching and downloading torrents a one-click process, with a graphical interface that's like Netflix, or its local alternatives like BoxTV or MunduTV.

A single click starts to play the movie after a little buffering, and by the time the movie finished playing, it was downloaded to your computer and could be watched again without streaming. With just these simple tweaks, watching a movie on Popcorn Time feels as convenient, and as safe, as watching it legally, but comes without any of the constraints of region-locking and delayed releases.

Popcorn Time is a very new service that had only started to grow but it's clearly caused enough pressure on the traditional models to cause them to push back. In an ideal world this would mean that old media businesses would adapt and make their content more readily accessible to people who want to pay, and update their revenue model. What happened, instead, is that Popcorn Time has closed down.

This might change soon, because according to a report in TorrentFreak, YTS will pick up the project and continue to develop Popcorn Time as a community driven project. You can download the new releases here.

Today, if you visit www.getpopcornti.me the project's creators talk about their pride in their software, and wrote:

You know what's the best thing about Popcorn Time? That tons of people agreed in unison that the movie industry has way too many ridiculous restrictions on way too many markets. Take Argentina for example: streaming providers seem to believe that "There's Something About Mary" is a recent movie. That movie would be old enough to vote here.

Delays, censorship, and no legal options
That's equally true for India, where the streaming services are still putting up episodes from the first season of Community - if you downloaded the torrents, you could be watching the fifth season instead. Why is there no middle ground? The reason lies in incredibly outdated licence agreements that don't take into account the reach and influence of the Internet.

What that means is that if you want to watch a show like Marvel's Agents of SHIELD in India, then you don't have any legal method of watching. Instead, you have to first get a cable/DTH connection. After that, you have to pay extra for a high-priced channel - even if you are already a subscriber to an expensive pack that gives you access to "all channels", incidentally. And then you've got to hope that you're at home and have nothing to do when the episode airs...

The alternative is to buy movies via iTunes, or the Google Play store. This is the legal method that most of us have been asking for, but as usual, it comes with a catch or two in India. For one thing, most people don't have a method to mirror their display to the large screen, which means paying to watch a movie on a tablet or a phone.

The second issue - of availability - is that the content available is often very dated. This is true globally, whether looking at stores like iTunes, or streaming services like Netflix. The new movies section on the Google Play store for example, has only movies from 2013. And then there's the problem of price. Instead of a reasonable monthly subscription, with these stores, you end up paying fairly hefty prices for individual films. So, The Darjeeling Limited is available for Rs. 350. A DVD of the same film is available for Rs. 327, on Amazon.in.

There is a whole section of movies under Rs. 50, but that's got a lot of movies like Jack and Jill, or Deuce Bigalow, Male Gigolo, which shouldn't even be distributed for free. If distributors are serious about taking on piracy, then they're going to have to start pricing more realistically as well. 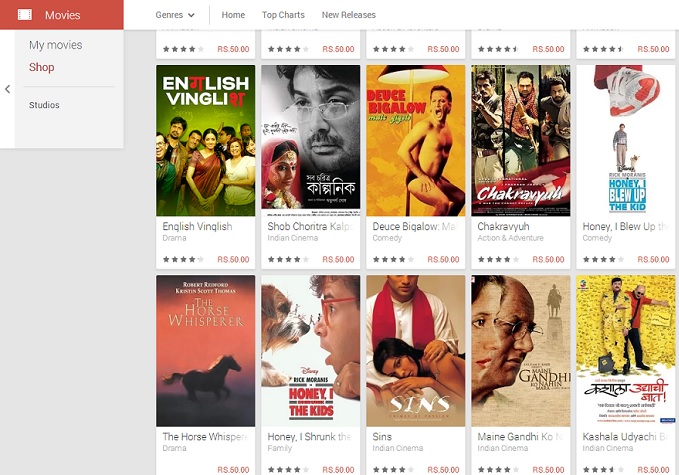 When you're downloading a show on the Internet you're obviously cutting into the creator's bottom line. But the fact that piracy is happening, and in such huge numbers, shows that there is a lot of demand for content that is not being met by legal means.

Of course, television (or movies) shouldn't be considered a basic necessity, and if the show you want to watch won't air for another six months, that doesn't justify taking it for free. Thanks to the Internet though, we're living in a borderless world, where you're going to hear about the shows you're missing out on again and again, even as the basic model of television remains unchanged for decades now.

As per the Popcorn Time team:

Piracy is not a people problem. It's a service problem. A problem created by an industry that portrays innovation as a threat to their antique recipe to collect value. It seems to everyone that they just don't care.

Asking nicely for a few bucks a month to watch whichever movie you want is a bit better than that.

If you're watching a show like House of Cards in India, then not only are you watching the show well behind the rest of the world, but you're not watching it in an ideal fashion either. This was a show that was designed with binge watching in mind - the thirteenth episode will have a callback to events in the first one, which makes sense when you watch the whole season over a weekend, but if you watch it as per the TV's schedule, then you're going to lose track of a lot of things.

If your set top box supports it, you could of course, record the episodes and watch them together, but that still means that you're not watching TV when it suits you - you would have to wait for the entire run to finish before you could even start!

Streaming services are just getting started here
In the US, HBO isn't interested in unbundling their digital offering from the cable access you have to pay for. This makes sense, because the digital revenue is only a drop in the bucket. In a country like India, what reason would they have to even make their content available? And if they did, would they need to censor it as mindlessly as they do for Indian television?

When the next season of Game of Thrones eventually airs on Indian television, you'd need to be a regular on Wikipedia to understand what was happening, since much of the plot is going to be censored away. As a torrent downloader, you'd get to watch when you want, without any censorship, or ads, or any other disturbances.

Streaming services have barely gotten a start in India - services like MunduTV, YuppTV and BoxTV do a good job of gathering local content. Many of the content creators are also making good use of apps and YouTube to share some of their most popular shows online.

On the other hand, BoxTV's "Just Added" section currently features Cocktail (1988), Chicken Little (2005) and Herbie Goes Bananas (1980) - and that's the best option around. While the audience which consumes shows like House of Cards is relatively small in India, that's a group which has money to spend as well. Young couples, or people who've just started working, are willing to spend money on shows, but access is still not available here, through either web-based or traditional methods. In the meantime, people are going to continue to pirate shows, and as Popcorn Time proves, pirates are able to offer a better experience on all levels by now - you get convenience, ease of use, and now a stylish display in one package.

Further reading: bittorrent, google play store, itunes store, movie torrents, movies, online streaming, piracy, popcorn time, streaming videos, torrentfreak
Gopal Sathe Email Gopal Gopal Sathe is the Editor of Gadgets 360. He has covered technology for 15 years. He has written about data use and privacy, and its use in politics. He has also written extensively about the latest devices, video games, and startups in India. Write to gopal@ndtv.com or get in touch on Twitter through his handle @gopalsathe with tips. More
Google unveils Android Wear project; LG, Motorola to make first smartwatches
NSA records all calls in targeted foreign nation: Report

To pay or steal: How piracy is offering a better TV and movie viewing experience
Comment