With bandwidth and reliability of Internet connections still being a problem in India, cord cutting isn't as prominent here as it is in the West. That's why, at an event in Mumbai on Tuesday, Sony launched Le Plex HD, a new premium cable destination for Hollywood films, which, it says, will "serve audiences who seek entertainment beyond mainstream Hollywood movies".

The new channel sits alongside Sony's existing properties in the English-language domain: Sony PIX and AXN. Saurabh Yagnik, EVP and Business Head (English Cluster), Sony Pictures Networks India, believes there is a market in the country - the "Hollywood loyalists", as Sony terms them - which is underserved. Le Plex is trying to cater to this segment, Yagnik added, by not only bringing in "critically acclaimed films" but also by building "a community of quality movie lovers". It's clear that whether the channels acknowledge online streaming platforms or not, they're waking up to the risk these services pose, and are taking steps to cut them off before they gain too much traction.

The highlight of the channel is what Sony is calling Le Premiere. It will be a showcase for Indian television premieres every Sunday, at 1pm and 9pm. That means Le Plex will present 52 Hollywood films, which have not been aired on television in India before this, in the space of 52 weeks. Le Plex's library consists of more than 400 titles - 200 of those are award-winning ventures, with 500 awards to their name - Sony claimed in its announcement.

At first glance, the new channel comes across as Sony's take on Star's premium Hollywood films channel - Star Movies Select HD. But the company says it wants to go beyond that in an attempt to build a sense of loyalty by driving talk across social platforms. To bring audiences together, Sony has brought on board Bollywood director Zoya Akhtar to serve as its community ambassador, which is fancy talk for being the face of the channel. 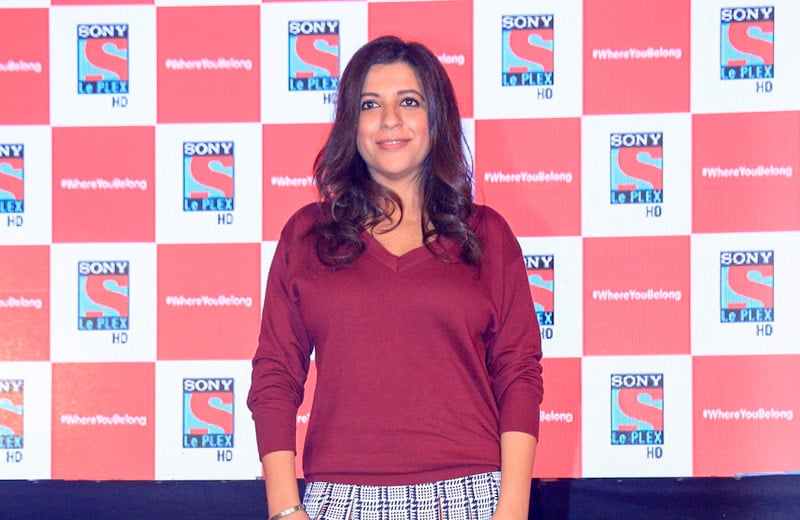 (Also see: Everyone's Making a Push for Original Programming, but Does it Matter?)

Sony sees Le Plex as fostering a community of cine-lovers, with great emphasis on how "Hollywood loyalists" are the core to its new venture.

At the outset, these include "It's 9 o'talk", and "The Magicians: Behind the Films", two segments that are meant to drive conversations around the films. With the former, movies in the weekday 9pm time slot will be drawn based on a common thread across different performers and the like, with Yagnik giving the example of well-known actors and actresses who are yet to win an Academy Award for their work. This segment, he said at the event, has been inspired by listicles. In this case, the numbered-bullet article would be called "X actors and actresses yet to win an Oscar".

The Magicians will bring a behind the scenes look for movies such as Inglourious Basterds, Schindler's List, Taxi Driver, and Gladiator, giving viewers "first-of-its-kind conversations about magicians who work behind the camera", Sony added in its announcement. You'll be able to catch it on Le Plex every Saturday at 9pm, during the film.

Despite its promise of airing critically acclaimed movies outside the blockbuster scene, running a 24-hour channel does come with its own restrictions. As part of its line-up, Le Plex also has films that didn't garner much favour from critics such as Serena, Pearl Harbor, War Room, Stepmom, and The Fan. And while the channel does cater to non-mainstream audiences, Le Plex doesn't have any non-Hollywood films just yet, which Sony figured were probably too risky to bet on. For what it's worth, Yagnik said that they haven't ruled out the possibility. (Also see: Behind the Scenes With Indian TV Channels' Self-Censors)

Being a TV channel also means following the norms of broadcasting, and Le Plex will follow the certificates issued by the Central Board of Film Certification (CBFC). As for films that never released in theatres in India, Sony will approach CBFC to get proper certification before airing. So if you were hoping to catch Straight Outta Compton in all its glory, you're better off buying a Blu-ray.

Le Plex is a bold move from Sony though, with its existence as an HD-only service, targeted audience being a niche and digital platforms the long-term future. Seven million households have HD connections via their direct-to-home (DTH) subscriptions, Yagnik said, and he expects 80-85 per cent of those to take on Le Plex.

Yagnik doesn't regard Netflix and other such platforms as competitors, but deems it as a good thing as they drive up consumption as a whole instead of splitting users, he says. TV is here to stay, he adds, saying they both have space to grow alongside each other. Sony has doubled its content investment in the last 2-3 years in belief of that continued existence, and the launch of Le Plex shows that despite the rise of streaming services around the world and their growing presence here, television still remains king in India.

Sony Le Plex HD is already available on Tata Sky and Airtel Digital TV nationwide, along with a handful of other players. Sony is in talks with the others - Videocon D2H, Dish TV, and Reliance Digital TV - to get the channel added as well.

Further reading: Sony, Sony Le Plex, Star Movies, Hollywood
Akhil Arora Email Akhil Akhil Arora covers entertainment for Gadgets 360, interviewing stars such as Christian Bale and Anurag Kashyap, covering series premieres, product and service launches across the globe, and looking at American blockbusters and Indian dramas from a global socio-political and feminist perspective. As a Rotten Tomatoes-certified film critic, Akhil has reviewed over 150 movies and TV shows in over half a decade at Gadgets 360. When he is not completely caught up with new film and TV releases, Akhil ...More
Reliance Jio's Controversial Beginning Explained in 5 Facts
CSC-HP Merger Deal Gets Approval From Competition Commission of India