Stream TV to Your Phone Without Internet? Voice Search for All Your Content? This Box Wants to Do All That and More

If you want to watch a streaming video, with the right gadgets, it can be as easy as saying the name of the show or movie, and relaxing with some popcorn. With your TV, when it's time to watch an episode of Shark Tank, you're best off memorising the time it plays, and the channel number, and then tapping it out on the remote. There are a number of companies that are working to address this - whether through smart boxes that can connect to your TV, like the Google Chromecast and Amazon Fire TV Stick. There are smart TVs that have their own apps, and most recently, we're seeing smart TV set top boxes from the likes of Airtel and Videocon.

However, most of these might help you find and access online content, but don’t do much to improve the linear TV experience. While the Airtel box does offer voice search on broadcast TV, there are multiple steps involved in, say, moving between Netflix and what’s on "TV". One solution is the designed-in-India-but-made-for-US Caavo set top box. It brings together all your HDMI inputs, so content from your Fire TV, Roku player, and cable box (for example) can all be controlled and searched through a single, smart, and simple interface. Unfortunately, it's targeted at the US, months from launch, and will cost around $400 (around Rs. 27,000). Bengaluru-based Sensara, which released the Sensy smart remote, is also taking a shot at this problem with its upcoming Sensy Fusion smart box, which is designed for Indian needs (so there are only two HDMI inputs, for example), but will also be significantly cheaper, priced at around the Rs. 5,000 mark.

From app to set top box
The company raised funding in January 2016, when it had released a smart EPG for Android. Its founder, Bharath Mohan, has spent the last 12 years doing R&D on search, information retrieval, and content discovery systems, starting from his PhD at IISc in Bengaluru, and then continuing on the topic for Google. However, Mohan wanted to build something that would be useful to people outside of Silicon Valley, he tells Gadgets 360, and this led to think about television, and more importantly, television as content that has to be searched, discovered, and consumed.

"We started investing in technology areas that would make TV a breeze to use," says Mohan. "We needed a TV search engine. We had to look at Linear TV and Non Linear TV together. TV had to be a joy to discover, personalise and search."

We're sitting in the Sensara office, a small space in the South Bengaluru neighbourhood of Banashankari. The conversation is taking place in a TV room to the side of the main office. The space is filled with set top boxes from all DTH players, and also smart TV boxes. A maze of HMDI cables lead into the two TVs present, and the coffee table in front of the TV stand is covered in remotes.

"What we realised is that the EPG app was just a starting point - it was helpful to find things you wanted, but then you still had to use the remote on your TV, and navigate through that EPG, which gave a poor experience," continues Mohan. "That's why we came up with the Sensy remote."

The Sensy Smart Remoteis a simple IR blaster that you hang or place near your TV - it pairs smoothly with the app and allows you to take full control of the TV using your phone. So you can do something like search for "Salman Khan action movies on TV right now" and get an instant listing. When you start the app the first time, you need to set up the type of TV and DTH set top box you're using, and after that, you can automatically see the search results and then tap the one you want to change the channel on the TV.

Of course if your phone already has an IR blaster - which is not as common as it used to be - you can ditch the hardware altogether, and get the Sensy app on your phone.

It's a great experience, but the reliance on the smartphone does get a little cumbersome. If you could pick up a remote and get the same functionality, it's even simpler, and that's exactly what Mohan and his team want to offer with Sensara's upcoming Sensy Fusion box. 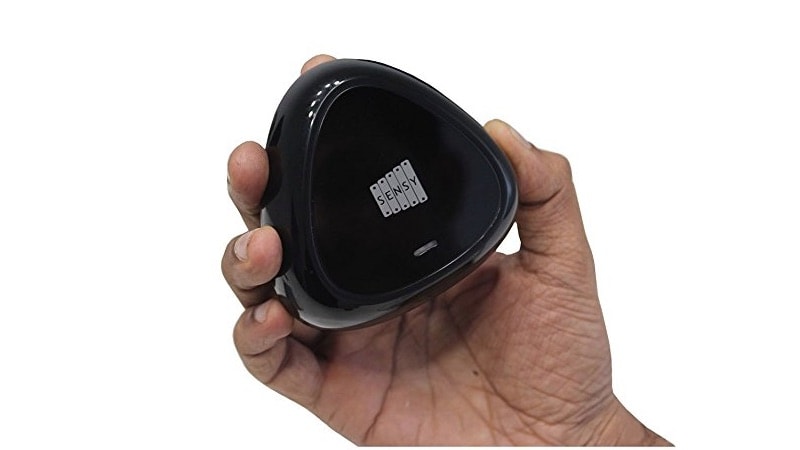 What does a box enable?
The Sensy Fusion box can basically be used to do everything that the EPG app and remote combination could do - so you can pick up the remote, talk into the mic, and have it automatically switch to your favourite channel, or find shows and set reminders. Or if you browse to something like Avengers, it would also show you YouTube links to watch related content such as mo-cap sessions, featurettes, and so on. The guide also recommends shows and channels based on your viewing habits, just like the mobile app.

The Fusion box is an HDMI passthrough - so you can plug your DTH box (and up to one other device) into the Fusion box, which in turn sends the HDMI signal to your TV. This allows the Fusion UI to be added as an overlay on top of your active content. You don't need to switch to a different HDMI input or do anything like that - just use the Sensy Fusion remote instead of your set top box remote, and tell it what you want to do.

As of now, the Fusion is still very much a prototype, and most of the demo we saw is actually being done on an instance running on a PC in the room. However, Mohan is able to show off some of the other features that having a set top box instead of just the smartphone app could enable.

"What we're doing is based on Android TV, and it adds a lot of smart features to your TV," says Mohan. "You can download apps and play games on [your] TV, mirror videos and pictures, do video chat from your TV, record TV and watch later, or play video from a storage device like an HDD or USB drive."

All of this is pretty standard, but Mohan tells us about a few other interesting features. For one, you could send just sound from your TV to your phone - so you will not need a Bluetooth headset to listen to your TV wirelessly; the Fusion box connects to your phone via Bluetooth, and you can connect your wired headset to the phone to listen to the audio from your TV without disturbing others at night. 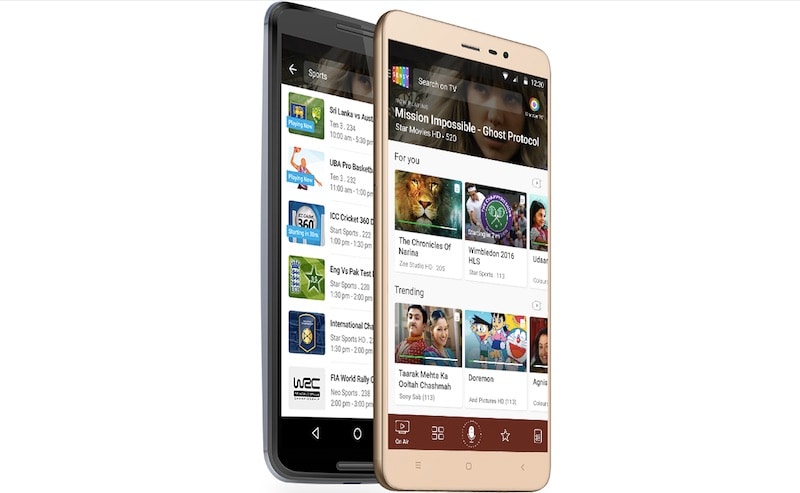 Then, Mohan demoes what could be the killer feature - the ability to stream video from your TV to your phone or tablet over Wi-Fi "without using the Internet", opening up the ability to watch live TV in a room without a TV.

But the feature that we are looking forward to the most actually has little to do with live TV. Mohan tells us that the Sensara Fusion box will feature universal search. This means that when you use the voice search on the remote, it doesn't just look at results from live TV - it'll also show top results from your apps; including YouTube, Netflix, Prime Video, and so on, and the results are deep links - selecting these launches the relevant app with the content ready to go.

That's exactly how it works on an Android phone right now - search for Orange Is the New Black, for instance, and one of the results on your phone will be the Netflix app (assuming it's installed), tapping which will load the show. Considering that one of the big hassles of TV these days is knowing what content is available on which platform, having a single place to search for everything is a definite plus. Apple has been attempting to offer something similar with the TV app on the Apple TV, but with limited success, as not all providers have been integrated just yet.

Getting to users
The Sensy Fusion box sounds like a really interesting device, and we can't wait to try it out when the company releases it - Mohan says the release window will be end-July; deliveries will be immediate. However, Rs. 5,000 for a second set-top box is going to be a hurdle. The highly affordable Sensy Smart Remote, which really offers a big step up from the EPG you're living with, sold about 1,200 units, despite being priced at a little over Rs. 1,000.

The Fusion box is a significant upgrade, as it takes away the dependency on your smartphone, and adds a few really cool features too. But it's not exactly priced as an impulse buy for most people either. Mohan says that the company will be taking the direct sales route via Amazon to make sure the device is as affordable as possible, but adds that he's also open to working with others.

Although he can't reveal the names of the companies because the discussions are ongoing, Mohan tells us that Sensara is exploring working with DTH providers as a white-label service as well. "If people want to integrate our technology so that the consumer gets the same great experience, using just their DTH set top box, we're happy to work with the companies," says Mohan. "We're also talking to smart TV makers, and looking at pre-installs of the Sensy app on TVs."

Further reading: Sensy, Sensara, Sensy Fusion, TV Remote, EPG, Program Guide
Gopal Sathe Email Gopal Gopal Sathe is the Editor of Gadgets 360. He has covered technology for 15 years. He has written about data use and privacy, and its use in politics. He has also written extensively about the latest devices, video games, and startups in India. Write to gopal@ndtv.com or get in touch on Twitter through his handle @gopalsathe with tips. More
Apple Seeks 'Siri Event Maven' to Keep the Assistant Up-to-Date on Culture
Orbiting Supermassive Black Holes Discovered for First Time

Stream TV to Your Phone Without Internet? Voice Search for All Your Content? This Box Wants to Do All That and More
Comment