We’ve been following BBC’s long-in-the-making natural history programme Planet Earth II with Sir David Attenborough as narrator from its humble (viral) beginnings - following animals, reptiles, birds, and all varieties of life across the world’s many islands, its majestic peaks scattered across the globe, and the dense jungles that hold so much of our planet’s life.

Now into its fourth week, Planet Earth II’s latest episode shifted its focus to one of the toughest places in the world to live - deserts. From the Namib Desert in southern Africa, to the Lomas de lachay on Peru’s coast, the hour-long episode gave us an extended look at how wildlife has adapted to survive these brutal conditions.

After watching Planet Earth II ‘Deserts’, we sat down to have a discussion of the episode’s events - what captivated us and what left us wanting. What follows is a condensed and edited version of the same.

Pranay Parab: After taking us to the Earth’s jungles where there’s plenty of food and conditions are ideal for life to thrive, Planet Earth II introduces us to deserts. The struggle for survival here involves beating the heat and finding water. I was very impressed by the fogstand beetle that lives in the Namib desert of southern Africa. It climbs to the top of massive dunes, about as hard as it is for humans to climb a mountain twice the size of Everest, and does a headstand. All of this for water. 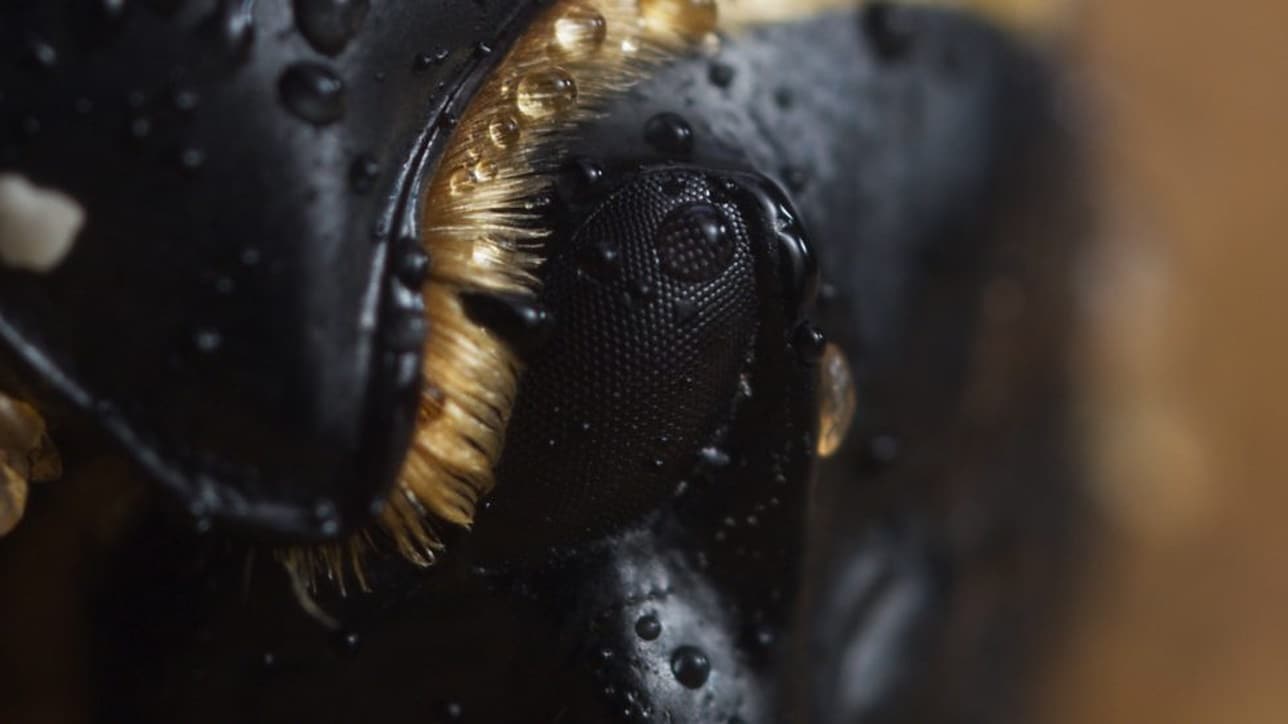 Early morning fog offers a rare chance to grab a drink. The beetle’s skin can hold on to moisture from the fog, allowing it to drink water in an otherwise arid zone. If life weren’t hard enough for these beetles, the food chain just came calling. A predator (namaqua chameleon) waits for them to begin the descent and attacks them, because they’re juicier once they’ve had all this water. The struggle for survival, as always, is ruthless.

Akhil Arora: And that truly sets the desert species apart, as they have had to struggle more than others. Look at the sandgrouse birds, who make their nest hours away from waterholes to keep their young safe from predators. But since water is so crucial to survival, this inevitably results in the male sandgrouse having to fly almost 200km every day to fetch water for the family.

Unlike us, the poor bird doesn’t have the option of bottles. Instead, its breast feathers have adapted to soak up water just like a sponge, Attenborough informs us. Getting there is just half the job - even the adult males are prey for the goshawk, which would make light work of baby sandgrouse. So they have to survive the goshawk’s attacks, who waits by the waterholes they are bound to stop at. And it’s not a week’s work either - the male sandgrouse will be making this trip in the desert’s heat for 2 months, before the chicks are big enough to fly themselves.

Such problems appear often in the episode. Animals are constantly on the move for water, be it zebras, elephants, or mustangs. For the last of those, having the bragging rights over a waterhole is deeply connected to having females to mate with. Lose a fight with another stallion and you’re probably done for good. For the desert's inhabitants - putting it quite unironically - I’ve to say the struggle is real. 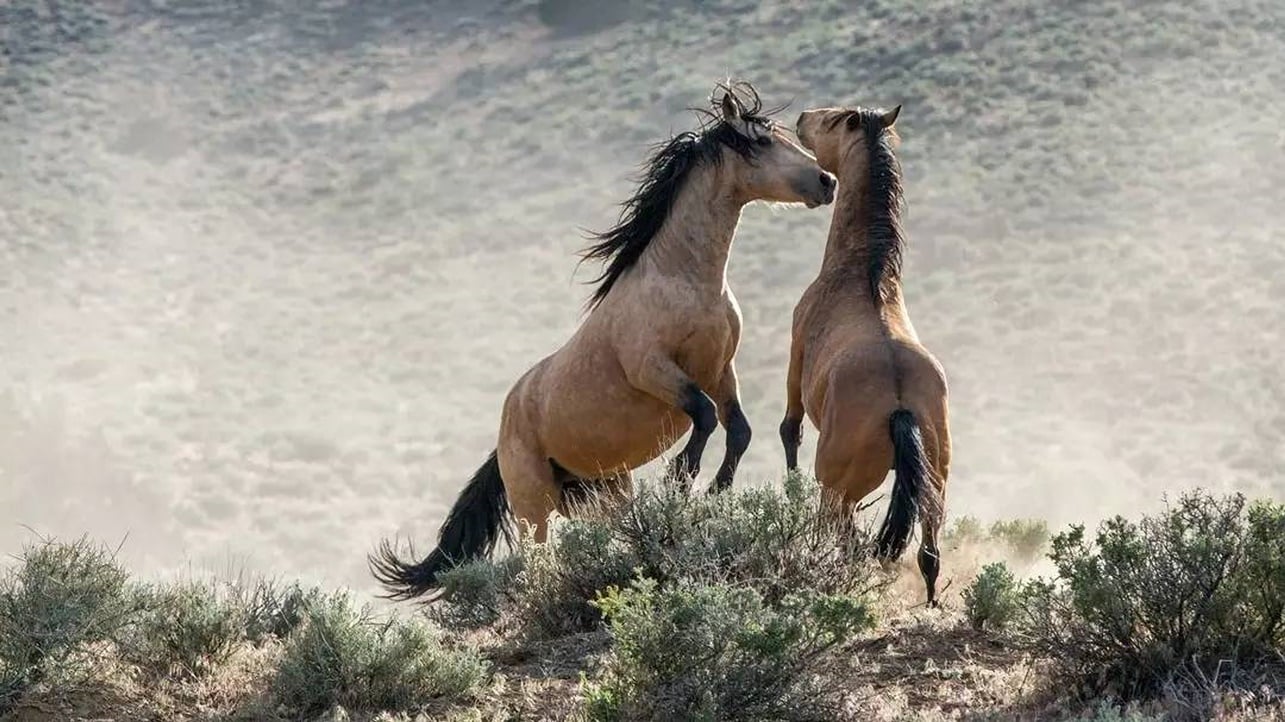 Pranay: That mustang fight in Nevada was quite odd. They seemed to bite and try to kick each other without landing a solid blow and suddenly the fight was over with the intruder winning. It seemed more like a win on technical grounds as opposed to a KO, which the narrative promised. But yes, you’re right about the importance of water in the desert. For most of the animals’ existence is linked to a tiny waterhole in the middle of nowhere.

Elephants walking across the desert, with older females leading the clan to waterholes they may have visited decades ago, was almost heartbreaking. A similar scene was there in the first episode of the original Planet Earth series. I remember one scene where a baby elephant gets lost and starts walking in the wrong direction - towards certain death. Thankfully those scenes weren’t repeated in this episode.

I can’t believe we haven’t mentioned the lions yet. A pride of lions hunting together to try and kill a giraffe - that was a great scene. The thing about hunting in deserts is that there is no room for cover or much stealth. The land is barren so prey can see predators coming from far off. This means that those lions have to hunt in packs, which is a rare example of apex predators hunting in teams. Giraffes have the speed and stamina to outrun lions, and the lions’ only hope for food is to drive the giraffe towards an ambush. In this case, it fails. The lioness’ jump to attack the giraffe was one of the best shots of the show so far.

Akhil: Speaking of great shots (with a sprinkle of personal bias because it made me crack up), I loved the one with the hawk walking on foot, when the pack was out to catch ground squirrels in USA’s Sonoran desert. It was almost as if it was walking for the first time in his life, and was still coming to grips with how you’re supposed to pick up your feet and then land them in the most economic way - you know something we all learn naturally as a child. Instead, the hawk was hopping its way forward, quite awkwardly. The dancing shovel snouted lizard was a delight to watch as well.

Another segment that impressed me visually - not for the splendor per se, but the work that must have gone into it - was the desert at night in southern Africa. First, we were introduced to the golden mole - a completely blind mammal who uses the cover of the sand’s top layer to pounce on prey. It’s an ingenious method, and one that works really well for the creature. And then we got to see the desert long-eared bat in Israel’s Negev desert, who - just like the American hawks - has to hunt on the ground for food.

Its preferred night-time meal? Deathstalker scorpions, who possess one of the most powerful venoms in the world. That scene was spine-tingling to watch, as the bat fought off the scorpion in pitch black darkness that made them both effectively blind. Even after trying its best at dodging, the bat ended up getting stung a couple of times, which means the bat has become partially immune. I imagine it still hurts a lot though, and he has to go through that every night at least with three scorpions. Ouch.

Pranay: Another “ouch” moment was the part where the butcherbird strung corpses of its prey on blades of grass. Gruesome scene, but then it’s doing this to keep others from stealing its food. It has to feed its chicks after all.

However, the most testing scenes from this episodes focused on the locusts in the deserts of Madagascar. In arid areas it doesn’t rain much but sometimes the really short but heavy rain spell leads to flash floods. That means there’s too much food in a place where there was none, leading to a plague of locusts.

The Planet Earth II crew got some sensational shots of locust hoppers swarming the landscape and devouring all the food they could get. They also got a great timelapse type shot of these locusts rapidly maturing into winged adults. Then the shots showing billions of locusts absolutely destroying all plant life and crops in Madagascar were stunning too. It reminded me of the impact of humans on Earth. Like a plague we have spread across the planet, stripping it of resources and destroying nature everywhere we go, while not doing anywhere near enough to replenish it. 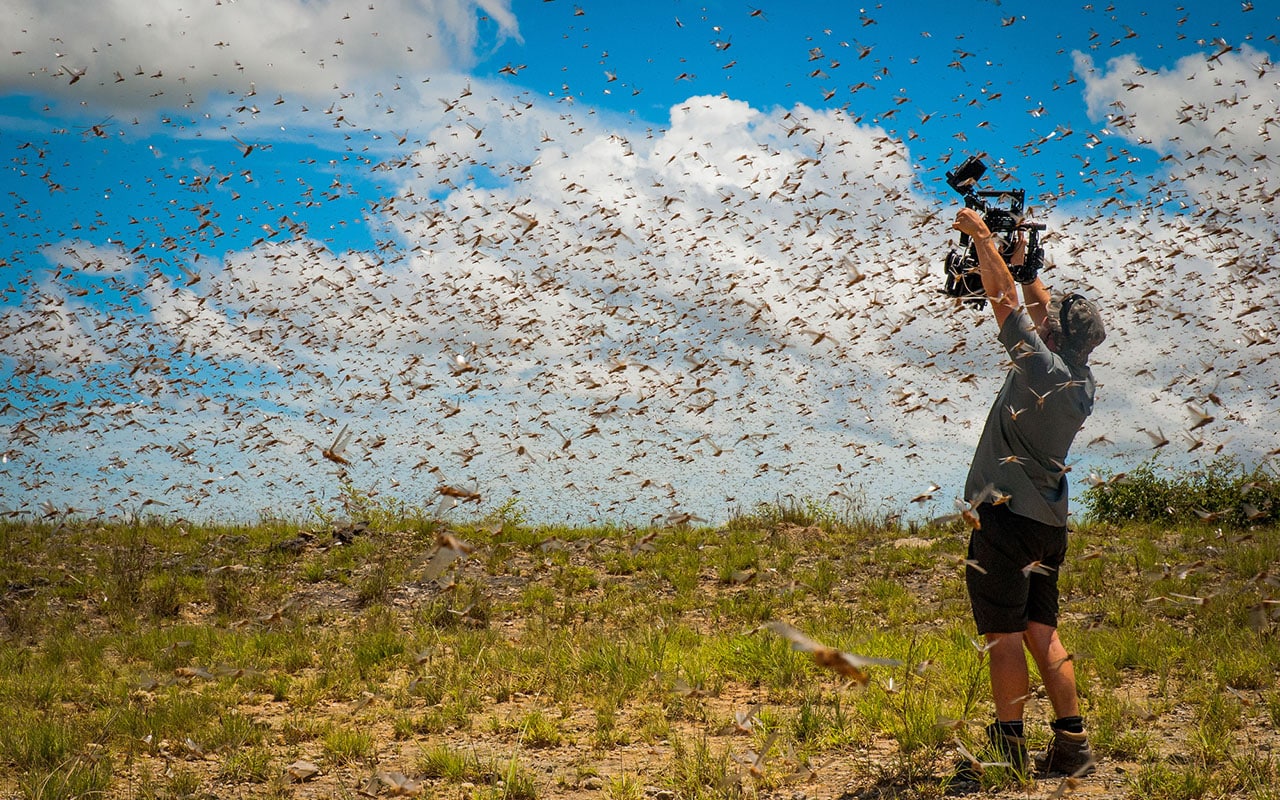 These locusts die when the food supply is destroyed. I was shocked to see this happening over such a short period, but humans have been doing the same to Earth over a long period. If the cycle doesn’t stop, humans face a real danger of extinction. There is no other place we can settle just yet and destroying our richest heritage is definitely not something that fills me with hope for our future.

Akhil: At our current levels of consumption, not much can. The bigger problem is - with the locusts, the FAO will find a way to put an end to their menace. But there’s no one around to keep a check on the troubles we cause. And our process of self-regulation is harmed by selfish mentalities - be it in the form of individual irresponsible behaviour on a global scale, or the populist movement that is driving so-called developed nations in the West towards protectionism.

So when the same countries suggest pulling out of the Paris Agreement, or easing regulations to empower conventional-energy businesses, it’s not just troubling for the lives of the people in that part of the world. It affects everyone, some more than others as the deserts episode quite clearly states. Not only are 130,000 sq-km of grasslands turning into deserts every year, but these places are witnessing a quicker rise in temperatures than anywhere else.

As a whole, global warming affects tropical areas - i.e. around the Equator - disproportionately more. That means living in India, we not only have to contend with some of the densest cities on the planet, and some of the most polluted, but also the hottest going forward.