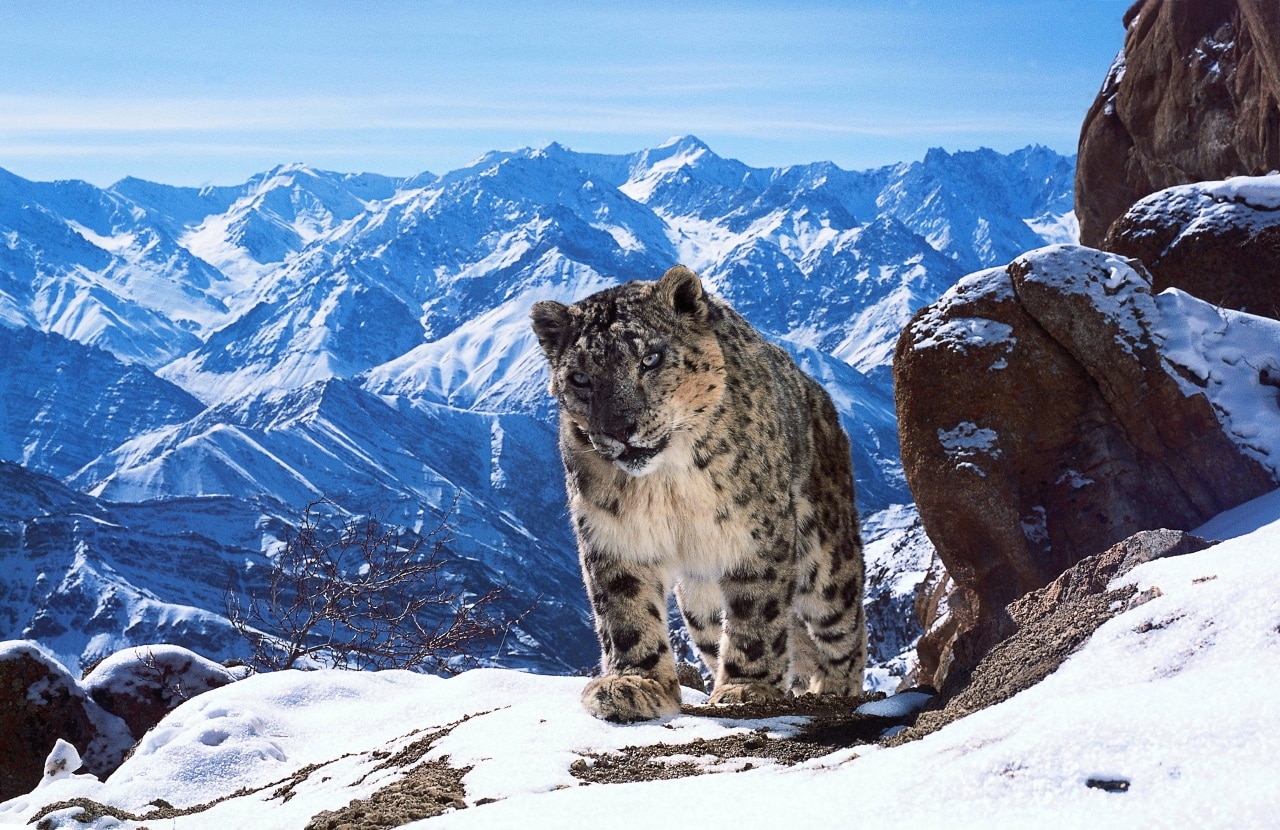 Planet Earth II, the follow-up to the 2006 original series with Sir David Attenborough as narrator, started its six-episode run last week. You might know it as that show with the viral baby iguana vs snakes clip. Fascinated as we were with the first episode, we were naturally looking forward to the second one.

The second episode, called ‘Mountains’, focused on life in the mountainous ranges around the world - from Himalayas in Asia, the Rockies in North America, the Andes in South America, to the Alps in Europe. High up in the mountains, the struggle for survival involves harsh weather and low oxygen levels, and some plants and animals thrive in spite of that. From the intrepid ibex to the stealthy snow leopard, this episode showcased a diverse set of species.

Just like last week, we had a discussion around the episode’s events, the moments we loved, and the harsh realities of nature. What follows is a condensed and edited version of the same.

Pranay Parab: It seems as if every episode of Planet Earth II leaves me speechless. As the episode progresses my jaw slowly drops to the floor and as soon as the episode ends I spend a few minutes in stunned silence, thinking about all the amazing things I just watched. In the case of episode two, pretty much everything left me speechless but the part about the golden eagles was the highlight. It’s one of those moments when you are caught between marvelling at the beauty of nature and at just how incredibly difficult it must have been to film this.

The crew actually used a hang glider and jumped from a height of 3,000m to simulate the dive of a Golden Eagle. It can reach speeds of up to 200km/h while diving towards its prey and the team did a fantastic job of shooting this. They also used a camera mounted on a golden eagle to film this, which was equally impressive. I haven’t even mentioned the awesome slow-mo shot of the two eagles fighting and the part where those pesky crows kept annoying the eagle.

Akhil Arora: That’s the power of great art, I believe. And it’s not just about the astounding visuals for me, but how such moments can move and inspire you to become involved. The episode also talked about how the mountains are hurting owing to human activities - be it encroachment, or climate change. Protecting the wildlife, and their habitats, is our responsibility - and we need to do more now than ever. Otherwise, it’ll be too late.

Going back to the golden eagles segment, I think it’s worth pointing that the footage captured using the mounted camera was done using a captive bird. While there is a section of the populace that is quite unhappy about this, I personally don’t see anything wrong with it if it gets your point across - which in this case was showing viewers what an eagle’s vision looks like. For what it’s worth, BBC has admitted to the fact - though it would have been better to let audiences know the same during the episode.

At the same time, that doesn’t take anything away from most of their work surrounding eagles in the Alps. For the slow-mo scene you mentioned, the cameraman had to pitch a tent in the dark and sit there for 100 hours before he got the perfect shot. That passion and dedication can be seen across the breadth of the episodes, be it chasing eagles, or the Andean flamingoes in temperatures that would burn “uncovered human skin” in four minutes.

Pranay: The hard work they put in definitely paid off with the weird flamingo “courtship dance”. What on earth were those flamingoes doing? They didn’t even stop to feed themselves while marching in a group in that heat. The giant groundsels on Mount Kenya (dendrosenecio keniodendron, for the science lovers) are another example of life adapting to extreme weather conditions. During the night it wraps its leaves around its sensitive centre to protect itself from the freezing cold. Imagine being born with a quilt attached to your body.

That reminds me, just what were those baby ibex doing up that steep cliff with hardly any footholds? I was so scared while watching that. It’d have broken my heart if one of them fell down the steep cliff. Thankfully they did not, and managed to escape the hunting fox as well. It made me aware of my tendency to side with the prey at all times.

We all love the underdog and that tends to take attention away from the importance of the predator in the food chain. If the predators are extinct then there will be an abundance of prey, and the resulting overpopulation could have a domino effect on all aspects of wildlife. That makes me worry about snow leopards, which are endangered species. The snow leopard segment has to be the most impressive part of Planet Earth II’s second episode, right?

Akhil: In more ways than one, yes. And not just because snow leopards are one of my favourite animals. Most people won’t realise or know this, but ‘Mountains’ was also the name for the second episode of the original series, 2006’s Planet Earth. The three years the crew spent in getting close-up footage of snow leopards then was remarkable in itself - as it was the first-ever footage of the majestic species.

Attenborough reiterated that in the latest episode on Sunday. Snow leopards lead a very solitary life, and not much is still known about them. We now know much more, thanks to the efforts of Planet Earth, once again. The segment followed a pair of snow leopards - a mother and a daughter - and showed some truly interesting aspects of their lives. Whereas humans would carve into a rock or use Facebook in today’s world, snow leopards have a unique manner of checking in at a place - a combination of cheek rubbing and a spray of urine.

And then there’s the mating process, which the crew filmed from across the valley, as shown in the closing Planet Earth Diaries segment. The two-year-old cub was completely dependent on her snow leopard mother, but males kill cubs that are not their own. What astonished me was despite her child’s life at risk, the snow leopard has no way of controlling the biological urge to mate.

Instead, she ends up broadcasting her availability from the mountain rooftops, quite literally. It doesn’t help that two males turn up, and the mother not only has to protect herself but the cub as well. The entire sequence was both frightening and eye-opening, and left me wondering if the cub was going to be okay. So it was wonderful that Planet Earth II gave us the happily-lived-after version of that scene, with both mother and daughter doing well.

Long live motion-activated cameras, that have made so much of the new series possible.

Pranay: Including the dance of the grizzly bears - my third favourite moment from the episode. The soundtrack very conveniently takes an odd turn to make the bears’ dance look ludicrous. Once they emerge from hibernation, they rub their bodies against tree trunks to shed fur, which leads to this hilarious scene.

Speaking of funny things, I really enjoyed it when the ducks “laughed” at the bobcat that was hunting them. If the bobcat burying its head in the snow while hunting wasn’t funny enough, that scene will crack you up. It was great to see that the bobcat stepped only on rocks to avoid the crunching sound of the snow. Its hatred of water was quite funny too. The poor thing was so uncomfortable when it got wet.

But the episode’s conclusion was a sobering reminder of how badly humans are upsetting the system. Not only is global warming leading to glaciers melting and rising sea levels, it’s also driving a whole bunch of species towards extinction.

Akhil: At an alarming rate nonetheless. The episode mentioned that 50 per cent of glaciers in the Andes have disappeared in just the last three decades. That's terrible - Earth has existed in one form or another for billions of years, and here humans come along and wreck havoc in an unimaginable fashion. A lot of that is down to our numbers - the planet cannot take 7 billion of advanced and resources-demanding species such as us.

India comprises a big portion of that, more than a seventh. And while our per capita energy consumption is far less than typical Western countries, it's only on the rise. I was watching the second season premiere of Years of Living Dangerously the other day, which saw comedian David Letterman sit down with Prime Minister Narendra Modi.

There, PM Modi said that while he's fully committed to renewable energy consumption, he can't deliver energy to 350 million Indians who are living without power without looking towards alternatives. To achieve those needs, India will burn twice as much coal as it does now by 2030.

Add to that the election of climate-change-denier Donald Trump as US President, and things are only going to get worse. And while we might be able to isolate ourselves in artificial environments, the animals don't have that luxury. Climate change is such an important issue of our time, and I feel the future generations are going to hate us for not doing more. For them, documentaries like Planet Earth might be the only way to see some of these animals.