How to Download Netflix Shows and Movies, and Watch Offline

Netflix has introduced a new offline viewing feature that allows you to download movies and shows to your mobile device so you can watch them even when you don’t have Internet access. The feature is not available for all devices however, and comes with a few restrictions. Here’s how you can download Netflix shows and movies, and everything else you need to know about the new Netflix video download feature.

Netflix download feature doesn’t cover the whole catalogue
The option to download Netflix shows and movies doesn’t let you take everything offline. Apart from original shows, only select TV shows and movies fall under the Netflix download feature’s ambit. Since some movies and shows that are not Originals are covered by this feature, it will probably be extended to more titles over time. 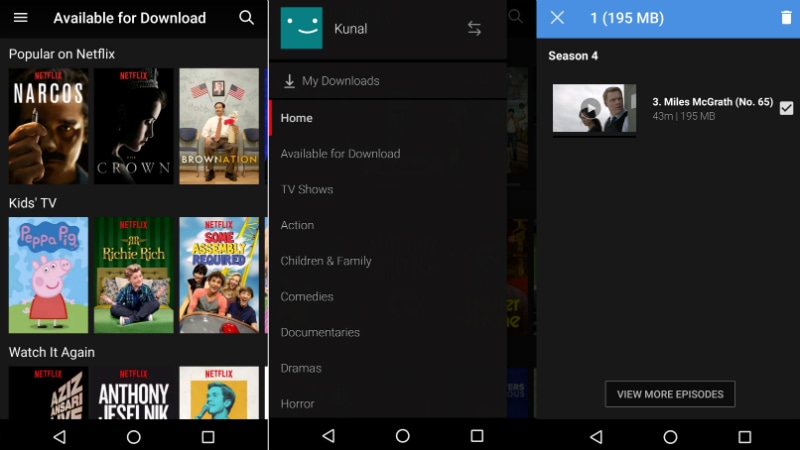 You can have too many Netflix video downloads
While downloading Netflix videos, you may sometime get the message saying 'You have too many downloads." On its support page, Netflix says this issue happens when "you have exceeded the maximum number of simultaneous downloaded titles from the same license agreement. Our content is typically licensed in bundles of titles from individual studios and distributors. In some cases, there may be limits to the number of titles from the same agreement that you can download at the same time. We will only enforce these limits in cases where our licensing agreements require us to do so."

You can delete some of the downloaded Netflix videos you have already watched in order to take more videos offline.

You can’t share downloaded Netflix videos with friends
The videos taken offline via the Netflix download feature cannot be shared with others, even if they use the service as well. The files do not appear in the file system on your phone, or when it connected to a desktop.

The downloaded videos work only in Netflix app
The movies and TV shows you took offline can be viewed only on the Netflix app, and do not appear in the default video player of the device, or third-party apps.