Last week, Xiaomi surprised fans in India by finally launching the Mi TV in India - specifically, the 55-inch Mi TV 4, with a 4K HDR display, priced at Rs. 39,999. It's a good-looking television that's just 4.9mm thick for most of its body, and it features Xiaomi's PatchWall interface, that's been redesigned from the ground up for India. Our detailed review of the Xiaomi Mi TV 4 will be coming soon, but when we heard that the interface rejig was done with the help of Bengaluru-based Sensara, whose upcoming Sensy Fusion Box we had written about in June last year, we knew we had to see more about how the interface works.

We went down to the Xiaomi office in Bengaluru, where we met Bharath Mohan, the CEO of Sensara, along with Sudeep Sahu, the Xiaomi India product manager who is overseeing the TV project. All the lab spaces in the office are built for phones, and so the recreation area has been turned into a TV lab, and there are multiple TVs from other brands, and set top boxes. It's a scene that's actually a little reminiscent of the Sensara office as well, as testing has to be carried out across multiple devices.

Xiaomi and Sensara have actually been working together for three years now, since Sensara has been providing its IR and DTH expertise to Xiaomi for its Mi Remote functionality, which uses phone-based IR-blasters. For phones that don't have an IR blaster, Sensara's Sensy remote takes commands from the phone via Bluetooth, and converts that into IR, and a similar technology is at work with the newly launched Mi TV's Mi IR cable.

"We've worked together for the last three years, and in the last six months, we really got down to work on the Mi TV," says Sahu. "One of the questions we went back and forth on a lot was whether we should do the TV or bring a Mi Box. We could sell a million units of the box maybe, but it wouldn't have as much of an impact, and build a brand."

That's where Sensara entered the picture. Its Sensy remote is already on the market, and the Sensara Fusion would bring that experience off the phone, and onto the big screen. In India, cord-cutting is still rare, and OTT services like Netflix, Amazon Prime Video, and Hotstar are all still in their early days with most of these having relatively small paying subscriber counts, compared to the 66.99 million paid DTH subscribers in the country.

"In India, the linear television market is still a huge opportunity, unlike in other parts of the world, and we wanted to address that experience," says Sensara's Mohan. The Mi TV works a lot like the Sensy app - you see recommendations that are personalised for your interests, channels with nice visual cards, content cards and there's a search function that lets you do something like look for HD English movies, or just look for cricket to find all the different channels you can turn to. But the two teams worked closely together to bring in some more features as well. "Much of the time, I was just working from their [Sensara's] office," quips Xiaomi's Sahu.

"When you look at the interface, you'll see things like period dramas, because right now Padmavat is still a big thing so that's not available yet, but people might be interested in things like Jodha Akbar," he continues. "Or, it was Hritik Roshan's birthday recently, so someone put together a list of his movies."

The PatchWall UI is laid out in tiles of different sizes, and Sahu says that the idea is that it should resemble a magazine, instead of just being uniform. That's an idea taken from the original Chinese PatchWall, but Sahu's team took it a little too literally at first, he tells us. "The first piece of feedback we got was that the font we took was horrible, because we were using Times, which is used a lot in print, and it didn't look as good on the TV view."

Trying out the remote, we were impressed by how smooth and quick every action was, and how changing channels and opening content was consistently snappy. However, we were a little surprised that the Mi TV used a wired IR blaster, rather than having a solution built into the Mi TV 4, or going with a wireless unit like the Sensy remote.

"The problem with putting it in the TV is that you might not get the right line of sight [from the IR blaster] to the DTH set top box," explains Mohan. "Like some people keep their set top box behind the TV, some have trays and keep it out of the way like that, so we had to make it easily adaptable. As to wireless - some people had given us negative feedback about Bluetooth, and Xiaomi also wanted to go with wired, so we came up with this."

Mohan shows us a prototype Mi IR cable - it looks a lot like the final version, but the wire is thin and flimsy, and the overall design lacks the polish of the final product. "I was really impressed by how fast they [Xiaomi] worked on this, we went from the first concept to the final production in under four months," he tells us. This wasn't the only hardware that was being tweaked for India though. "The sound setup was almost completely overhauled, and the brightness and colour settings have all been tweaked because people like the display to be much more vibrant in India than they do in China," explains Xiaomi's Sahu. "So we had to do a lot of tweaking to make it suitable for India. We added resistors so that it's safe even if there's voltage fluctuation, which also happens a lot more here."

The bulk of the work though, was on PatchWall, and while thanks to Sensara, the DTH part of the equation was pretty elegantly solved, the company also had to work with other OTT providers to bring them onto the platform. So far, the biggest names - Hotstar, Amazon Prime Video, and Netflix are not on the Mi TV 4, though Sahu says Xiaomi is talking to everyone, and not to rule out any additional entries. For now, if you're subscribing to one of those, you'll still need your Fire TV Stick or Apple TV or something along those lines. But other services such as Voot, Hungama, Alt Balaji, Sun NXT and more are already available, and show up in the universal search results. Other apps can be side-loaded - Sahu shows us a cool feature where you can download apps to your phone, and then automatically side-load them on the TV using the Mi Remote app.

The driving idea is that you - the viewer - are interested in content, and not where it's coming from. Instead of locking that into silos, with PatchWall, you can easily move from one piece of content to the next, which will be played from whichever provider has it. "So we don't do the delivery - it's your media player, your CDN, your DRM," says Sahu. He adds that the work for Mi TV started with going to these content companies, and getting them to understand PatchWall. "Apart from Hotstar, most of the Indian content players had good mobile experiences but not for TV, so for many of them, PatchWall is a great option," adds Sensara's Mohan. 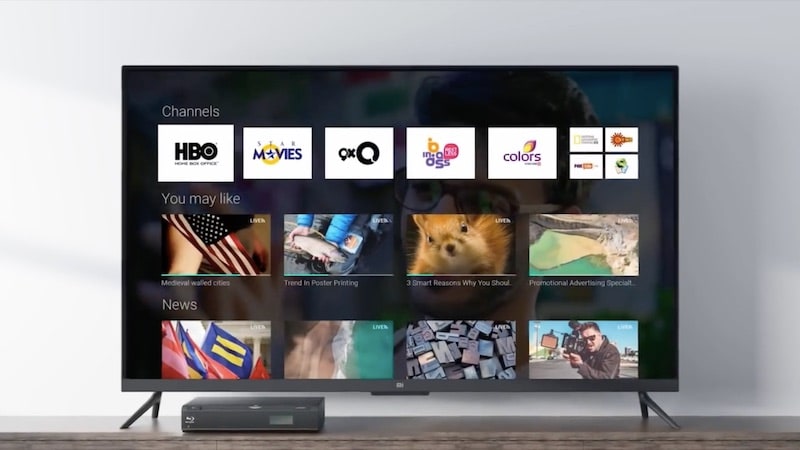 According to him, there's a big need for something simple that comes in a single box, because many of the stakeholders in television end up outsourcing the fine details when working on projects like smart TV and smart set top boxes. "We're still making the Sensy Fusion as well," he adds, "and we've been talking to other TV and DTH companies as well, because fundamentally we are B2B2C. Working with Xiaomi has been great for us though, because they have a good reputation and it's made starting our pitch simpler."

We were curious about how Xiaomi and Sensara were able to collect feedback on the Mi TV's Indian interface and still keep things under wraps though. "We did a lot of testing internally, and placed televisions in our team members houses," says Xiaomi's Sahu. "So the families of these Xiaomi employees gave us a lot of feedback, and some of them have told us that they can't go back to a regular TV anymore, which was very encouraging."

At this point though, the work has just started for both companies. Xiaomi aims to deliver an update every month - although this is something that might need fine tuning, since most people are not used to having to update their TVs at all, leave alone that frequently. Still, regular updates will lead to new features. "By the time we are selling the TVs, we will already have some updates waiting, so we'll have to see how people respond," says Sahu. A lot of work is also happening on the remote, adding new functionality, and features like profiles. Right now, Sensy on the Mi TV suggests shows on the air based on what people have been watching, but once you can have profiles, these can be tailored to each person in the house.

There are a number of smart 4K TVs of this size, at this price point - though not many with HDR - but Xiaomi is hoping that this kind of long term roadmap, where it can continue to improve on the television experience, is going to help it stand out from the competition. Although we'll have more to say about the television itself in our review, a lot of what its doing in terms of the experience itself seem to be headed in the right direction.