Having raised $15 million (roughly Rs. 100 crore), hardware startup Caavo recently announced the launch of its Caavo set-top box, which aims to bring together different streaming boxes and TV services under a single umbrella. The concept is a little confusing at first, since the Caavo box itself is not a media player - it's a set-top box for your set-top boxes, where you'll plug in your cable/ DTH set-top box, Apple TV, Amazon Fire TV, and even your Xbox One.

Since the announcement on February 14, the Caavo has been the subject of much speculation - it's a gorgeous wood panelled device that blends beauty and brains to solve a problem that we all face, though not so many of us actually think about. Instead of having to remember which device holds which apps, and which apps hold what content, you just need to know what you want to watch, and leave it to Caavo to work out all the details. The catch is that the device itself is pretty expensive - Caavo will cost $400, or around Rs. 27,000 - and it's a problem that, while annoying, probably isn't worth that much money to most people.

Caavo's founding team consists of Andrew Einaudi, Ashish Aggarwal, Vinod Gopinath, and the late Blake Krikorian. These founders bring together experience from Sling Media, Microsoft Xbox, Jawbone, and Shufflr. And as it turns out, the engineering team, and the entire design of the Caavo all happened right here in India, where Gopinath is based, though the actual production is happening in Korea. Gadgets 360 went to Gopinath's office in Bengaluru to take a look at the Caavo, and get an understanding of how the device will work, and the new category that it's trying to create.

In Gopinath's office, there's a Caavo set up with wires flowing out in all directions. "I've been trying different things, and that's why it's looking so messy," he explains, as we walk into his office and sit down to talk about the device. This particular unit is getting some updates though, and so another one is being set up by the team as we speak.

The Caavo founders had all been looking at different problems, from different angles, for some time now, but through a series of meetings and introductions, got to know each other and thought of how they could work together to make television better. "The problems weren't exactly unique, but there hadn't been a good solution to these things for a long time," says Gopinath. "People had hoped that there would be some kind of god-box that would bring everything together in one place, but that's not happened yet."

One box to rule them all
Amazon doesn't make a Prime Video app for Google and Apple's TV platforms - while Netflix isn't accessible through the Apple’s new TV app on the Apple TV. The devices are all fragmented, and that doesn't even take into account game consoles, third-party set-top boxes such as the Roku, and cable set-top boxes. 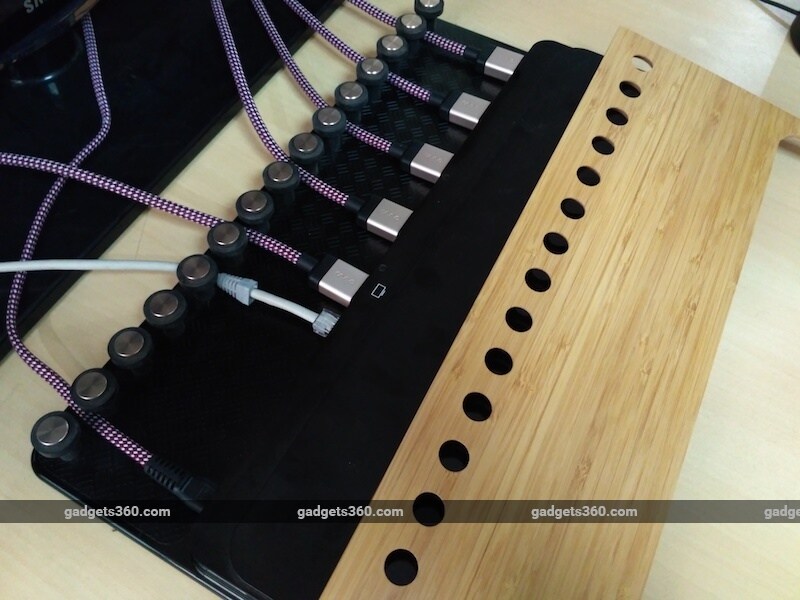 "We wanted to make something very simple, where people would just use one remote and watch what they wanted, without having to think about which device it was streaming from, or what service they're using," explains Gopinath.

The four men got together and started the company quietly, iterating and building for well over a year. The result was Caavo - a neutral platform that all the different boxes can plug into. It lets you launch your favourite apps on your favourite devices, and most important, watch your favourite content, without any complication. The video is still being played by your Apple TV, or your Fire TV, or through your Chromecast. But instead of being plugged into your TV, they're all plugged into the Caavo, and only a single cable goes in to your TV.

"Big deal," you might be thinking. "An HDMI-hub and a universal remote for $400? No thanks." But that's where you're missing out on the whole point of the Caavo. It's not just a Logitech Harmony, although that is a part of what it does, definitely. The device's real strength lies in the fact that it can also make sense of your content, regardless of the service it's in, or the device the relevant app is on.

Caavo is neutral to all devices
"What we do is, when you set it up, you enter your credentials for the different services you use," Gopinath explains, "which is only kept on the device, we don't upload it to our systems. So now, we can go to your Netflix and Prime Video accounts, and figure out what shows or movies you've been watching, and use that to populate your watchlist."

"Then, if you want to pick up where you left off, you can just ask Caavo to play," he explains, "and it will start playing from the place you left off, or the next episode if you finished the last one, using the same service. On the other hand, if you ask it to play something that you haven't watched before, we'll show you all the services it's available on, and then you can choose which one to play."

Gopinath demonstrated this to us, using an Amazon Echo - telling it to play Stranger Things. Immediately, the Netflix app launches on the Apple TV, and the show starts playing. Tap the Home button on the Caavo remote, and you're taken to the Apple TV homescreen. There, you can swipe through the interface and launch other apps if you choose - want to watch news headlines or YouTube videos then you can go right ahead while using Caavo's remote, and Apple TV's own interface. "This was actually quite a challenge, because all the different devices 'talk' to the TV differently," says Gopinath. "So we had to come up with different solutions for how to communicate with them, as some used HDMI, others are IP, there's a lot of things going on there."

The Caavo's own interface is extremely minimal - tap the Caavo button on the remote, and a narrow transparent pane emerges from the bottom, with four options - Search, Watchlist, Apps, and Settings. Tap the button a second time and the pane recedes again. The rest of the interface is really the interface of whatever device you've used last. 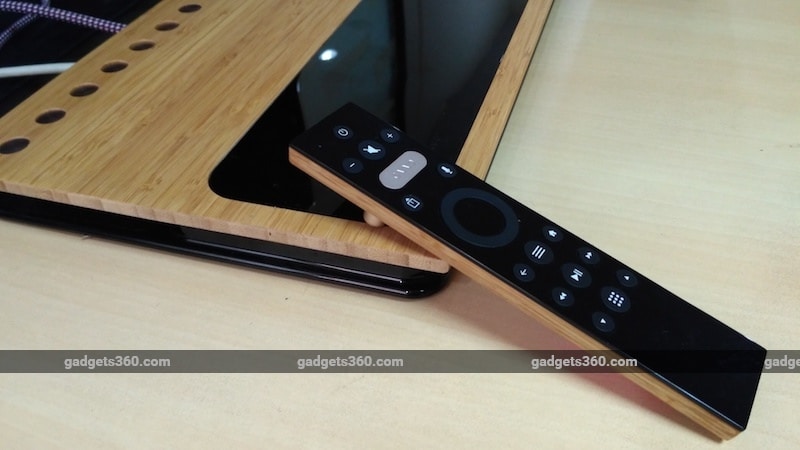 This isn't a coincidence. "Around CES we started showing the Caavo to Netflix, Amazon, and the others," explains Gopinath. "We wanted to see what they thought, whether they would be on board with this, and so far we've had no problems, but I think they're also trying to figure out if we're a good thing or a bad thing.”

The fact is though, that Caavo uses a lot of hidden technology to talk to all the different boxes, since there are no ‘official’ ways of achieving what it’s try to do. Gopinath says the company is using machine vision and machine learning to detect what's on the screen, so that it can be sure that the attached devices are actually showing the correct videos, and other stuff like navigating the Apple TV.

Gopinath downplays all this, though. Like a magician, he pulls back the veil a little to give us a peek at how things work, but he doesn't give everything away, so that some mystery remains.

"There's a lot of work we had to do on a lot of different fronts," he says. "Like, I can't show you the setup right now, but that's one area, and we did some very interesting things with the HDMI as well, which I can't talk about."

Not for everyone
He's more keen to show off the hardware itself, and with good reason. The wood panelled device is gorgeous. There's a glossy black panel that looks appropriately futuristic, and if you lift up the wood, you can see the channels through which the HDMI cables are connected. The remote is sleek, and comes in matching wood tones. All in all, there's a lot to like about the Caavo, though we're still around six months away from the planned shipping date right now.

Gopinath tells us that the hardware is being iterated on pretty rapidly even now, and changes are coming in the months ahead of us as well. There are small tweaks and big ones, some unannounced features that Gopinath demos with a happy grin that might end up being dropped along the way, and plenty of things on the wishlist.

But for now, the company wants to hear what people have to say about the product. Its first run is going to be a limited order - 5,000 units at $400, and pre-orders begin June, only in the US. If that works out, Gopinath says, the company will consider launching Caavo in Western Europe.

"We didn't want to start off too big, and then have to fix one thing and then another," says Gopinath. "We're going to do this the right way, so we're starting small, with a manageable number of units that we will be able to sell, and we'll build on that, and the goal in the long run is to make a consumer version that will be affordable for most people."

"It will have compromises," he adds, "but right now we have to work out what that means." Premium materials and sleek design will probably make way for more boxy designs and plastics, but Gopinath says Caavo's focus right now is getting the first generation device in the hands of users.

Even so, many users will not even require a device like this one. It's suited for cord cutters who use multiple services across devices, but if you're just using your set-top box and a television, or maybe one additional box like an Apple TV (for example), then Caavo doesn't really add anything to the equation. In the US market though, Caavo can integrate with your cable television, along with your set-top box, and probably your game console, at which point it could become a pretty handy device to simplify all the clutter.

With its price and intended purpose it’s no surprise that despite the fact it’s being developed in the country, India isn’t really a focus market for Caavo. The company aims to establish its brand first, and then build down to a mass product. The real challenge is going to be explaining the benefits of the device to people. But given how fragmented the television market is getting, that might not be so hard, as anyone who has spent a Sunday morning flicking through HDMI ports while trying to remember just which set-top box and service had the movie they wanted.

Further reading: Caavo, Set top box, Smart Tv, Apple TV, Amazon fire TV, Chromecast
Gopal Sathe Email Gopal Gopal Sathe is the Editor of Gadgets 360. He has covered technology for 15 years. He has written about data use and privacy, and its use in politics. He has also written extensively about the latest devices, video games, and startups in India. Write to gopal@ndtv.com or get in touch on Twitter through his handle @gopalsathe with tips. More
Reliance Jio's Clean Chit From TRAI Will Be Challenged, Says Vodafone
Huawei Staff Fear Cuts as Smartphone Profits Disappoint

Meet Caavo, the Designed in India Set-Top Box That Wants to Rule Them All
Comment