Jurassic World: ILM on the Visual Effects Challenge With the Chris Pratt-Starrer

If there's one visual effects company that has become synonymous with cinema history and innovating with new technologies, it's Industrial Light & Magic. Founded by George Lucas in 1975 to work on Star Wars, the studio has been behind some of the most iconic films since then. This includes the Jurassic Park franchise, which received its fourth instalment last year in Jurassic World. Incidentally, the film is also fourth in all-time biggest earners having raked in over $1.6 billion (approximately Rs. 10,700 crore) worldwide.

While some felt that Jurassic World fell short on its storytelling and narrative inventiveness, there were no such concerns on the visual spectacle it presented. With production on Jurassic World 2 about to begin, we spoke with ILM animation supervisor Glen McIntosh regarding his experience working on the first film, and why the final battle scene between Indominus rex and T. rex was a rewarding yet daunting experience.

"The final battle was daunting, just because of what Colin [Trevorrow, the director] wanted," McIntosh says, adding later: "It took that long because Colin wanted to conceive it as one long shot." That meant having to stitch it together in pieces, and so the ILM team of animators had to work simultaneously on the shot instead of one animator working on his own. Where a typical scene takes a few weeks at best, the final shot - involving Indominus, T. rex and raptors - took months.

And that's not counting the planning process, which began two years before the footage got to the animators' desks. Part of that was down to the shot length, complex choreography, dynamic action and camerawork, he adds, and then there was the collaboration that went in. "Colin was offering lots of ideas, Steven Spielberg would offer ideas, and so we had to be able to react and give them what they wanted – so that was constantly a back and forth between Colin as the director and us as the artists," McIntosh notes. 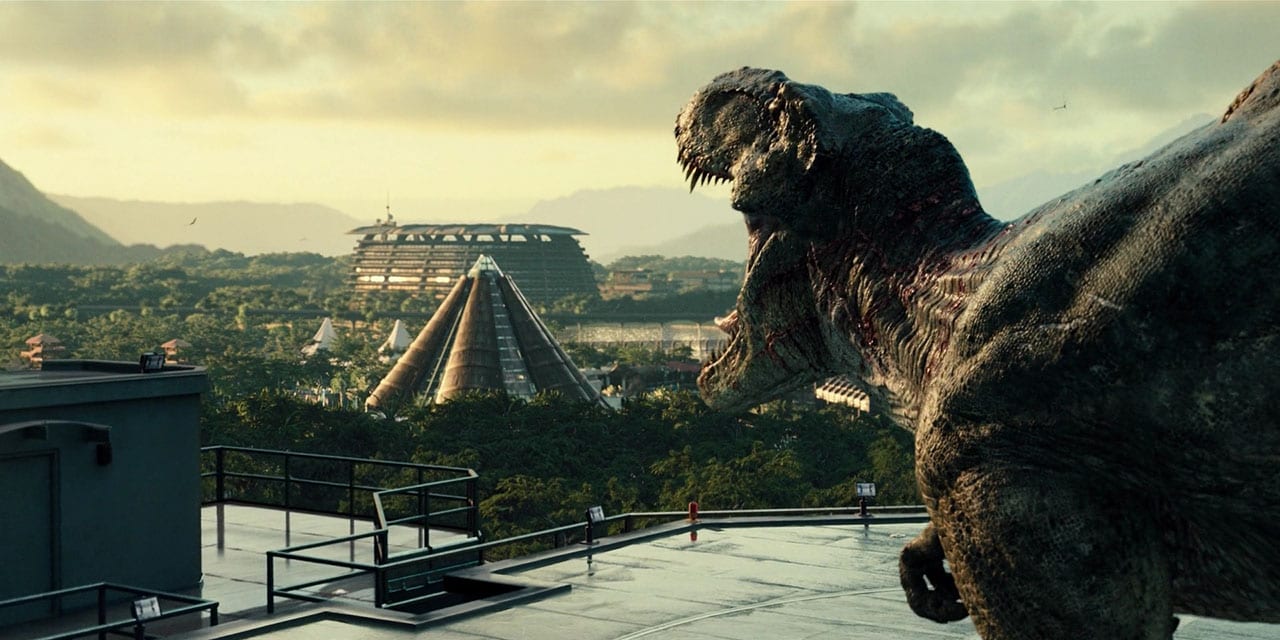 "That shot was even unusual for Industrial Light & Magic even though we are used to animating big, effects films like Star Wars: The Force Awakens, and the original Jurassic Park films," McIntosh says. He would know, having worked earlier on 2001's Jurassic Park III. To help their work, McIntosh's ILM colleague Tim Alexander - who served as visual effects supervisor on Jurassic World - helped develop an app called CineView, which would allow them to visualise the scene for audiences right on set.

This, McIntosh says, was a unique approach. Typically, films require the visual effects teams to work on this aspect after the fact. "And we wanted to always give the impression that there was a cameraman trying to film, [like] how a National Geographic cameraman would film a fight between two lions or a fight between two elephants," he adds. The choreography of the fights is only one aspect of McIntosh's work as animation supervisor. His overall task to create the performance and movement of the dinosaurs, whom he prefers to label as animals not monsters - in keeping with the spirit of the first film - and talks about as if they were living beings.

For a project McIntosh spent two and a half years on - much longer than typical - he wanted to do something new and impressive. "With animation, there was never a question that my animation team was going to be able to create incredible performances," he says. "But that has been done on the previous Jurassic Park films. So Colin, Tim and [I] were continuously looking for ways to up the ante, and what the dinosaurs could do as far creating a real performance, so we went with motion capture which gives you a foundation for complex movement the animators can then build upon."

McIntosh is talking about the pack of four velociraptors, whom Navy vet Owen Grady (Chris Pratt) tries to train in Jurassic World. Instead of designing their performance completely in post-production, McIntosh and his team brought in four actors and had them act out the requisite movements, all with a grey suit along with a tail. Having real people meant "the fidelity of that performance is so minute you can see jiggle in the legs [of velociraptors] for impact tremors," he adds.

Even as ILM looked towards new ways of doing things (motion capture) or new technologies that weren't around before (subsurface scattering), McIntosh says they also benefited from being able to count on some of the old guard. That included the likes of ILM creative director Dennis Muren, and dinosaur movement expert Phil Tippett, both of whom picked up an Oscar in 1993 for best visual effects.

For McIntosh, working with the two of them on Jurassic World was special because they had been childhood heroes of his - a period to which he also attributes his fascination for the prehistoric creatures. McIntosh grew up in the city of Calgary in Alberta, Canada, which is quite close to the Badlands of Montana, USA - a place that served as home for Tyrannosaurus more than 70 million years ago.

All that's left now are the fossils, but the work of McIntosh and his team at Industrial Light & Magic means that millions of dinosaur lovers like him can see and appreciate the animals in all their glory. Minus the feathers, unfortunately.

Jurassic World will air on Wednesday, October 26 at 6pm on Sony PIX. A sequel, as yet untitled and directed by J A Bayona, will arrive in theatres June 22, 2018.

Jurassic World: ILM on the Visual Effects Challenge With the Chris Pratt-Starrer
Comment