Can Star Wars: Episode VII - The Force Awakens Become the Biggest Movie Ever? 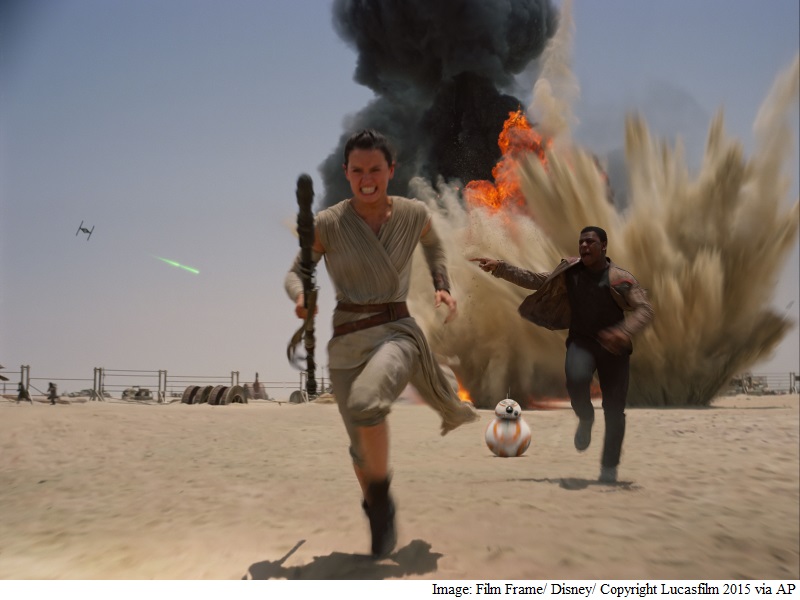 Riding galaxy-sized expectations, the new "Star Wars" movie is already setting records for pre-opening ticket sales, with still a month to go. But does that mean the movie's destined to be the biggest of all time?

Though several signs point in that direction, the outcome isn't guaranteed.

The movie is on track to have the biggest December opening ever, topping "The Hobbit: An Unexpected Journey," which took in $85 million (roughly Rs. 561 crores) in the US and Canada on its opening weekend in December 2012.

Ticket seller Fandango says advance ticket sales for "Star Wars: Episode VII - The Force Awakens" has already topped every other movie, though it didn't provide figures. Imax says it has sold $18 million domestically, double the previous record. Imax receipts account for a third of pre-release sales for this movie, putting the domestic total at more than $50 million (roughly Rs. 330 crores).

Whether it bests the biggest grosser of all time - "Avatar," with $2.8 billion (roughly Rs. 18,510 crores) worldwide - depends on word of mouth and whether fans love it enough to watch it multiple times through the new year.

"Star Wars" will have the advantage of having weak competition for months. Marvel's "Deadpool" doesn't come out until mid-February, while Warner Bros.' "Batman v Superman: Dawn of Justice" isn't out until late March.

"I think it's going to own January," said Erik Davis, managing editor of Fandango, one of the nation's largest online ticket retailers. "I know one guy who has nine tickets to see it in the first week alone. That's what we're talking about."

A single ticket in big cities can cost $25 or more after paying for extras like Imax and 3D.

Social media activity is also off the charts, according to entertainment news website Moviepilot Inc.

Exactly a month from release, "The Force Awakens" had 405 million trailer and teaser views on Facebook and YouTube. That's 87 percent more than this summer's "Jurassic World," which opened domestically with a record $208.8 million in ticket sales and owns the all-time No. 3 spot with $1.7 billion (roughly Rs. 11,238 crores) worldwide. No. 2 is "Titanic," at $2.1 billion (roughly Rs. 13,882 crores).

To be sure, December releases tend to be smaller than in the summer, so coming out on top may take a marathon rather than a sprint.

As for the all-time high, one thing "Avatar" had going for it: It rode a wave of consumer interest in 3D, which costs a few dollars more than regular tickets. That frenzy has largely cooled off. Traditionalists with a nostalgia for the originals might prefer 2D screenings, especially with director J.J. Abrams' use of more realistic-looking special effects like puppetry.

Advance sales don't always equate to record grosses. The first installment of "The Hunger Games" was the leader in advance sales, but topped out at a worldwide gross of $693 million (roughly Rs. 4,581 crores), not even in the all-time Top 10.

What "The Force Awakens" benefits from, however, is interest that now spans multiple generations. The movie also has a much bigger Chinese box office to tap. "Avatar" pulled down a monstrous $204 million (roughly Rs. 1,348 crores) in China through 2010, but the theatrical market there is now at least three times as big.

The big unknown is that no one's actually seen the movie yet.

It could make the difference between the so-so reaction to the "Star Wars" prequels in Episodes 1 to 3 - with heavily parodied characters like Jar Jar Binks and video-game-like action scenes - and the satisfying revival that fans are hoping for.

"The brand name alone and the excitement for the franchise will get huge numbers in the door," Rentrak senior media analyst Paul Dergarabedian said. "But for very long-term prospects, you have to have a movie that delivers."

Must Read: How a 1985 'Computerbabble' Defined Tech Terms Everyone Knows Today
China Reportedly Mulling Its Own 'Secure' Smartphones