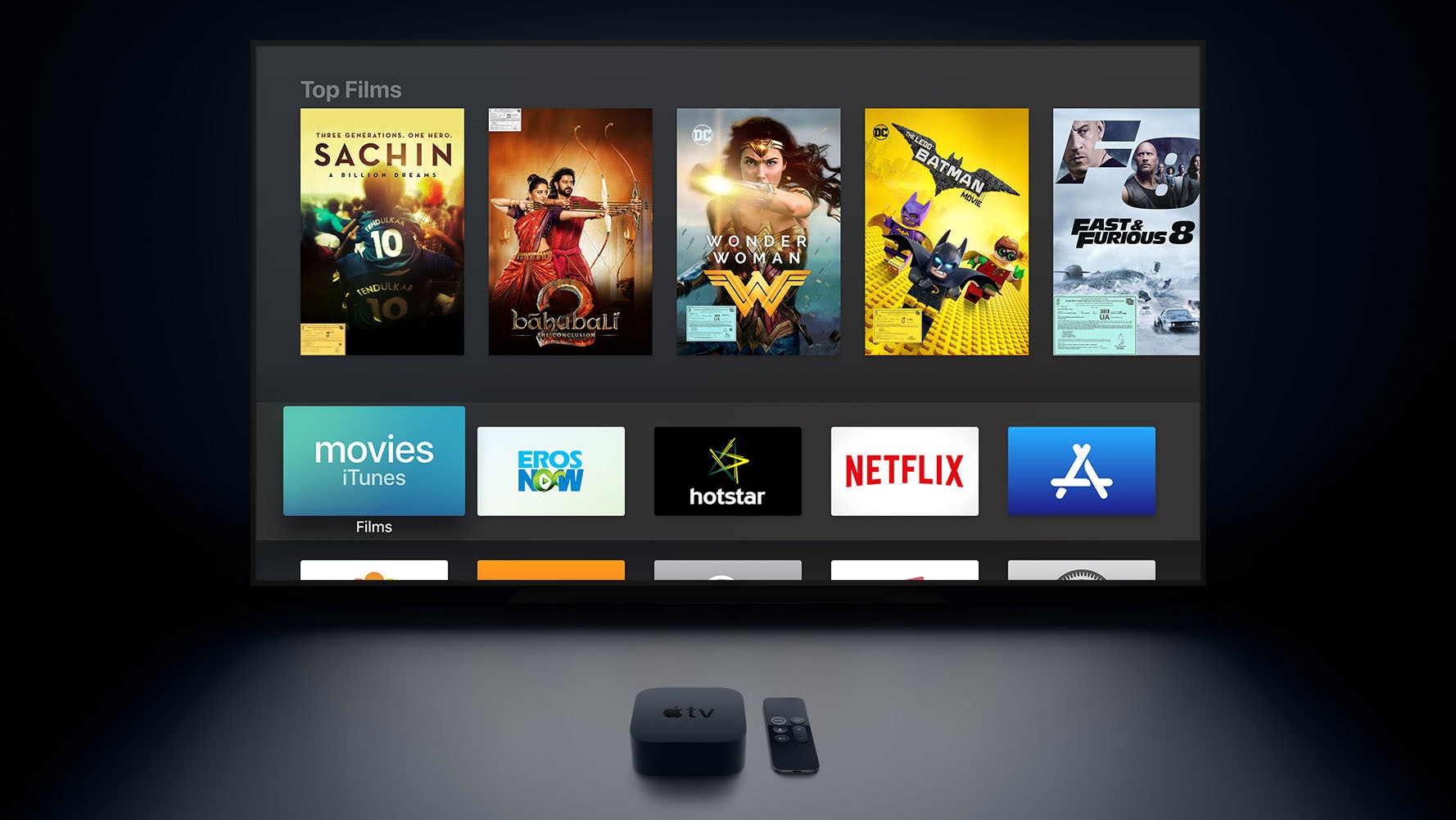 At the Steve Jobs Theater inside Apple's new campus on Tuesday, sandwiched between the announcement of the three new iPhone models – the iPhone 8, iPhone 8 Plus, and the iPhone X – and the new Apple Watch Series 3 was the Apple TV 4K, a big step up for its living room offering. Just like the name reads, it's now capable of playing back 4K media, be it movies from iTunes, or Netflix's growing catalogue of 4K originals. What's more, Apple confirmed that it will be coming to India.

But Apple is a late entrant to the 4K streaming player space, and there's a lot on competition from multiple fronts. The chief ones are the Amazon Fire TV, Google's Chromecast Ultra, the Nvidia Shield TV, and the Roku Ultra. All of these have been 4K-capable for the last two years or so, and each of those, including Apple's TV 4K, have something to offer that the others don't.

With that in mind, let's dive into the differences between the five big 4K players, in a bid to see which one will suit your home theatre experience best.

Availability
For those of us who live in India, this is actually the biggest factor. Of the five in consideration, only the Apple TV 4K has been officially announced for India, with Apple saying it will arrive "soon after" its September 21 release in the US and 21 other regions.

Amazon's Fire TV, meanwhile, is available in only a handful of countries: the US, the UK, Germany, Austria, and Japan. Amazon doesn't let you ship it across borders, so you'll have to ask someone traveling from one of these countries to get one if you want it. In India, only the Fire TV Stick is available, which does not support 4K content.

The Chromecast Ultra has slightly wider regional availability as it covers Australia, Canada, Denmark, Finland, France, Germany, Ireland, Italy, Japan, Netherlands, New Zealand, Norway, Spain, Sweden, the UK, and the US. Again, in India, you need to make do with the ‘regular’ Chromecast.

That leaves the Roku Ultra, which is available in Canada, France, Ireland, Mexico, the UK, and the US.

It's worth pointing out that Nvidia bundles a Shield controller with the Shield TV, which otherwise retails at $59.99 (about Rs. 3,800).

Apps
A streaming player is no good if you can't watch your favourite content on it. The apps that matter to viewers vary widely by region, so we'll be focusing on the ones that work in India.

Google's Chromecast Ultra has the widest support of all, as any app that supports the cast ability will work with the 4K Chromecast. That includes Netflix, YouTube, Hotstar, Google Play, Eros Now, Hooq, Saavn, Ditto TV, and Wynk Music among others. The big exception here is Amazon Prime Video, which, along with Netflix, supports 4K streaming.

Coming to Amazon's Fire TV, you can download and use any app that supports the Fire TV Stick, which is officially available in India. That includes Netflix, Hotstar, Eros Now, Sony Liv, and Voot, among others. Amazon's own Prime Video is a big plus too, though Google Play is missing.

The Roku Ultra isn't designed for India, so your app selection is limited to the services that are available internationally: Netflix, Amazon Video, and Google Play. Things are slightly easier with the Nvidia Shield TV, since it runs Android TV, giving it access to all apps that have built Android TV-specific versions.

Hotstar is working on a Roku and Android TV app post its launch in the US and Canada, so it's only a matter of time before you can get its extensive catalogue too on both Roku Ultra and Nvidia Shield TV.

The Apple TV 4K has exclusivity on its own content: iTunes and Apple Music. Beyond that, you can watch content from any third-party apps that have dedicated Apple TV apps: Netflix, Hotstar, Eros Now, Sony Liv, and ALTBalaji. Amazon Prime Video is coming later in the year.

Gaming
Though games are available on each front – Chromecast turns your phone into a controller, and Apple, Amazon, and Roku rely on their tiny remotes – the best choice for gaming is undoubtedly the Nvidia Shield TV. There's a reason it ships with a dedicated controller, after all.

With the Shield TV, you've a total of three ways to play: Android games that have been made for TV, Nvidia's subscription-based GeForce Now offering, or using your Nvidia GeForce graphics card to stream your PC games to the Shield.

Thanks to Nvidia's GameStream technology, you can get most PC games and your Steam experience in the living room, which turns your computer into a powerful console of sorts.

Plus, the new Shield controller is a much improved version of the disappointing original, and it also doubles as a neat remote for the Shield TV interface, with a dedicated voice button, and a touch area for controlling volume and play/ pause.

Remote control
Of the five, the Chromecast Ultra is the only one that doesn't ship with a remote. Instead, Google wants you to rely on your Android or iOS device, using it to control what the Chromecast does.

The Apple TV 4K remote is the same as the one with the old Apple TV. There is a touch area at the top to navigate, and buttons for menu, home/ TV app, Siri, play/ pause, and volume controls. There's no headphone jack, so you'll need to get Bluetooth headphones, if you want wireless audio for your ears.

The remote for Shield TV has the least buttons for any, with a navigation circle up top, with a back, home, and voice button to bring up Google Assistant. A touch area in the bottom lets you play/ pause, and control the volume. For private listening, you'll need to fall back on the Shield controller, which has a headphone jack and also supports Assistant hands-free.

The Fire TV doesn't have a headphone jack, but you can pair any Bluetooth headphones with the device. With the Roku Ultra, the private listening feature is in-built into the remote that ships to everyone. Both of them have tons of buttons for the usual things, and the Roku also has dedicated buttons for a few services including Netflix. They also have voice search across providers.

Ports
It's all well and good that you can watch 4K movies and TV shows, but if it doesn't work with your home theatre set-up, it's all for nothing. The Chromecast Ultra and the Apple TV 4K are the simplest of the lot, with an Ethernet port for those who need it. That's also available on the rest.

But the Roku Ultra is the only one with an optical audio out. That will be useful for those that have a dedicated audio system, and an older TV that doesn't support passthrough.

With newer TVs, you can simply plug in an HDMI cable between your player of choice and the TV, and then use the TV's outputs to send audio to the speakers.

HDR
Out of the five, only one – Amazon Fire TV – doesn’t have support for HDR (high dynamic range) displays, though the standards supported vary from device to device. Both Apple TV 4K and the Chromecast Ultra support the proprietary Dolby Vision and open HDR10 standards, while the Nvidia Shield and the Roku Ultra currently support HDR10 only.

Amazon is expected to announce two new devices in its Fire TV line-up this year, both of which have been tipped to bring HDR support. Since Amazon Video is available in both Dolby Vision and HDR10, you can expect them to support both standards.

Live TV
Here's the thing: over-the-air live TV won't work in India with any of the five streaming players, though you can use apps such as Hotstar and Sony Liv among others. But in other countries, you can also use them – except Chromecast Ultra – to watch live sports via channels, or use them as DVRs.

At its event, Apple said that the TV app will be updated for live sports later this year. All of Amazon, Roku, and Nvidia currently support live TV via their app offerings.

As for DVR functionality, the best way to go about it is Plex. The app is available on all platforms, and it brought live TV and DVR functionality for Plex Pass users earlier this year. Of course, you'll need a compatible TV tuner and Plex Media Server.

That's where the Shield TV comes in as the best option, which is the only one of the five that has enough firepower to run Plex Media Server by itself.

Are you trying to decide on a 4K streaming player? Leave your questions in the comments below, and we'll do our best to answer them.