Apple Executive Seeks a Touch of Chic at Retail Stores 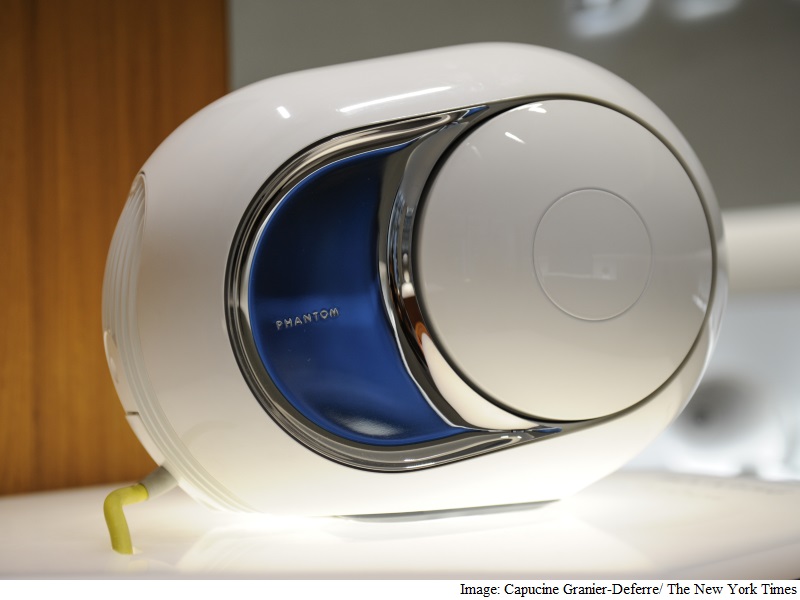 Angela Ahrendts, Apple's senior vice president of retail, got a private demonstration of the fancy wireless speaker, the Phantom, and its sound quality seven weeks ago. On the spot, she said she wanted the space podlike device, which starts at $1,990, to be sold in Apple's retail stores.

"She moved incredibly fast, from our first meeting to figuring out how the Phantom would be displayed," Quentin Sannié, the co-founder of Devialet, the French audio company that makes the white and chrome speaker, said of Ahrendts.

This week, the Phantom will appear in 14 Apple stores in the United States, and the company is discussing how widely to roll out the product next year. The device will get the sort of prominent display treatment that is typically reserved in Apple stores for the company's Beats audio accessories.

The move is an indication of how Ahrendts, who started at Apple last year, is changing the playbook at some of the iPhone maker's stores this holiday season and the direction she's going in: ultraluxe.

Apple's stores typically spotlight the company's devices, with the most expensive audio accessories topping out in the hundreds of dollars. The Phantom is the first high-end non-Apple gadget that Ahrendts, the former chief executive of the fashion house Burberry, has brought in since she took the job. It buttresses some of her other recent moves to create more of a luxury Apple retail experience, including initiating private try-on appointments for the most expensive Apple watches, reducing the numbers and types of accessories that are sold, and pushing manufacturers to make special packaging for gadgets carried in Apple's stores.

Ahrendts "is shaving off some rough edges and completing our sense that the Apple Store is a premium experience," said Jan Dawson, an analyst at Jackdaw Research.

Her role in bringing in the Phantom also gives a glimpse into how Ahrendts has been operating within the world's biggest company. Since joining Apple, the 55-year-old executive has been relatively quiet publicly. But she moved swiftly and nearly unilaterally on the Phantom, showing how she can push for the products that will shape the store experience.

The products that Apple stores carry are important because they make up the only customer experience that Apple can fully control, Dawson said. "The stores are the best physical manifestation of the brand," he said. "Angela is bringing her sensibility to that experience."

Apple declined to comment and declined to make Ahrendts available for an interview. In a public appearance last month at the Fast Company Innovation Festival, Ahrendts said she had been working toward Apple's stores becoming "sleeker and smarter," as well as unifying Apple's in-store and online shopping experiences.

Apple has traditionally sold the most expensive accessories online only, like the $2,700 B&O BeoPlay A9 MKII speaker. "I asked Tim a very simple question: Why do we do it this way?" she said of her boss, Timothy D. Cook, Apple's chief executive. Cook told her he didn't know, she said.

Ahrendts' push will have implications for Apple's growth. As of September, the company had 463 retail stores worldwide and was focused on expanding in China. The stores account for about 12 percent of Apple's annual $234 billion in sales, Dawson estimated. Store revenue rose about 39 percent over the last 12 months, according to eMarketer, with Apple stores generating $5,775 a square foot, or more than any other retailer in the world, beating out Tiffany & Co., Coach and Movado.

Ahrendts was known at Burberry for revitalizing the brand, pushing the fashion house into online retail ahead of other luxury apparel companies and forging alliances with tech companies like Apple, through which she outfitted Burberry's corporate staff with iPads. Cook hired her in 2013 to make sure that Apple's stores would evolve and expand.

At the time, morale had fallen at Apple's stores, the company's executives have said. Ron Johnson, a former Target executive who became the first head of Apple's retail stores, had departed the company in 2011. After a search, he was replaced by John Browett, who had run the British electronics retailer Dixons. Browett slashed hours and benefits for Apple Store employees.

Since coming aboard, Ahrendts has asked for Apple's 60,000 retail employees to air their grievances and send suggestions, and she sends them weekly three-minute video updates to improve communication. She has started a program so employees can move to other stores worldwide. Ahrendts has also overseen the opening of new Apple stores, including 14 in China and Hong Kong. For customers, she reduced Apple's long lines by creating an online reservation system.

By bringing the Phantom to Apple, Ahrendts is giving the technology crowd something to love as well. Phantom's parent company, Devialet, is a brand used by tech executives including Tony Fadell, the chief executive of Nest; Andy Rubin, the co-founder of Android; and Marc Benioff, chief executive of Salesforce.com, said Sannié. He said Benioff recently introduced Ahrendts to him and encouraged her to hear the Phantom.

For Devialet, moving the Phantom into Apple's stores is significant. The Paris-based company is known for making amplifiers that can cost as much as $30,000. Until the Apple deal came along, its devices were carried in only a handful of exclusive retailers, including Colette in Paris, Harrods in London and the MoMA store in New York City.

Since the initial meeting with Ahrendts, the process of getting the Phantom into Apple's stores has been smooth, Sannié said. He and his team have visited almost all of the 14 stores where the speaker will initially be sold to look at display possibilities.

"We don't have other global distribution other than the Apple store," Sannié said. "We don't want to be in another chain because millions go to the Apple store looking for excellence, the very best products. This is the best exposure we could want."