If you’re in the market for a cheap media streaming stick, you’ve got two popular options to choose from: Google Chromecast, and Amazon Fire TV Stick. Both pull off the same basic tasks – playing your movies and TV shows from a variety of sources, but their approach differs.

The Chromecast is more of a service than a standalone product. You open up a supported app on your Android or iOS device, and hit the cast option inside the app to connect to the TV. You can also mirror your device’s display, if you like, and you can also cast from your PC, so you can view your saved videos, or open up Netflix and play it on the TV if you want.

The Fire TV Stick is a device in itself. You can install hundreds of apps on its internal memory, and it even comes with its own Bluetooth remote. There’s no need for your phone to be around, just the TV and Amazon’s dongle.

Amazon’s offering makes for the more traditional living room experience, where your browse around different channels. Google's Android TV is much closer to that idea, while the Chromecast represents a whole different approach to what we think as television. As a result, Amazon's Fire TV can be easier to us, while the Chromecast is more flexible in terms of what you can do with it.

So, which one should you go for? Let’s find out.

A good UI doesn’t just lay out the options in a convenient fashion, but also lets you pick up where you left off from last night. Amazon has greatly improved its Fire OS over the years, and it looks much cleaner, and is easier to use than before. You get a ‘Recent’ tab on the home screen which shows you the most recent app you accessed, or the Prime Video title you were watching.

The Chromecast doesn’t technically have an interface, since it’s basically a conduit for the video. All the navigation and selection takes place on your device – be it a phone, tablet, or PC – and you can’t do anything on your TV screen.

With the Chromecast, to do even basic things like skipping forward in an episode, or switching to a different movie, you need to locate your phone or tablet. Most modern TVs have HDMI-CEC, so you can at least pause video from your TV remote. You can use Google Home to control the Chromecast via voice controls, but it costs a lot more than the Chromecast itself, and isn’t even officially available in India yet.

On the other hand, the Fire TV Stick ships with a Bluetooth remote, which is one of its best features. You get a control pad for navigation, buttons for playback, and even one for voice search. Amazon also has a Fire TV remote app for Android and iOS, which is useful to have since typing on a TV with a remote is always a nightmare scenario.

With the app, you can also do all of the functions the remote is capable of. But that’s really about it. Since the Chromecast relies on your device for the most part, the Google Home app lists compatible media apps, and then suggests other such apps that you don’t have. And from the app’s Devices section, you can pause playback, or stop casting. 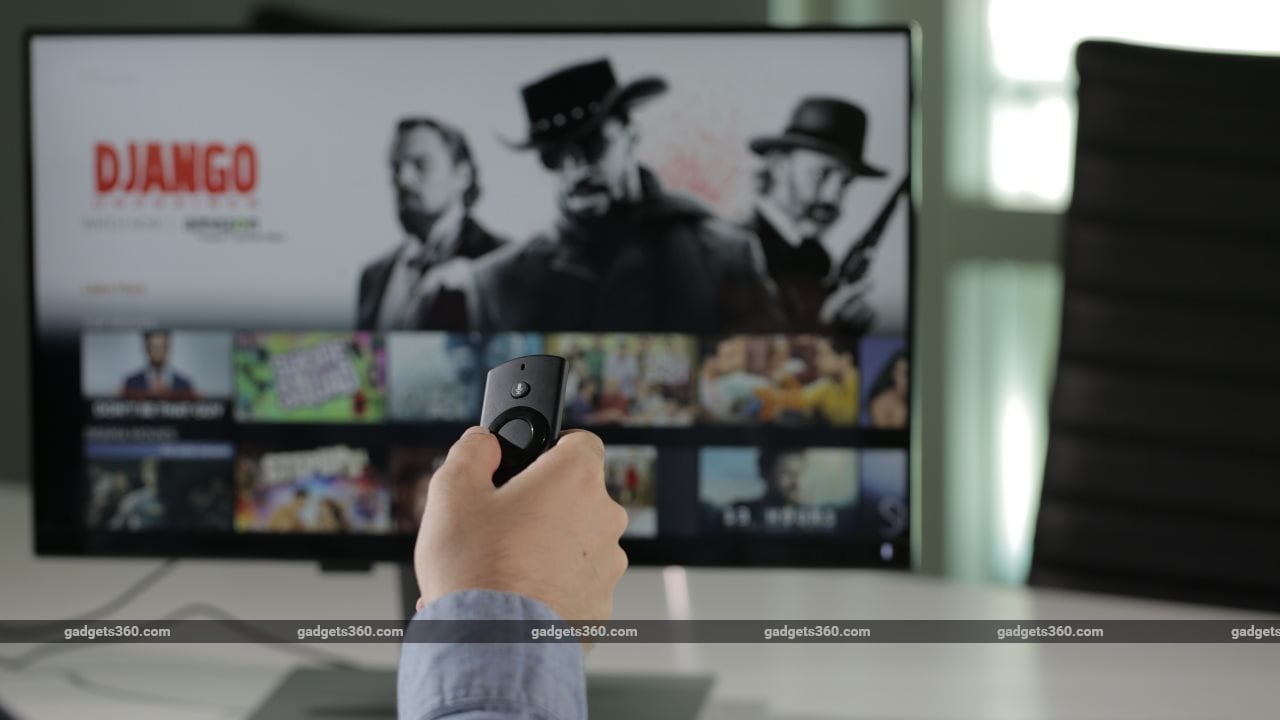 The Fire TV Stick has a dedicated search tab, where you can type in what you’re looking for. Alternatively, you can just hold down the voice button on the remote, and say your query. Sadly, Amazon’s voice assistant Alexa isn’t available in India yet, so the included remote won’t do any voice commands. And it’s also lacking universal search - you can only use it to search for any Prime Video title, say, Man in the High Castle, or an app, such as Hotstar by speaking.

Though the Chromecast has a companion Google Home app for Android and iOS, its catalogue indexing doesn’t work beyond YouTube and Netflix. Even with those, it only shows you half a dozen titles - there's no search option. It eventually comes down to opening different apps on your phone, and manually looking for what you want to watch.

With the limitations on the Fire TV in India, your phone – be it Android or iOS – may end up being smarter, depending on what you’re looking to do. While the Fire TV Stick can look up apps, it doesn’t launch them, something both Google Now and Siri support. If you're searching for things, doing so on your phone with the Chromecast is likely going to be quicker than using the Fire TV.

In terms of video output, both the Chromecast and Fire TV Stick can output 1080p. The latter also has support for H.265 (HEVC) files, thanks to the quad-core chip inside, so your Prime Video titles will load faster and consume less bandwidth. And since Amazon’s offering also has internal memory (unlike Google’s) it can pre-fetch video files to further reduce wait times.

On the other hand, phone apps always tend to get updated first and be more optimised than their Android TV counterparts. That means you’ll get newer features with the Chromecast, and encounter less bugs, or crashes. You can read about that in detail, from our experience with Indian apps on the Fire TV Stick.

Both sticks have support for dual-band Wi-Fi, so there’s no problem with network speed or congestion. The Fire TV Stick also has Bluetooth, which allows you to pair up wireless headphones for audio. That’s a neat addition, especially if you regularly watch TV with your partner sleeping.

Owing to the install base for Android, the Chromecast enjoys a much wider support base, with Google claiming around 20,000 apps. By comparison, Amazon said it had 3,000 apps, games, and services for the Fire TV Stick. Both give you access to the most popular services – Netflix, Hotstar, Eros Now, Voot, Sony Liv, Airtel Movies, and many more.

But with Google and Amazon on a warpath, their own offerings are missing on each other’s platform. You won’t get Prime Video on the Chromecast, and Play Music is missing on the Fire TV Stick. Thankfully, YouTube works on the latter, by relying on the website’s TV-optimised version.

The other advantage of the Fire TV Stick is that you don’t need to have all the apps always on your phone. Without them, you wouldn’t be able to cast anything to the Chromecast. That’s even more frustrating if you don’t have enough space on your phone. 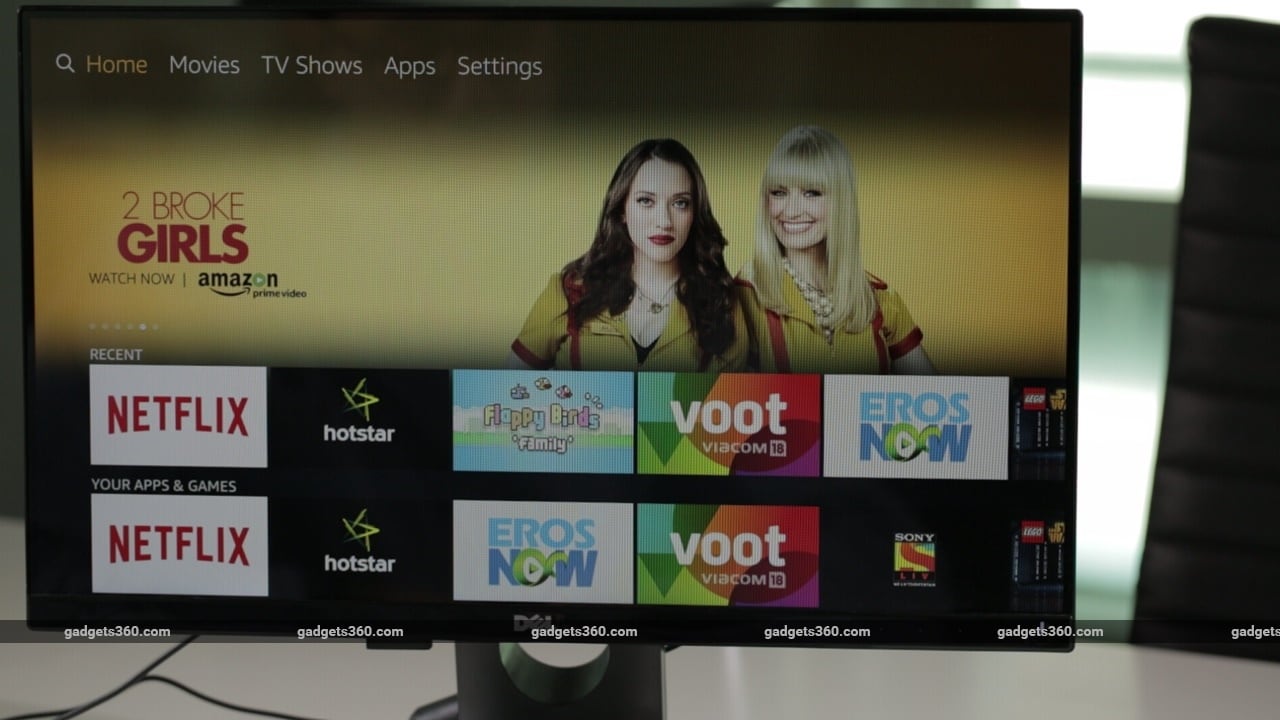 In addition to streaming media, the Fire TV Stick also has support for games. The Amazon App Store for India is lacking most of the big names – Alto’s Adventure, and Crossy Road – but there are a couple in Flappy Birds Family, and Lego Star Wars: The New Yoda Chronicles. Unfortunately, Amazon isn’t selling the Fire TV Gaming Controller in India, which makes for a poor experience with the remote.

Beyond that, you also get access to a variety of apps, be it for productivity, lifestyle, news, and more. With the Chromecast, you can always mirror your phone screen to the TV, but playing games won’t be feasible, since there’s usually a bit of lag, frame drops, and the like.

Both have mirroring support for your Android devices too. While it’s native with the Chromecast, you might need to download a supported app on the Fire TV Stick and your phone. There are a bunch of options that you’ll find in the Amazon App Store. Google’s second-gen Chromecast retails for Rs. 3,399 on Flipkart, but you should be able to get one for slightly lesser during sales.

Amazon’s Fire TV Stick is more expensive at Rs. 3,999. You should factor in that Amazon gives you more for your buck, with a Bluetooth remote, and internal storage.

If you haven’t subscribed to Prime yet, you can get Amazon Pay cashback for Rs. 499 with the Fire TV Stick. For what it’s worth, it’ll likely see a price drop during Amazon’s ‘Great India’ sale later this year.

Overall, we have a tie between the Google Chromecast and Amazon Fire TV Stick - what works for you though will depend on how you intend to use it, and we hope the details we’ve shared above will help you decide. If you still have any questions, leave them in the comments section below, and we will try our best to answer them.