All of Marvel's Post Credit Scenes, From the Worst to Best

On Friday, Ant-Man releases in India, and it's been confirmed that it will have two stingers (short clips that play after the movie is over) - one mid credits, and one after the credits finish. Although Age of Ultron only had a mid-credits sequence, some of Marvel's other films had two - one a funny joke about the current picture, and the second usually linking the film to the rest of the Marvel Cinematic Universe (MCU).

(Also see: Who is Ant Man? Everything You Need to Know About Marvel's Not-So-Popular Action Hero)

While we're looking forward to Ant-Man and how that connects to the MCU, there are already a lot of stingers from previous movies, and you can watch them all for yourself on YouTube. Here's a list of all of them, ranked.

Iron Man 2
There are a couple of small references to New Mexico in Iron Man 2. And then we get to see Coulson standing in front of a giant crater. The perspective changes, and we see that Thor's hammer Mjolnir is lying in the middle.

While we love Coulson and Agents of Shield, this is our least favourite stinger, which doesn't have much happening. The whole thing boils down to a single shot of Mjolnir, and while it was good to know that more Avengers were coming, they could've done more with it.

Incredible Hulk
General Ross is sitting and drinking in a bar, when Tony Stark walks in and says that he thinks hardware is much more reliable than super-soldiers. Not much actually happens, beyond the promise that Stark is recruiting for the Avengers, but this doesn't really come out much in the later films in the MCU.

The clip has all the hallmarks of a good stinger, but something feels off about it. Fury, or even Coulson, might have been a better choice for this stinger, particularly considering how Tony Stark's character is developed from Iron Man 2 onwards.

Thor: Dark World
Dark World also gets two post credit scenes. The first one has us meet the Collector, who has a much bigger part to play in the Guardians of the Galaxy. The Asgardians don't think they should keep the Tesseract and the Aether together, and so they want to Collector to take the latter. This scene was big first because it brings in the Infinity Stones, and second, introduced the larger world beyond Earth and Asgard, which we would explore further in Guardians of the Galaxy.

The next clip showed Thor returning to Earth unexpectedly, and swoops in for one last kiss with Jane Foster.

The first clip in particular helps set up the larger world of the MCU, and that's cool, but the tone of the scene felt off, and in particular, didn't fit well with the movie it followed, which is why it's so low on our list.

Captain America
The Captain is working out his aggression on punching bags, and as he knocks one right off, Nick Fury arrives with a mission. What follows is a teaser for the Avengers and set up the first film, bringing together Iron Man, Captain America, and Thor for the first time.

This scene is actually very cool, but the reason it's not higher on our list is because instead of a standalone clip, it was just a teaser trailer for the next film.

Update: It turns out that depending on the copy you saw, the last scene of the movie might have also been shown as a stinger. In the copy we had seen, Captain America waking up in the modern world is shown before the credits.

Thor
Nick Fury meets Erik Selvig, and talks about the "New Mexico situation". He then shows Selvig the Tesseract, the connecting tissue for all of its films until The Avengers. This scene also shows us that Loki is controlling Selvig, which is what kicks off the events of the Avengers.

Iron Man
The movie that kicked off the MCU still has one of the coolest post-credit scenes as well. The film ends with Nick Fury scolding Tony Stark. Fury's tone is perfect as he tells Stark he's become a part of a much bigger universe. And then he drops the bomb we were all waiting for - the Avengers Initiative.

The promise of a bigger world and Nick Fury's scolding were both just perfect, and set the tone for the rest of the MCU.

Age of Ultron
We couldn't find the Age of Ultron post credits scene on YouTube since the movie only came out recently, but it's a short clip which shows us Thanos finally getting up from his throne and slipping on the Infinity Gauntlet. Thanos wants to collect all the thrones and gain godlike power over the whole Universe, so it's cool that the scene finally shows him about to do something for the first time. 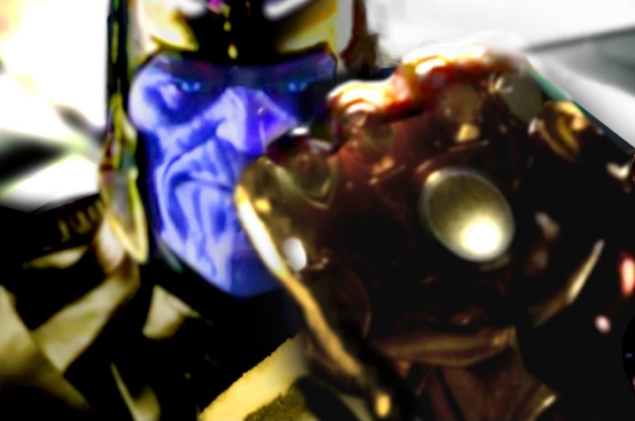 The second stinger in the film shows Bucky Barnes - the Winter Soldier - visiting a Captain America museum, but not much else. It's so short that both are in the clip below.

Bucky's clip was pretty short but promising considering you know that Bucky eventually takes over the mantle of Captain America. But the Age of Miracles clip in particular was fantastic, and does a great job of setting up Age of Ultron.

Guardians of the Galaxy
The first is a really simple scene which shows Drax cleaning a knife, oblivious to the fact that baby Groot is in a pot, and dancing to the music. It's a cute clip, and one that really works after Groot's big sacrifice at the end.

The second post credits clip shows the Collecter, sitting in the wreckage of his collection. He's sitting wearing a bandage and Laika comes and licks his face. Howard the Duck is seen, and his cage has been destroyed too.

The post-credits for Guardians of the Galaxy were spot on. Dancing Groot was hilarious and cute and helped dial down the tension built up in the last few sequences, making us laugh again. The clip with the Collecter meanwhile showed how other people are affected too, and the shout out to Howard the Duck was completely unexpected and funny.

Iron Man 3
This is actually one of the funnier post credit scenes in the MCU. As the credits are playing, Tony Stark starts talking, and you see that he's on a couch, talking to Bruce Banner - who has fallen asleep. Stark then gets annoyed because Banner was actively napping. He finally says, "I'm not that kind of doctor."

We really liked this scene because it showed the growing relationship between the characters, and not just as superheroes. The best moment of Age of Ultron was seeing the whole team relaxing together after a party, and this scene catches a hint of that.

The Avengers
This movie has two stingers - we get to see Thanos for the first time, and hear the phrase, "to challenge them, is to court death." On hearing this, Thanos turns and grins creepily, and it's perfect because as fans know, Thanos is in love with the physical embodiment of death, and is trying to court her.

The second stinger just features all the Avengers sitting around, looking beaten and bruised, and quietly eating shawarmas. It's funny, in an understated way, and just ties up a joke started earlier in the movie.

The Thanos clip is easily the best of the bunch as it manages to seem creepy and full of atmosphere for anyone watching, but also gives you that extra punch if you're a comic book fan. And the shawarma scene is just hilarious to watch after that big action sequence at the climax of the movie.

That's the order in which we like the MCU stingers, but which ones are your favourites? Tell us via the comments.