Abhijeet Kini, Creator of Angry Maushi, on Satire and Indian Attitudes Towards Art 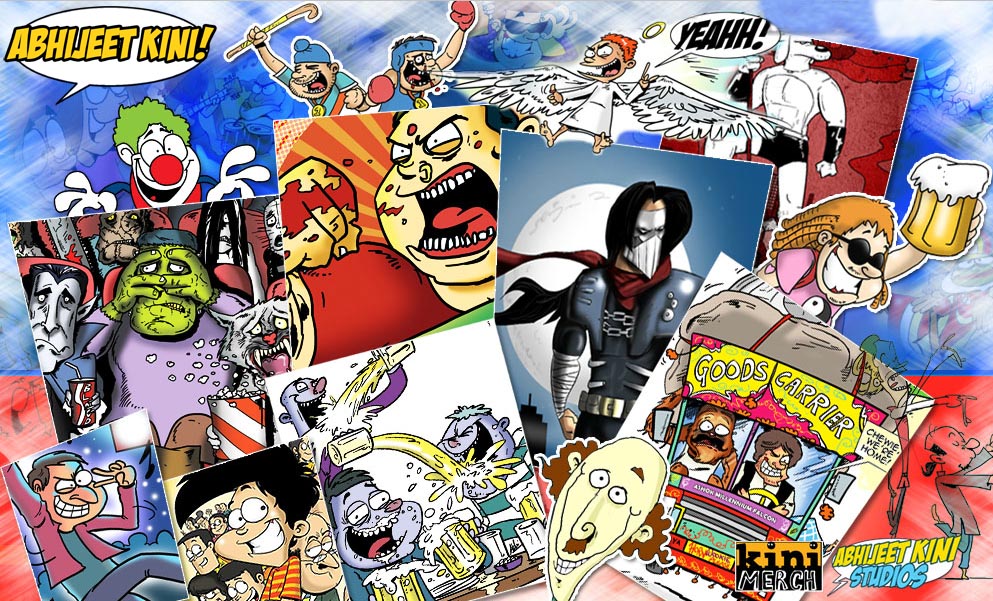 “You’re an artist, but what do you do?” is the kind of question Abhijeet Kini, 33, hears from people all the time. This, after being a successful comic book writer and illustrator for more than a decade, having worked extensively for fortnightly magazine Tinkle, and created his own works such as Angry Maushi, which has seen three releases in as many years.

Angry Maushi didn't start off as a comic book though. Kini first drew it back in October 2011 for his merchandise-line called Kini Merch, which he runs alongside his wife. It only transitioned into a comic book at Mumbai Comic Con 2012, and has gone on to become the closest thing to Kini's heart. "It was created as a symbol for Mumbai, a face for the city of sorts," he says, and then adds, "now people recognise me through this series."

While Angry Maushi stands as one of the few socio-political satire comics in India, that was not the intention in the beginning.

"It didn’t start off as a political thing. I just wanted to keep it like something that made fun of everything around," says Kini. "I have a lot of opinions about ads we see, celebrities we keep reading about, politicians – there wasn’t a single-minded aim to make fun of this or that. It was an overall satire."

Some sections of the audience have questioned if it was meant to be propaganda, but Kini maintains that there was no political message, even if he was "speaking out against some hypocritical issues" in the political domain, involving personalities that tend to rile up the media and public. His goal has always been to remain topical, and the atmosphere of Angry Maushi's second and third release - with the Indian general election hovering over our heads in 2013-14 - simply contributed to the content.

In a country and state - Kini is based in Mumbai, Maharashtra and his work touches upon regional issues as well - with extreme sensitivity to political satire (or any other kind of satire, for that matter), the writer-illustrator has somehow managed to avoid controversy. Kini thinks that is down to the fact that comic distribution in India is still very limited, so his work doesn’t reach every hand. "And thankfully so," he adds with a short laugh.

The only hullabaloo for Angry Maushi has been from angry parents, who aren't happy with the amount of violence in the comics. Kini has a simple reponse to that, though - Angry Maushi isn’t meant for children, Kini says, and all issues carry a disclaimer that says as much.

It's a part of the larger problem in India, Kini says. Artistic professions are looked down upon by most parents, considering it not to be a safe future for their kids, he says. "There is still a certain section who doubt if their kids are good enough, and to be safe, they push them into the usual engineering, medicine," he adds. "That’s where young talent gets destroyed, when people don’t get encouragement at the right time."

This outlook extends into Comic Cons, where people come up to Kini at his stall and converse in a condescending fashion. "They are like 'You’re an artist, but what do you do?'," he says. It shows up in other aspects too, such as when people try to bargain the price of a comic, point out that the paper quality is bad or the colouring is not good, and balk at the idea of paying Rs. 100 for a 16-page issue..

When he talks about parents providing encouragement, it comes from a place of experience. Kini's parents always gave him the freedom to explore. Kini grew up reading Tinkle, and he recalls how his mother took him to meet Uncle Pai - the colloquial name for Tinkle's founding editor Anant Pai - at a young age. Kini was enthralled, and remembers getting an assignment that he submitted and even got feedback upon. So when years later he got the chance to work for Tinkle, it was a dream come true.

He's come a long way post that, self-publishing his way into success with Angry Maushi. As for what keeps him going, Kini says that his work is very satisfying artistically before adding: "If you love what to do, you never work a single day. That’s the mantra you need to follow, if you’re in the creative fields."

Another thing that has helped in recent years has been the rise of Comic Cons in India, which Kini says are up there with the Comic Con scene internationally. Kini tries to attend all of them across the country, and he believes the events have provided not only a platform for creators at every level, but also unified the whole scene. It's also become part of the premise for his next work called Fanboys, which debuted at the Hyderabad Comic Con 2016 last month, and will launch at the Mumbai show on Saturday.

Fanboys follows a group of three - a comic book collector, an action figure connoisseur, and a cosplayer - who are trying to get to a convention, but somehow end up in Hell. “I always base my stories in reality, and then add a twist," Kini says. He wanted to make something that was an easier read compared to Angry Maushi, with no graphic violence so he could expand on his reader base. Plus, what better way to connect to the Comic Con audience than release a book on the fanboys at a Comic Con, Kini says.

Kini isn't ruling out a return to Angry Maushi in the future, and if he does, it will be longer and revolve around a singular theme. He doesn't have any specific ideas just yet, "but in India, there’s so much happening, politically and socially, that I really don’t need to put in much effort to pick a good topic".

For now, the focus is on diversifying his work - and passing on his passion to other budding comic creators out there. And to do just that, Kini took up teaching at one of India's leading film schools - Whistling Woods - earlier this year. “I love interacting with that age group, and I love interacting with people who are into comics," he says.