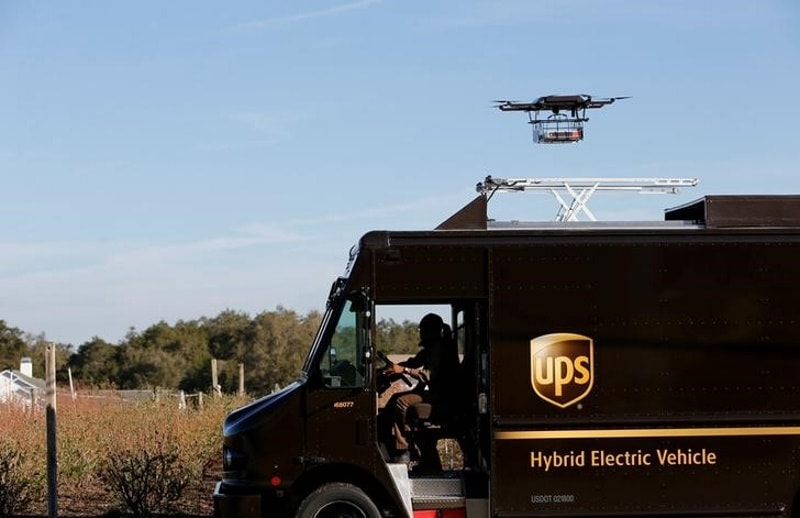 Package delivery company United Parcel Service Inc said on Tuesday it will consider raising prices across the board in coming years to offset pressure on margins, particularly from the rising costs of delivering packages to e-commerce customers.

"We... always have to be diligent about getting the right return," particularly as costs rise, Richard Peretz, the company's chief financial officer, said at an investor event.

His comments came a day after the company tested home delivery by drone in Lithia, Florida, the first step in what it hopes will be more automated - and cheaper - deliveries in rural areas.

UPS is grappling with lower margins for e-commerce, which have dented earnings. Businesses typically get more packages per stop than residences, making delivery to individual homes more expensive.

Drones could be one way to reduce those costs.

In Monday's test, a drone launched from the roof of a UPS vehicle flew autonomously toward its destination, dropped a package and then returned to the vehicle as the driver continued on a delivery route.

"We see this as an exploration into this new technology," John Dodero, vice president of industrial engineering at UPS, said ahead of the test.

The company is also considering how changes in global trade, particularly with Mexico, will impact its business as US President Donald Trump vows to renegotiate the North American Free Trade Agreement (NAFTA), which took effect in 1994.

The US-Mexico supply chain is "critical," said David Abney, the company's chief executive. NAFTA "is a little bit old. It's not reflective of 21st century agreements," he said.

But Abney added that the company believes "global trade certainly drives jobs, and we think that southern border is very important to our customers and to the country."

UPS has tested drones before and is considering other uses for the technology, such as in inventory control and helping inspect planes and vehicles within hangars and warehouses.

But UPS has no timeline for when drones might be put into wider use, Dodero said, partly because federal authorities are still developing regulations on how to use the technology.

The company also said it will expand US pickup and delivery to six days for ground shipments and offer Saturday delivery in the largest metropolitan areas.