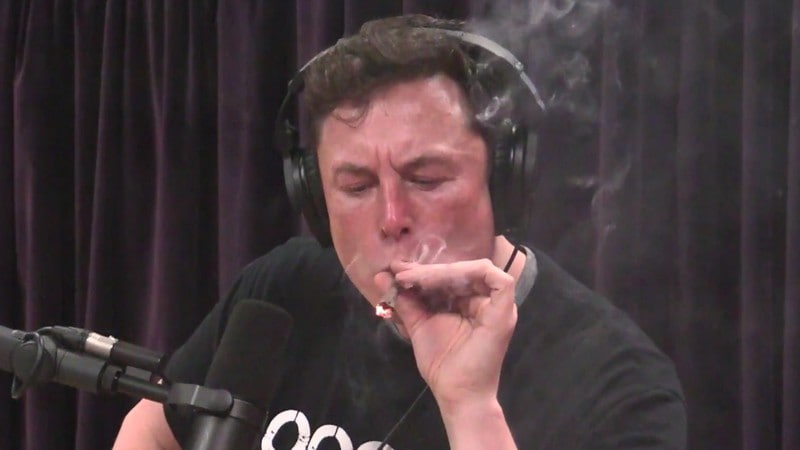 Entrepreneur Elon Musk sipped whiskey and puffed a little weed while musing at length about artificial intelligence, colonising space, and the need to give love a chance.

Musk shared thoughts on those topics and more during a podcast with comedian Joe Rogan that lasted more than two hours, stretching into the early hours of Friday.

At one point, Musk described the constant barrage of ideas in his mind as being "like a "never-ending explosion," and said he wondered as a young boy whether he might be insane because it didn't seem to happen to other people.

His comments came as Musk drew questions of late over his leadership and demeanour.

The reasons include an infamous tweet in which the businessman said he was taking Tesla private and had funding lined up - a statement he later backtracked amid an uproar - and disparaging remarks about a Briton who helped save boys trapped in a cave in Thailand.

"I don't think you would necessarily want to be me; you wouldn't like it that much," Musk quipped.

"It might be great when it is turned on, but what if it doesn't turn off?"

During the course of a wide-ranging chat with Rogan, Musk drank whiskey and tried a marijuana-and-tobacco cigarette proffered by the comedian.

"I don't find that it's very good for productivity. It is sort of like a cup of coffee in reverse."

He maintained that getting things done, especially being useful to others, was among his joys.

"A lot of people don't like humanity and think it is a blight, but I don't," Musk said.

"It may sound corny, but love is the answer. Spend more time with your friends and less time on social media."

'Occupy Mars'
Musk said that when it comes to social media he only uses Twitter, and that is for its power to get messages out. He contended that he ignores the majority of negative comments at Twitter, but has occasionally been drawn in and made mistakes.

Nearly 90,000 people tuned into the podcast Rogan live-streamed with Musk at YouTube.

Musk said he is less worried about AI than he had been, mostly due to "taking a more fatalistic attitude."

He had long argued that AI would be humanity's undoing, with sentient software treating people, at best, like house cats.

Musk is now of a mind that whatever the future of AI, it is outside of human control.

A danger, he noted, is that humans will turn AI into a weapon to unleash on one another. A best-case scenario would be people merging with AI, enabling anyone to have "super cognition."

Musk appeared to get emotional while talking about harm being done to the atmosphere and oceans by burning fossil fuels.

"This is crazy," Musk said.

"The more carbon we take out of the ground, the more dangerous it is."

Musk, who wore a black t-shirt bearing the words "Occupy Mars" in large letters, also pictured a future in which humans explore and colonize the cosmos in manners depicted in science fiction films.

"I think the future in where we are a space-faring civilization out there among the stars, that is very exciting," Musk said.

"If we were forever constrained to Earth, that would not be a good future."

People Should Be Able to Sell Their Data if Privacy Is Dead, Some Argue
Lockheed Martin Partners With ESPN's Drone Racing League on Self-Piloting Drone Competition