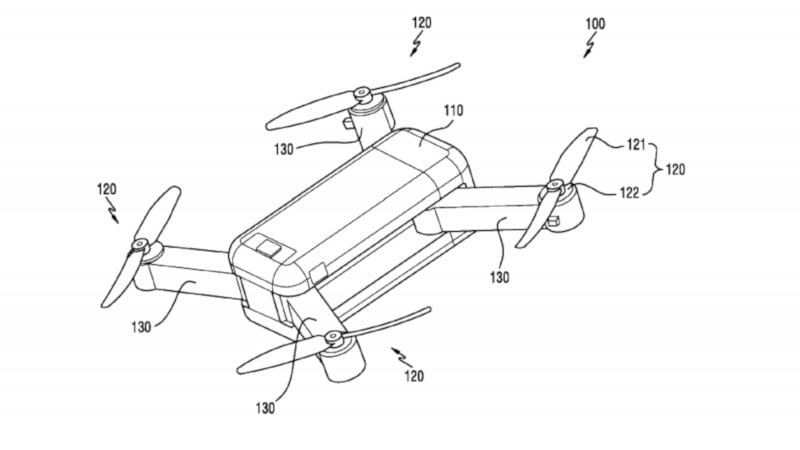 If a recent patent application is any indication, Samsung is planning to enter the drone market. According to a report, the South Korean tech giant is working on a foldable drone that will include features like a camera, gyroscope, accelerometer, and a barometer. There is no word on when this drone will be released for mass consumption, but the company does seem to be serious about the drone market as it has gotten as many as five drone-related patents this year alone.

As per a United States Patent and Trademark Office (USPTO) patent application, filed on June 15 last year, Samsung plans a foldable drone. The drone arms, on which the propellers will be fixed, can be folded and unfolded against the main body. The housing structure of the drone seems to be comprised of two compartments, which join together to form a compact unit. The patent application was first spotted by DroneBelow, which notes this is Samsung's fifth drone-related patent application to be published in 2018.

“The unmanned aerial vehicle includes a housing with a first housing structure and a second housing structure, a wireless communication circuit coupled to the housing or located inside the housing for wireless communication with an external controller, a plurality of propulsions systems coupled to the housing, and a navigation circuit configured to control the plurality of propulsion systems,” Samsung explained in the patent application.

The patent suggests that the Samsung drone will have the usual capabilities, like the support to wirelessly control it using a smartphone, tablet, or PC. Additionally, Samsung drone may also feature support to control it via other electronic devices like home appliances such as washing machine, wearable devices, body implants, and more.

Samsung's drone will also be sensor heavy, with the likes of gyroscope, barometer, compass, ultrasonic, temperature, light and ultraviolet sensors present in the device.

The drone market, which is mainly dominated by the Chinese companies, is expected to top $11.2 billion in 2020. According to the 2018 Drone Market Sector report by Skylogic Research, DJI is current market leader with an estimated 74 percent market share, followed by Yuneec with 5 percent share and 3D robotics with just 3 percent. The entry of a giant like Samsung is certainly expected to shake up the industry.