Porsche Says Flying Cab Technology Could Be Ready Within Decade

Porsche is studying flying passenger vehicles but expects it could take up to a decade to finalise technology before they can launch in real traffic, its head of development said on Tuesday.

Volkswagen's sports-car division is in the early stages of drawing up a blueprint of a flying taxi as it ponders new mobility solutions for congested urban areas, Porsche R&D chief Michael Steiner said at the Geneva auto show.

The maker of the 911 sports car would join a raft of companies working on designs for flying cars in anticipation of a shift in the transport market towards self-driving vehicles and on-demand digital mobility services.

"We are looking into how individual mobility can take place in congested areas where today and in future it is unlikely that everyone can drive the way he wants," Steiner said in an interview.

VW's auto designer Italdesign and Airbus exhibited an evolved version of the two-seater flying car called Pop.Up at the Geneva show. It is designed to avoid gridlock on city roads and premiered at the annual industry gathering a year ago. 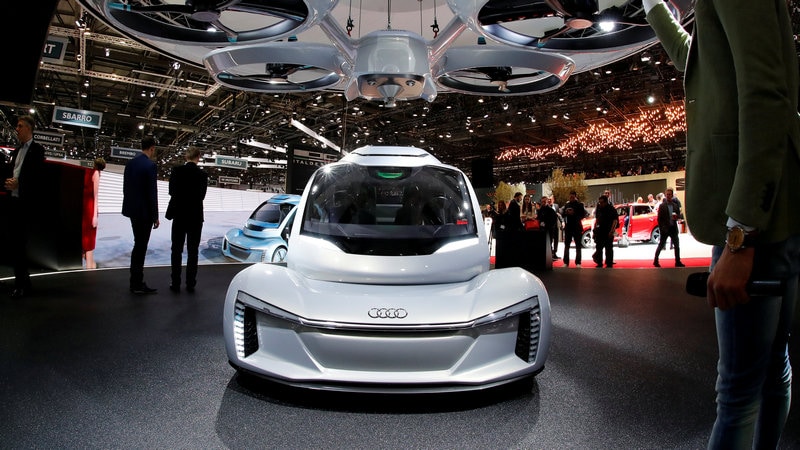 The "pop.up next" concept by Audi, Airbus and Italdsign at 88th Geneva International Motor Show

Separately, Porsche expects the cross-utility variant of its all-electric Mission E sports car to attract at least 20,000 buyers if it gets approved for production, Steiner said.

Porsche will decide later this year whether to build the Mission E Cross Turismo concept which surges to 100 kilometres per hour in less than 3.5 seconds, he said.