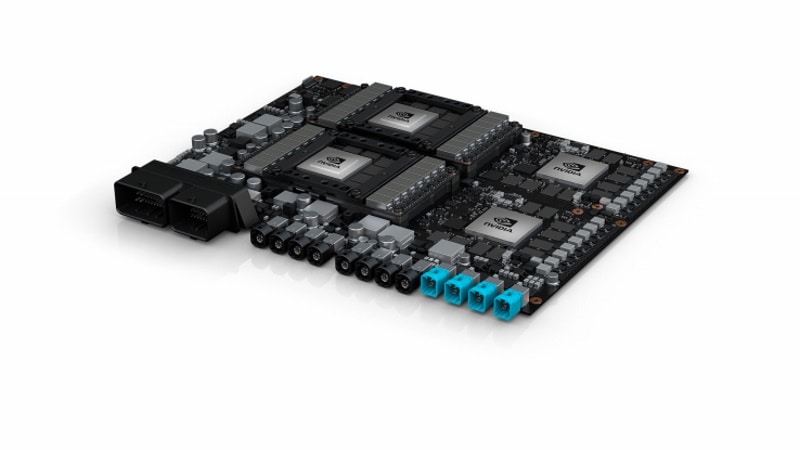 Deutsche Post DHL Group, the world's largest mail and logistics company, and ZF, a top automotive parts supplier, plan to deploy a fleet of autonomous delivery trucks based on the new chips, starting in 2019, Nvidia said.

They can handle 320 trillion operations per second, representing roughly a 13-fold increase over the calculating power of the current PX 2 class.

This dramatic improvement is a pre-condition for developing and testing future autonomous cars, experts said.

"Nvidia is one step ahead. But you can be sure you can expect (rival chipmakers) Intel, NXP and Bosch not to be too far behind," said Luca De Ambroggi, principal automotive electronics analyst with industry market research firm IHS Markit.

Computer chip giant Intel and its Mobileye automotive unit are working with German carmaker BMW and US auto supplier Delphi on their own autonomous driving platform due out in 2021. NXP has agreed to be acquired by Qualcomm to form the world's largest auto electronics supplier, while Bosch, the industry's top auto supplier, is working with carmaker Daimler

Nvidia's automotive director Danny Shapiro said in an interview that many of the first 25 customers using Pegasus chips would focus on robotaxis, which will be built without steering wheels or brakes and used only on dedicated routes. Bigger name automakers will announce vehicles running on Pegasus at their own product launches in coming months, he said.

Missing piece in driverless puzzle
The Pegasus line will be available by the middle of 2018 for automakers to begin developing vehicles and testing software algorithms needed to control future driverless cars, Nvidia executives told a developers' conference in Munich on Tuesday.

A level 5 vehicle is capable of navigating roads without any driver input and in its purest form would have no steering wheel or brakes. A level 3 car still needs a steering wheel and a driver who can take over if the car encounters a problem, while level 4 promises driverless features in dedicated lanes.

The deal between Deutsche Post, ZF and Nvidia will include future Deutsche Post StreetScooter delivery trucks. In Munich, the three partners are showcasing a prototype StreetScooter running Nvidia Drive PX chips used to control sensors including six cameras, one radar and one lidar, or 3D laser camera.

Initial use cases will be for logistics vehicles on private roads within freight centres or for long-haul trucking in dedicated lanes, Shapiro said: "They are not replacing the drivers, but making the drivers more efficient and safer".

For its current generation Drive PX2, Nvidia has said it has 225 customers, including car and truck makers, Tier 1 auto suppliers, high-definition mapping companies, start-ups and research institutions. These customers can make use of PX2-class software when they upgrade to Pegasus chips, Nvidia said.

These could encompass existing customers Tesla, including its latest Model 3. Others include Volkswagen's Audi A8, the first car to use Level 3 semi-autonomous driving features, Toyota Motor's next-generation autonomous cars and Geely's Volvo business.

De Ambroggi said Nvidia's Pegasus automotive chips were the first chips with the processing power for automakers to begin developing truly autonomous vehicles, which could be upgraded with software improvements ahead of actual roadway deployments.

But the analyst stressed that while such chips could find their way into mass-produced robotaxis running in defined lanes, these early fully-autonomous chips would likely only allow carmakers to develop prototypes ready for the driverless era.

Regulations, road-testing, nagging safety concerns - and questions about how power-intensive the new data-hungry chips will be - are likely to mean truly driverless cars for personal use won't arrive until at least 2025, he said.

Microsoft Outlook Gets Calendaring, Scheduling Features on Android and iOS
iPhone 8, iPhone 8 Plus Available With Up to Rs. 15,000 Cashback on Paytm