Early rider Alex Hoffman seen inside a Waymo during a demonstration in Chandler, Arizona, US

On the chilly October day the New York subway opened in 1904, the marvel of engineering and grit was greeted with horns, steam sirens and stations overrun by thousands of revellers. "Fast Trains in Tubes," blared one headline.

On Wednesday, 114 years later in sun-swept Arizona, the launch of the 21st-century equivalent came in a blog post and an email invite.

Google offshoot Waymo announced it is launching the nation's first commercial driverless taxi service in this and other Phoenix suburbs. The 24/7 service, dubbed Waymo One, will let customers summon self-driving minivans by a smartphone app, a la Uber or Lyft.

Waymo's move comes after nearly a decade of development, more than a billion dollars in investment and 10 million miles of testing on public roads. The project was embraced by top state and local officials even as questions have been raised here and elsewhere about the speed of the technology's rollout.

"In Arizona, we still do enjoy a bit of wild, wild West mentality. We have this great desire to be exploring and conquering this frontier," said Rob Antoniak, chief operating officer of Valley Metro, which helps oversee the metropolitan area's 500-square-mile transit system and next year will begin paying some Waymo fares for the elderly and people with disabilities, as part of a pilot. "And we enjoy a regulatory environment that embraces that attitude."

Waymo, part of Alphabet, is starting small, rolling out the service first to hundreds of the company's local volunteer testers, and only in part of this sprawling region of almost 5 million people. But the move is a major - and potentially revealing - step in the tightly controlled and hype-filled realm of self-driving vehicles. 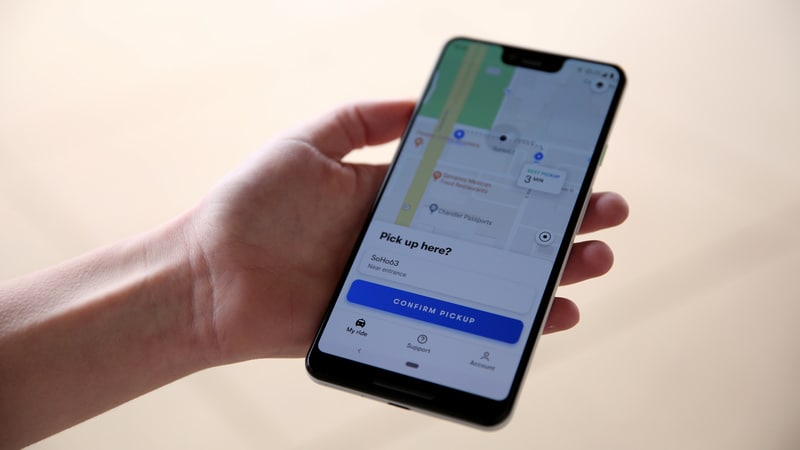 A Waymo employee hails a ride during a demonstration in Chandler, Arizona, US

"It's a big leap between testing this stuff and booking and transporting a passenger who's paying money for a service," said Costa Samaras, an automation and infrastructure expert at Carnegie Mellon University who worked as an engineer on a New York subway expansion early in his career. "This is real."

Waymo will now be putting its technology through the public wringer, with cellphone-toting customers - freed from nondisclosure agreements - ready to capture and tweet every miscue, just as they might with a bad airline flight, Samaras said.

"The trajectory of the industry, not just at Waymo, is going to depend on a lot of these early experiences. Do people feel safe? Do people feel comfortable? Is it seamless?" Samaras said. "If it is, we'll see more of it. If not, people will go back to the engineering room."

At stake is how driverless technology might change roadways, cities, businesses, congestion, pollution, privacy, crash tallies and leisure time, for better or worse - or whether it will fizzle, take decades to make a broad impact or be overshadowed by something else entirely.

There is significant public scepticism about self-driving cars, and polls find that most people don't want to ride in them. Earlier this year, a driverless Uber SUV killed a pedestrian pushing a bike across a dark street in nearby Tempe. The emergency braking system had been shut off for driverless testing, and the backup driver did not start slowing down until after the vehicle struck Elaine Herzberg, 49. That safety driver had looked down more than 200 times and her smartphone was streaming NBC's "The Voice" in the run-up to the deadly collision, according to investigators.

Waymo CEO John Krafcik said in March that his team's vehicles "would be able to handle situations like that."

In Wednesday's blog post, Krafcik said Waymo One "will make the roads safer and easier for everyone to navigate." The company's marketing pitch: "What if getting there felt like being there?"

Participants in the company's "Early Rider" volunteer program, launched 19 months ago, were sent emails early Wednesday asking them to join the commercial service. The company said it hopes to expand to more people and places "over time." Waymo is also testing in 24 other cities.

"Self-driving technology is new to many, so we're proceeding carefully with the comfort and convenience of our riders in mind," Krafcik said, adding that Waymo-trained drivers "will supervise our Waymo One vehicles" for an undisclosed period.

The company did not disclose prices, but it said riders would see an estimated cost on the app, based on time and distance. It will keep its volunteer program going in parallel, because "we're never done learning," Krafcik said.

Waymo's decked-out white minivans have become fixtures in the communities of Chandler, Gilbert, Tempe and Mesa, where they zip along wide boulevards, following the 45-mile-per-hour speed limit; duck into quiet cul-de-sacs; and inch through church parking lots.

Over recent days, they blended in unobtrusively. One made a smooth left turn in front of a stopped white Mercedes, seemingly unfazed by the Benz's red Rudolph nose and decorative antlers.

Another signalled its intent to change lanes with an odd combination of insistence and patience, switching on its left blinker three separate times before a black Honda finally cleared the way for it to merge. A third Waymo jolted rightward before a corner to avoid rolling through a bus-and-bike-only lane, markings a human might not have followed so literally.

The company has also worked to add safe drop-off points. Before one upgrade, for example, the vehicles would stop along the street at kiss-and-ride transit centres, rather than roll into areas designated for passenger drop-offs.

In addition to ride-hailing, Waymo's moneymaking strategy includes getting businesses to pay for transporting customers or employees.

There's a white, blue and teal "Waymo Passenger Pickup" spot amid the Christmas wreaths and palm trees outside a Sprouts market at the Ahwatukee Foothills Towne Center, and another outside the movie theatre there.

A few miles away, in the parking lot of another Waymo partner, Walmart, four spaces have been marked off with red paint and reserved for Waymo passenger pickup, though shopping cart collector Anthony Najar says the driverless minivans roll in to pick up waiting senior citizens only "once in a blue moon."

Najar is concerned about driverless systems failing, saying, "You can never really rely on technology," though ordinary drivers can short-circuit as well, like the Lyft driver who backed hard into his bumper.

In higher rotation are Walmart's reserved spaces for humans with regular cars. Web orders are walked out to drivers, such as Andy Mendez, 17, a high school senior who just got his license and whose mom dispatched him to pick up the week's groceries in the family's silver Honda. He's not ready to give up the wheel.

"Listening to music, windows down, glasses on. It's nice!" Mendez said.

Some observers predict a less-than-enthusiastic reception over the coming months from potential customers and from fellow road users, who one industry-funded study acknowledged have been made guinea pigs in a grand technology experiment "they did not consent to take part in and cannot opt out of."

"This is truly not proven. It's not a proven technology," said Missy Cummings, a former Navy fighter pilot who heads Duke University's Humans and Autonomy Lab. "Proven to a company - that doesn't meet my metric of reliability. Companies will do what's in a company's best interest."

Cummings, unlike some other critics, says the cars do need to get practice in the real world. She wants them painted in gaudy colours, bright pink if possible, so people know exactly where they are - and to "expect quirky behaviours."

"Mark them so people have an understanding that these cars are still baby cars, that they're still learning and that they need to be given a wide berth," Cummings said.

But Samantha Jackson, who started as an Early Rider last year, said the risk is not from Waymo minivans: "The problem is you still have a lot of humans." Although she lives in a region largely defined by the automobile, she doesn't like driving, in part because she's a distracted driver herself.

"My podcast just ended and I want to listen to the next one. I just dropped my breakfast on the floor," Jackson said. The senior operations director for Downtown Phoenix Inc. thinks Waymos are already safer than people.

But when she was asked to start paying this summer - as Waymo experimented on some early riders to figure out where to set prices - she said her family's usage plummeted. "It would just be cost prohibitive," she said. She would consider transferring over to the new commercial service, though, for occasional trips, and she hopes Waymo starts a subscription program.

Even as paying members of the Early Rider group, the family was prohibited from taking her son's best friend with them when they took a Waymo to the movies. But in the commercial service, packing in friends is fine.

Waymo and its competitors around the world are expected to branch out to dozens more communities over the coming years. General Motors is planning to launch its own driverless taxi service next year, Ford is doing so in 2021 and scores of top tech firms and startups are racing for a piece of what boosters say could be a vast market.

Antoniak is a transit wonk, and this week marks the 10th anniversary of the launch of the region's light-rail line. On a recent day, he was wearing blue-and-green rail car socks.

He believes Waymo will add to, rather than eat up, transit services. Half of the regional system's customers have no car or driver license, their average household income is about $32,000 a year and they need more options, he said. It's better to work with driverless firms from the start and learn from each other, rather than be outmanoeuvred, as the taxi industry was by Uber, he said.

Antoniak has ridden 20 hours in a Waymo so far, and he'd welcome the chance to turn his driving over to one full time soon, freeing up commuting time for email or anything else. His car has been totaled three times heading to and from the office, he said, due to the carelessness of others.

"It doesn't sleep. It doesn't drink. It doesn't yell at a kid. It doesn't text. It doesn't listen to the news and think, 'Oh, my gosh, what's going on?' It doesn't daydream about the earthquake, as I did on Friday, wondering where cousins were," Antoniak said. "It doesn't do that. It just drives."