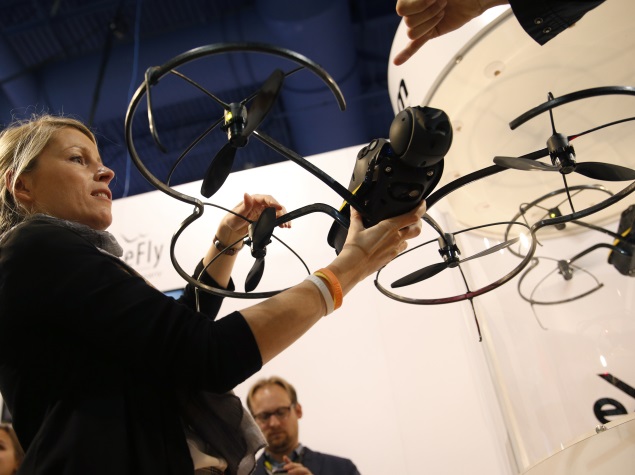 When you're searching for the hottest gadgets on the floor of this year's consumer electronics show, be sure to look up. For the first time ever, there's an International CES section dedicated to drones. More than 20 companies are showing off dozens of different models.

"People have been saying the drones are coming. But I think the fact that we have an unmanned systems area dedicated to them now means they're not coming. They're here," says Andrew Amato, editor-in-chief of Dronelife.

Global revenue for drones will reach $130 million (roughly Rs. 820 crores) this year, up more than 50 percent from last year, according to the Consumer Electronics Association (CES). One new feature attracting drone buyers is so-called "follow me" technology, which allows a drone to automatically follow and film the user, who wears a tracking device on his or her wrist. It's a cool tool for getting aerial footage of extreme sports.

"When you're ready to surf, just push a button, the air dog will come over, shoot you. When you're done, press a button and it will go back over to the beach and land and you're ready for the next wave," says Edgars Rozentals, founder of AirDog, which is delivering test kits to pilot customers after CES. And that action footage is looking sharper than ever as more drones are taking advantage of today's 4K resolution cameras and image stabilizers.

But federal regulations haven't caught up with advancements in drone technology. The Federal Aviation Administration, still concerned about drones getting in the way of commercial aircraft, requires drone users to have prior approval before flying their drones. However, just this week the FAA did issue new permits to allow drones to monitor crops and photograph properties posted for sale.

Drone operators say once other restrictions are lifted, the sky's the limit.