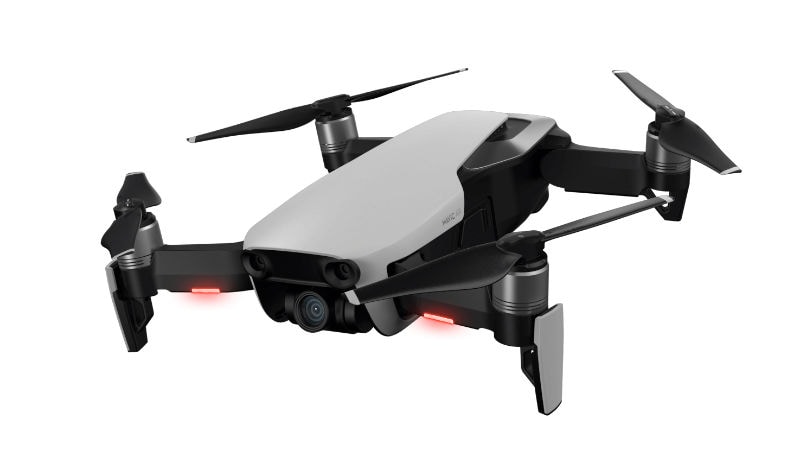 DJI has launched a new model in its drone lineup. The DJI Mavic Air is priced at $799 (roughly Rs.50,900) and falls in between the DJI Spark and DJI Mavic Pro. The drone will be available for sale from January 28. The DJI Mavic Air derives its features from both the higher-end Mavic Pro priced at $999 (roughly Rs. 63,600) and cheaper Spark, currently available at $399 (roughly Rs. 25,400). The new drone incorporates the premium features of Mavic Pro such as longer flight times and 4K video shooting and comes in a compact size like the DJI Spark.

In terms of specifications, the built-in camera using a 1/2.3-inch sensor in DJI Mavic Air shoots 4K videos and with a wide-angle 24mm f/2.8 lens it can capture 12-megapixel images. It can also capture 32-megapixel panoramas. The camera on the drone is mounted on a newly designed three-axis gimbal. The Mavic Air also has a redesigned ventilation system that DJI claims keeps it from overheating.

The DJI Mavic Air can reach speeds up to 68.4 kilometres per hour and can withstand winds of up to 38 kilometres per hour. The drone also features Advanced Pilot Assistance Systems (APAS), which is an obstacle-avoidance software.

The drone sports a microSD card slot alongside 8GB of inbuilt storage. Users can directly save photos and videos in the drone. For exporting files the drone has a USB 3.0 Type-C port. The DJI Mavic Air comes with a dedicated remote controller. It also brings in special features like SmartCapture, QuickShots, and ActiveTrack. The drone comes in three colour variants - Arctic White, Onyx Black, and Flame Red.

Apple HomePod Launch: Is It Too Late to Take on Google and Amazon?
Will the PS4's God of War Break in Tradition Extend Beyond Its New Release Date?