In India, mountain biking remains a niche in the world of cycling. If we told you there's a community of hardcore mountain bikers in India, you'd probably be surprised. What's more, there's enough demand that you'll actually find companies that build custom-made mountain bikes. One such company is Pune-based Psynyde, though it has a tiny customer base, with just 5-6 orders each year.

Now though, the Psynyde team wants to go mainstream and to that end it's launched a new bike it calls the Furan, on crowdfunding website Fuel a Dream. Gadgets 360 spoke to the Psynyde team, and one of its founders, Praveen Prabhakaran, says that he hopes the Furan will help the company to gain a footing in the "mainstream" market.

Prabhakaran's a hardcore cyclist and, so far, Psynyde has only been catering to people who're serious about mountain biking. When he says Psynyde wants to go mainstream, he means that it wants to cater to people that are just getting into mountain, biking rather than the experts that it already sells to. But what do you require a mountain bike for? It's a useless spend if you're only going to ride around in parks and roads, as a mountain bike on is designed for rough terrain. These bikes are a lot stronger than road bikes - they can handle rough terrain and some high-end ones can even withstand 40-feet drops, which justifies the much higher price tag.

(Also see: An Electric Scooter Made in India Is Ready to Disrupt the Auto Industry) 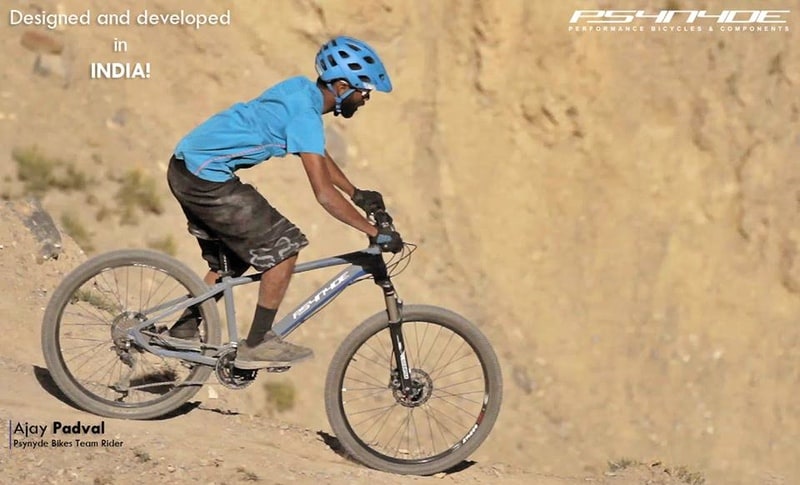 There are some big differences in design when it comes to mountain bikes. For most of us, the word cycling is likely to bring up images of Tour de France or the track races at the Olympics. These athletes use sleek bikes with thin tyres that are geared towards usage on smooth roads or tracks. Mountain bikes are much heavier, have thick tyres with much better grip, and use disc brakes. Disc brakes are located at the centre of the wheel as opposed to rim brakes that are closes to the tyres (and literally on the rim).

Prabhakaran says Psynyde only works with the highest-grade materials in its bikes. He does concede that to grow in India the company has to have a few bikes in the lower price ranges as well. The Furan will be available to backers starting at Rs. 27,400, which he says isn't too expensive for a mountain bike. Different variants go up to a whopping Rs. 79,900. "Back when I first started mountain biking in 1995 I found that many bikes in the market have the MTB (mountain bike) sticker but when we used them something broke," he says. Wanting a mountain bike that "looks like it means business" led to Prabhakaran taking up making these bikes full time, though you have to wonder if the Furan is still not to expensive for novices. In the market, you can find cycles that are marketed as mountain bikes for a third of what the Furan is priced at, but once you start looking at well-known brands in the enthusiast space, you see plenty more that cost about as much as the Furan.

(Also see: An Indian Startup Is Crowdfunding an Electric Bike)

From 2009 until now, the company was only into custom-made mountain bikes. These bikes, Prabhakaran says, were tailormade for their customers. "Custom made doesn't just mean we sourced some custom parts. It means the bike is tailored to the customer's body weight," he says. What's more, Prabhakaran claims that the bicycle industry is much more technologically advanced than the motorcycle industry. The technology used to make a good mountain bike is more complex, he claims. "For the Psynyde Furan we have worked a lot on the geometry. This gives riders a lot more control on the bike," he says, adding that small changes to the angle and width of the handlebar make a big difference to the riding experience. There are more details about the bike in Psynyde's video below.

Interestingly, while the Furan carries the Psynyde brand name, not all of its parts have been made by Psynyde. "In the biking world, it's very weird. People want certain parts such as the brakes to be from Shimano, so we are sourcing those parts from them," he says. "The frame and certain parts like the handlebar are ours. And we've spend a lot of time designing the bike," Prabhakaran adds. The catch is that outside of hardcore cycling circles Psynyde is relatively unknown. This is going to be an additional challenge when crowdfunding the Furan. The campaign has thus far raised nearly Rs. 50,000 against a Rs. 15 lakh goal, with 50 days to go. "The timing is right for us to go mainstream," he says. If you're interested in backing the Furan, you have 50 days to do so, with delivery planned for December 2016. You can check out more details about the bike in Psynyde's video below.

If the campaign doesn't succeed, Prabhakaran claims that some of India's biggest high-end cycle dealers will stock the bicycle. Sudeep Mane, who's handling the financial side of things at Psynyde says, "In the high-end cycle market, most dealers are cyclists. They've come to us many times for [custom-made] parts." Mane says Psynyde has spoken with many dealers across major cities in the country already. "We need our dealers to have knowledgeable staff and to offer serviceability, as most servicing happens at the dealer's end," he adds. The Furan will go on sale one way or another, Psynyde claims, and those who back the project will get it for a discount.

Further reading: Psynyde, Psynyde Furan
Pranay Parab Email Pranay Pranay is in charge of podcasts and videos at Gadgets 360. Over the years, he has written over 500 tutorials on iPhone, Android, Windows, and Mac. He has also written in-depth reported features on the intersection of technology and culture, reviewed fitness wearables, been the social media manager, started two podcasts, and produced several tech videos. He loves travelling, particularly to places not frequented by tourists. He keeps running half-marathons across the country and hopes to complete ...More
Apple Partners Flipkart to Sell iPhone 7, iPhone 7 Plus in India
Xiaomi Reveals Dual Rear Camera Setup for Next Smartphone