Inside the Tesla Model 3: Here's Why It's Like a Giant iPhone

I joined a buddy recently to fawn as he received his long-delayed Tesla Model 3. When we first climbed in, the radio was blaring - and we couldn't find an off button. There was nary a knob in sight. After a minute of frantic swiping on the oversize tablet that substitutes for a dashboard, I discovered how to how to turn down the volume by tapping repeatedly on an icon.

After a bit more swiping on the Model 3's touch screen - let's call it a DashPad - I unearthed something else: privacy settings. Facebook-style. Tesla had, by default, granted itself permission to collect video clips of wherever we drove.

Later, a message popped up. Tesla wanted two hours to download and install an update.

The Tesla Model 3 is a lot like something you already know: a smartphone. But it's more like an iPhone circa 2008, before we had figured out how to live with them.

Last week, Tesla loaned me a Model 3 to review for The Post. Over three days, I navigated the steep learning curve to operate this iPhone with wheels, and ended up convinced it is the car of the future. I also came away a bit concerned about our future.

Even if you're not interested in owning a Model 3, don't believe in electric cars, don't like CEO Elon Musk, or don't believe Tesla will survive to produce them for $35,000 (roughly Rs. 24 lakhs), Tesla is setting the agenda for the auto industry. The Model 3, through cellular, Wi-Fi and Bluetooth connections, is constantly online in ways mass vehicles haven't been before. Its computer, dashboard, key, motor, brakes, battery, power plug, and cameras (I could go on) are all sending and receiving data. Tesla is turning the car into the largest connected device you'll own.

I'll leave the critique of the Model 3's driving performance and build quality to others. I think the Model 3 ought to be reviewed like a connected device, too. There's a familiar arc: Smartphones started as expensive flip phone substitutes, before morphing into surprisingly useful mobile computers and eventually hackable, distracting surveillance devices. We need to understand how being connected changes how the car operates and grows - and also ushers in problems we don't typically think about in a car showroom.

Anyone who's grown up with a smartphone would likely think the Model 3 is just how a car is supposed to work. When you receive one, the first thing you do is log into the Tesla app on your phone, which serves as a key to unlock and lock the car by proximity. I never got used to parking and just walking away from the car without keys - but that's the idea.

Inside, the touchscreen takes over. Behind the steering column, there's no dashboard. Instead, in the middle there's that DashPad - a floating 15.4-inch screen that contains everything from your speed and wiper indicators to air conditioning controls and a large interactive map. There's also a spot to name your Tesla. I dubbed The Post's loaner Democracy!

There are still two small buttons on the wheel, a turn signal and a gear shift, but otherwise that touchscreen is in charge. What's so great about touchscreens? From an engineer's perspective, they're nothing but possibility. Adding many new capabilities requires only a software update - no waiting for next year's model. That applies to fixing problems, too: Tesla already swapped the location of the phone and music player with defrost, so they'd be closer to the driver. The screen is a bridge to a future when the car is more autonomous and drivers and passengers might want access to very different information.

Software patches can also improve the car itself without requiring a visit to the shop. After Consumer Reports found "big flaws" with the brakes on the Model 3, Tesla made an over-the-air update that improved the Model 3's braking distance by almost 20 feet. The promise is, like your phone, your Model 3 will get better with age - including, some day, being capable of being fully self-driving. 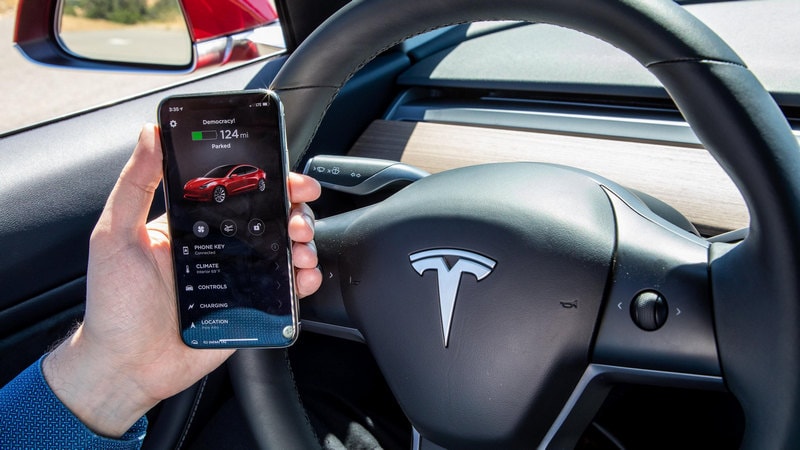 Your phone doubles as a key to unlock the Model 3 door, and even summon the car to you out of a tight parking spot.
Photo Credit: Washington Post photo by Jhaan Elker

Connectivity makes lots of other parts work better, too. You can summon it out of a tight parking spot like KITT on Knight Rider. Tesla says 90 percent of issues with its cars can be identified and diagnosed remotely, before taking it to a service centre.

Even the Model 3's charging port is connected. When I needed to charge up Democracy! (sorry, I couldn't resist), I drove to a Tesla Supercharger station, plugged in, and it already knew who I was and how to pay for the juice.

Smartphones are literally life-changing, but they have big problems too. And they get amplified in a car.

That starts with distraction. Driving with this middle-fixed DashPad was, at times, unnerving - the speedometer is just at the edge of my right peripheral vision. There's also a learning curve: I eventually figured out the volume controls (in addition to the screen, they map to one of the unlabeled buttons on the wheel), but never mastered the maps interface. Important things, like adjusting your side mirrors, are buried in the screen. Even opening the glove compartment requires a few taps. (There's no physical handle.) 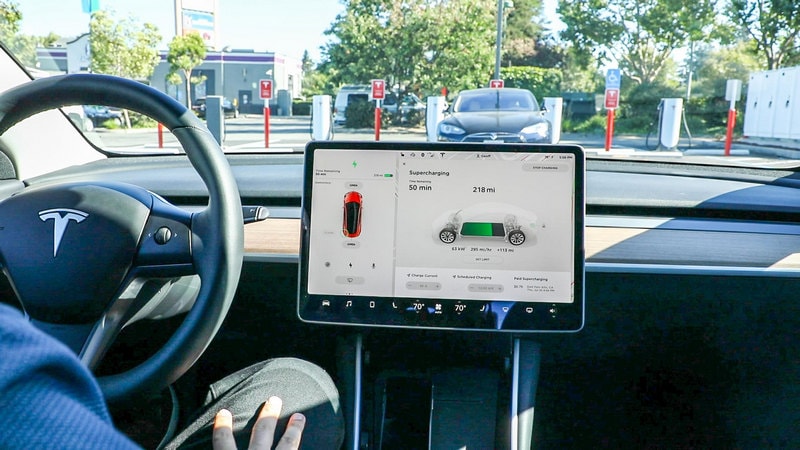 Inside the Tesla Model 3, the dashboard is mostly contained in a touchscreen in the center of the front console.
Photo Credit: Washington Post photo by Jhaan Elker

Until this car is fully self-driving, there's a hidden cost to touchscreens for drivers: you almost always have to look at the screen for a moment. Brains do better with physical buttons that build muscle memory. The Model 3's voice commands help limit screen distractions, but they're currently limited to a fraction of what you might want to do (just navigation, music player, and phone calls).

Psychology researchers from the University of Utah, working with the AAA Foundation for Traffic Safety, last year found most touchscreen infotainment systems are so distracting they shouldn't even be on while people are driving. Rating different vehicles, they said the systems in the Tesla Model S (a predecessor) were "very highly demanding" on drivers. They haven't rated the Model 3 yet.

The National Highway Traffic Safety Administration has a set of voluntary safety guidelines for in-car distraction. The Model 3 complies with part of those guidelines: There are no text messages or updates on the big screen, nor are there any current plans for an app store, Tesla says. But the navigation system does allow you type into it while the car is in motion, against NHTSA guidelines.

Then this week Musk tweeted he wants to hire video game developers "to make super fun games that integrate the centre touchscreen." Yikes.

As for being connected, those features all require service to work, which after the first year will cost around $100 per year for all the bells and whistles. And of course, you have to be in an area with coverage. A few times, I wasn't able to search for my next destination on the map and use other app features. Tesla says all core functions of the car will always work.

Then there are privacy questions: The cameras surrounding the car help Tesla build self-driving capabilities, but who exactly gets to look at that data? Musk has tweeted about the potential of turning them into a dash cam. The Model 3's privacy settings permit the company to collect video snippets, as well as "road segment data" (portions of trips taken by the vehicle). You can choose to opt out, but it is allowed by default. Tesla says it collects this data in an anonymised way so the it can't be used to figure out where an individual has been, and provides no customer data to advertisers.

As for software updates: The one I witnessed went fine, but even Apple has managed to brick a bunch of iPhones with a botched new version of iOS. Tesla gives you the choice to decline updates, but warns doing so could negatively impact your experience.

Last but not least, anything with software can be hacked. Until now, most vehicles kept infotainment systems entirely separate from core car functions, but Tesla doesn't by design. Its vehicles have been breached by researchers, including one Chinese group that made them dance. None of that has hurt regular Tesla owners that we know of. Musk has said hacking is a major concern, particularly in the case of a fleetwide attack - and Tesla has a bug bounty program to pay hackers for finding problems.

To date, Teslas have mostly been bought by enthusiasts, who tolerate design flaws, spend hours learning about their vehicles - and don't take well to critiques. They're like the first adopters who bought that original iPhone.

But the Model 3 aspires to move into a mass market that won't be as forgiving. Most people see software updates as an annoyance, not a reason to celebrate. Tesla's mind-set can't be: Oh, you'll find everything in the menus if you just tap around enough. It also can't be: Oh, none of that will matter when this car someday drives itself.

Tesla clearly sweats details, and its answers to many of my questions were superior to other connected device makers'. I applaud that. There's just a lot more at stake in a connected gadget that weighs 3,800 pounds and goes from zero to 60 in 3.5 seconds.

My buddy says he's happy with his Model 3, but after three weeks he's still unearthing how to operate it. He says it feels like he's levelling up in a video game. He'd think twice about getting a Model 3 for his wife, who unlike him isn't a Silicon Valley engineer. I agree for my family: Tesla's mass-market car is still for early adopters.

What Tesla's got going for it is that it listens to its customers, and has an unprecedented ability to make changes even after it's sold a car. It could learn a lot from Apple, which has not only found ways to bring once-complicated tech to very broad audiences, but also clearly communicates how it's dealing with issues like privacy and security. Maybe Tesla needs Genius Bars where you can drive up and ... learn how to drive.

Tesla will also need restraint to keep the focus on simplicity and safety, even if that goes against Musk's instinct to make the car into one big DashPad video game.