Robot Delivery Vans May Hit the Streets Before Self-Driving Cars 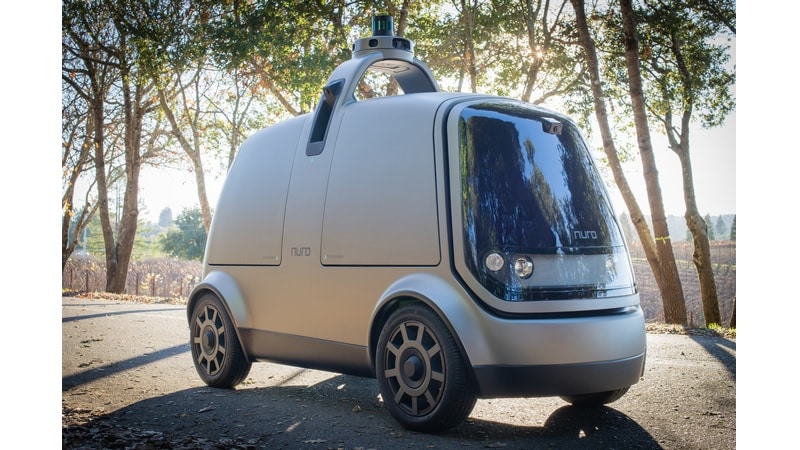 The future of driverless driving looks like a giant toaster with a funny hat.

That's an approximation of a new autonomous vehicle unveiled last week by Nuro, a Silicon Valley startup that's been cryptic about its business plan since it launched about 18 months ago. Nuro's shiny, minimalist appliance on wheels doesn't have doors or windows to speak of, because it will be carrying packages-not people.

As every major automaker and dozens of tech companies race to replace drivers in Uber cars and taxi fleets, Nuro is ignoring humans altogether and steering for Amazon.com, United Parcel Service and any retailer looking to build its e-commerce business. "We realised we could make it possible to deliver anything, anytime, anywhere," said co-founder Dave Ferguson. "We like to call it a local teleportation service."

Nuro's delivery pod weighs about 1,500 pounds, with most of that mass packed into a battery pack that powers its electric motor. It's roughly the same length and height as a conventional SUV, but only 3.5 feet wide. There is a glass windshield, mostly just to keep other drivers from freaking out.

Each will come with a modular, customisable interior that can carry about 250 pounds. A grocer will be able to opt for shelves and refrigeration; a dry-cleaner can go with hanging racks; while peer-to-peer versions shuffling the detritus of Craigslist may have two empty cargo bays with some anchoring straps. "We spent a bunch of time doing ergonomic experiments," Ferguson said.

Along the spectrum of self-driving technology, Nuro's cargo vehicle falls somewhere between a car from the "The Jetsons" and one of those smart suitcases that follow travellers around the airport.

To be sure, the market is massive. UPS alone delivers about 19 million packages a day. Excluding management and pilots, it employs roughly 353,000 people and spends 57 cents of every sales dollar on compensation and benefits. Robot-cars, meanwhile, are far easier to negotiate with at review time and ask only for some electricity.

Of course, Nuro isn't the first company to notice the Amazon Prime packages piling up on porches. Ford began testing human-free pizza delivery with Domino's last summer. Toyota rolled out a delivery vehicle in Las Vegas this month. Dubbed e-Palette, the futuristic van already has partnerships with Amazon.com and Pizza Hut. Renault-Nissan plans to unveil a driverless delivery van in September. Udelv, a self-driving startup, is testing an autonomous delivery vehicle in California this month.

However, Nuro, by all accounts a scrappy newcomer, has some street cred. Co-founders Jiajun Zhu (who goes by "Jay-Z") was one of the first engineers working on Waymo, the self-driving unit launched by Google (now Alphabet) Ferguson, who has a PhD in robotics from Carnegie Mellon, joined him there in 2011.

Since leaving Waymo, the pair has rounded up $92 million (roughly Rs. ) of venture capital over two rounds led by Banyan Capital and Greylock Partners. The company's most critical asset, however, may be its staff. It's lured dozens of workers from Bay Area giants, including Apple, Google, Tesla and Uber. And it's given them a relatively uncomplicated mission: Don't worry about passengers.

The Nuro vehicle, compared with similar robot cars, is skinny and slow, both of which make it relatively safe. It can avoid an errant child, for example, without leaving its lane. Meanwhile, it's in no particular rush. "Most of these things sort of drive like my grandma," Ferguson said. "If someone's inside the vehicle, that's annoying. If no one's inside the vehicle, that's actually a strictly positive thing."

As such, Nuro believes cargo vehicles have a clearer, quicker path to profit than the 30 or so outfits that incorporate sentient beings who must emerge unscathed. "Passenger self-driving, to (these companies), is an existential threat; they have to get it right," Ferguson said. "Whereas, for us, there are just some things we don't need to worry about."

Alexander Hars, managing director at Inventivio, a German self-driving consultancy, expects the number of players in the self-driving space to peak soon and then shrink quickly. The network effects enjoyed by the first movers will make it tough for the rest of the field to catch up.

"I think it will shake out very quickly," Hars explained. "The manufacturing is an essential part."

This is where Nuro may be trailing General Motors, Tesla and others. While its nifty vehicle seems to be in the vanguard, Nuro has yet to ink agreements with manufacturing partners-or customers, for that matter, though the company said it's in talks with a few major retailers. Its mission, for the time being, is to get its vehicles on US roads sometime this year, performing some kind of "useful service."

"It's ambitious," Ferguson said with a laugh. "We're uncomfortably excited about that goal." There is one downside about delivery vehicles without drivers, though: You'll have to go outside to get your stuff. While the tricky, so-called last-mile of delivery may soon be solved by the likes of Nuro, that last-50-feet will require better robots.