When you think of the electric cars, Tesla is perhaps the name that first comes to your mind. For all its technical achievements, the Elon Musk-backed company has also done a great job of marketing and made itself synonymous with the electric cars industry. But as industry observers know, if there's one car that's come close to matching - and at times exceeding - Tesla's success, it's the Nissan Leaf.

The Nissan Leaf was the world's best selling electric car for a couple of years, and at other times was not too far behind Tesla's offerings. While Tesla is the upstart that has shaken up multiple industries, Nissan, of course, is among the incumbents in one of the biggest industries in the world. The automaker invited Gadgets 360 to its headquarters in Yokohama, Japan earlier this year, and we got an opportunity to pick the brains of some of the company executives to understand the company's vision for the future of mobility.

We touched upon a wide range of topics, from autonomous driving - and the role Nissan will play in its evolution - to clean energy, and the company's beliefs that vehicle-to-grid might be a huge opportunity for automakers and consumers alike.

What is vehicle-to-grid?
If you've heard anything about electric cars, you've obviously realised that they need to be charged regularly, often at night, when the car is standing idle in the garage. With vehicle-to-grid, automakers want to make the relationship between the cars and the grid a lot more involved, starting with how the cars might want to give back to the grid.

Daniele Schillaci, EVP, Nissan explains. "The EV [Electric Vehicle] technology is changing also the cost of ownership for the customer," says Schillaci. "Because today, when you have normal technology - gasoline or diesel - your car in the night, is stuck on the garage, you cannot use it, it's a fixed cost. The EV technology - thanks to the vehicle-to-home - means the car, even when you don't use it, it becomes a variable cost. Because during the night, your house charges the car because the electricity fee is very low during the night. And during the day, your car can charge your house, when the electricity fee is higher." 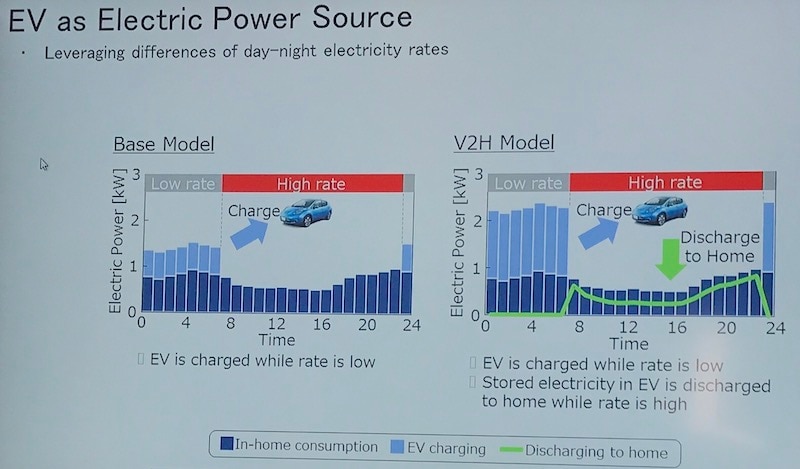 "You use the power of your car to power your house," says Roel De Vries, Corporate Vice President, Global Marketing and Brand Strategy at Nissan. "So a lot of people underestimate how powerful that is. Because one of the [challenges with] renewable energy is not so much the generation, but the storage. What do we do with all this electrical energy?"

"If you look at [Nissan] Leaf today, you can use the battery of the Leaf to power many things. You take this to the future [and] you're gonna have, hundreds of thousands - millions - of electric vehicles all over the world," De Vries explains. "All with an enormous capacity of electric charging. You can charge vehicles at the times of the day when it's cheaper or when the need for the electricity is less. And you can utilise those vehicles to power houses or to power houses."

We experienced a live demo of this at a race track on the outskirts of Tokyo, where a meeting room - complete with television sets, music systems, lights, and even electric barbecues - is powered entirely by the batteries of two Nissan electric cars. 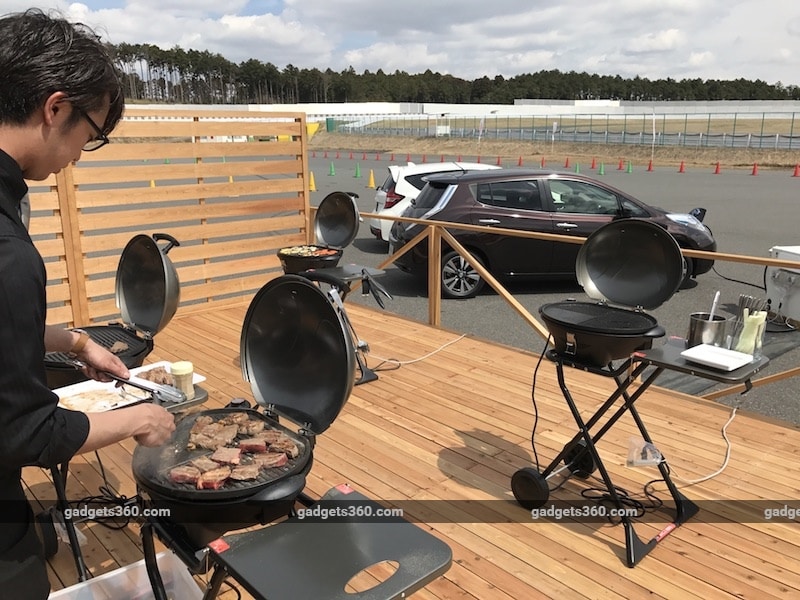 "The car is moving from a fixed cost when you don't use it, to almost a permanent variable cost, which is fantastic for [the] customer," Schillaci adds.

Autonomous driving and ride sharing
The focus shifts to autonomous driving and Nissan explains that its vision is not to replace the human drivers - not yet anyway - but provide aids that will help their cause of mobility. The company's ProPilot technology is already capable of keeping a car in a particular lane without any human intervention, and can even slow down/ accelerate the car as conditions in front of it change - features we see fellow journalists test out while driving a Nissan Serena on the roads of Tokyo.

If you think about it, autonomous driving is nothing but an evolution of assisted driving that started back in the day with technologies like ABS and cruise control. Most modern-day cars incorporate one or more of these technologies, and Nissan has proven itself to be ahead of the curve when it comes to embracing technology.

Nissan says it wants to launch multi-lane ProPilot next year, and aims to release a version capable of handling the car autonomously in city conditions by 2020. The company says full autonomous driving will be achieved sometime in the 2020s. 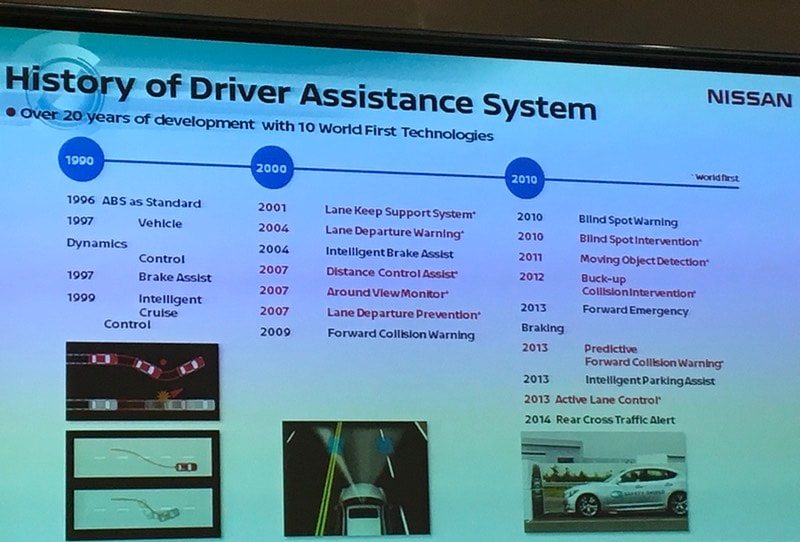 Companies like Uber are at the intersection of mobile and technology, and even pure tech companies like Google, Apple, and Microsoft are said - or in some cases confirmed - to have mobility plays of their own. We asked Nissan if it sees tech companies as competitors or potential partners.

"They are competitors and partners - both," says Kazuhiro Doi, Alliance Global Director, Nissan. "Because the business domain is slightly different. They are more like mobility providers, but our first purpose is to sell the car. In that sense, we can sell our car to them and they can buy our car to combine their technologies. And of course we can provide them complete solutions."

"But the reason why I said competitors is that we also have a possibility to provide a mobility [solution] for the future," Doi explains. "Right now, the majority of [our] business is selling the car. But the customer is moving more and more to car sharing and such kind of mobility services." If this trend continues, the two paths are bound to collide, Doi adds.

So does one imagine a future where Nissan plays a big role in the mobility market?

"We monitor [how] car sharing [is evolving] but we don't see car sharing as one of the very major pillars of our strategy," says Schillaci, "We follow what's happening, we are having experiencing and some tests here and there, but car sharing is not 100 percent highest [priority] in our company."

"The highest [priority] in our company is clearly the electrification, the implementation of new technology that makes the customer life better, easy, and to contribute to a better world. Which is what we call Nissan Intelligent Mobility."

"With Leaf, we are in the business of transporting batteries" - that might be an internal joke at the company, but its significance will be felt by a majority of us in the years to come.

Disclosure: Nissan sponsored the correspondent's flights and hotel for the event in Japan.

Can Your Car Power Your Home? Nissan Thinks So
Comment