The Telecom Regulatory Authority of India (Trai) released its draft consultation paper on the regulatory framework for over the top (OTT) services last week. There are several issues with this paper ranging from language that hides its meaning, cherry picking examples of net neutrality while ignoring those that don't agree with its decisions proposals, and drawing inferences about losses to telecom providers without real justification.

The problem is that the term OTT, as defined in the paper, is far reaching and refers to all apps and services you can access online - from Gmail, to Facebook, to news websites like NDTV.com or even apps like Uber or Foodpanda.

The issue goes beyond simply net neutrality, though that is an important one for all Indians. However, Trai's guidelines go well beyond the telecom industry, and start to look at things like health, social sentiment, and the concerns of brick and mortar businesses. This does not really seem relevant in a paper that is meant to understand the impact of Internet businesses on telecom providers.

You can read the consultation paper yourself on the Trai website. The regulator is seeking the views of all stakeholders by April 24 - that includes consumers like you and me - and we would strongly urge our readers to go read this article and then send your comments to advqos@trai.gov.in to let your government know what you want from it.

We read through the complicated 118 page document and while we certainly won't call ourselves experts on the subject, there are some passages that seemed particularly worrying, and didn't seem to belong in this discussion at all. We already highlighted the biggest telecom related issues in the paper, but here are some of the passages from the draft that seem completely tangential.

The argument that Internet services disrupt brick and mortar businesses, and therefore need to be regulated by Trai seems pretty random. That online businesses are disrupting traditional models is clear. Discounts have reportedly cost e-commerce sites around Rs. 1,000 crore in losses and this behaviour appears in many ways anti-competitive.

However, these are questions that have little to do with telecom, which is Trai's mandate, and don't belong in this paper. An app shouldn't require a green-light from Trai before it can be distributed in India. 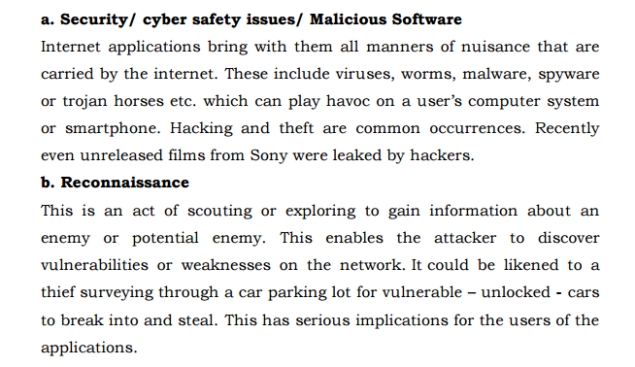 Trai also raises the dreaded spectre of hacking - and describes the Internet as a car parking lot that a thief is prowling through - this kind of alarmist language is misleading, and perhaps even more importantly, simply allowing people to access apps and websites can't be blamed for these things. Unless the Trai is suggesting some sort of a safety net, the overall implication of these two points is that we should just not have Internet access in India. 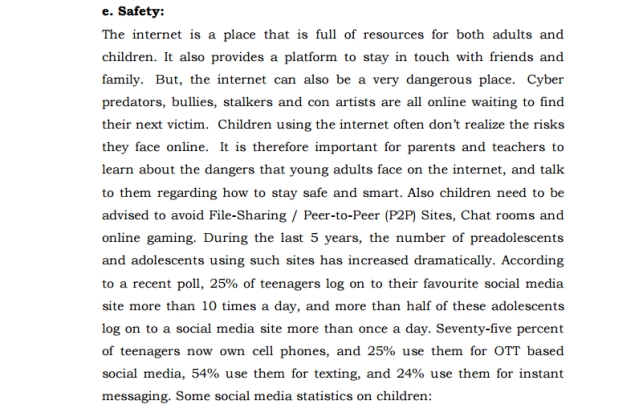 Apart from thieves in parking lots, predators, stalkers, bullies and con artists fill the Internet in Trai's eyes. Children need to avoid file sharing, chat rooms, and online gaming. You can almost imagine someone saying: "When we were kids we didn't have any of this Internet stuff. If you wanted to play, you went outside and had fun."

Cyberbullying and (gasp!) "sexting" (their quotation marks, not ours) are the scary phrases of the day, that are apparently made possible by OTTs. Of course, you could argue that it's the prevalence of smartphones that has caused this in the first place, so perhaps Trai can issue a mobile license, which will be required to operate a smartphone, much like a driving license. 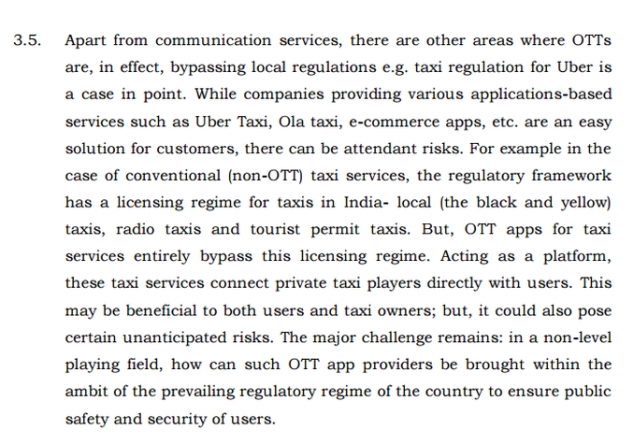 (Also see: Why It Is a Mistake to Think of Uber as a Technology Company)

This seems to be an issue for the Transport department - which is in fact already looking into taxi apps - and not Trai. 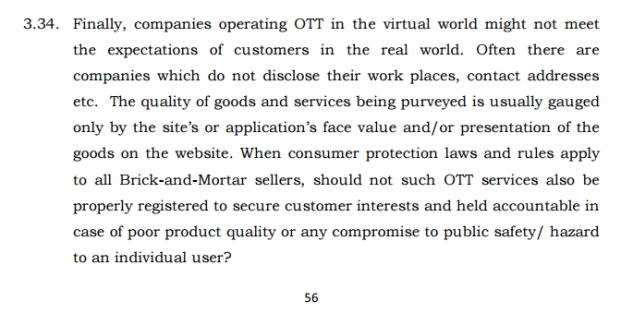 Trai also seems to believe that consumer protection laws do not apply to e-commerce websites, which is quite strange. If a site is the seller, why can't you name it as the respondent in case of any issues? And in the case of a marketplace model, the seller is still made clear, and contactable, when you make a purchase. The laws of the land shouldn't cease to exist simply because something is online, and you shouldn't require special laws for the Internet, as was proved by the Supreme Court of India recently.

(Also see: Bringing Freedom to the Internet in India) 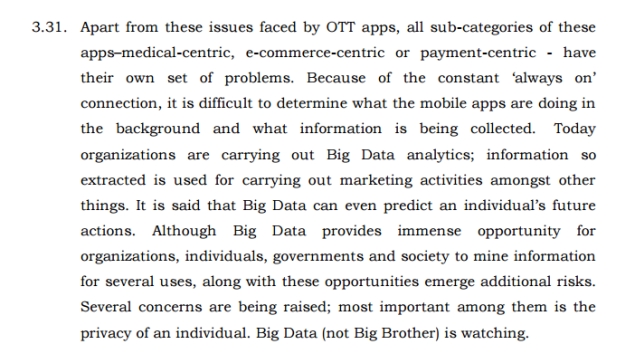 It is also quite interesting that while Trai in other parts of this document complains that OTT services make it hard for the government to access your data, in this point, it goes so far as to say that Big Data (not Big Brother) is watching. The use of term 'Big Data' aside, this is actually a point we are in agreement with Trai - not that OTTs shouldn't collect data, but the government should have some provisions guaranteeing the privacy of citizens. The catch is that this should be universal, and not something that the government can violate on whim. 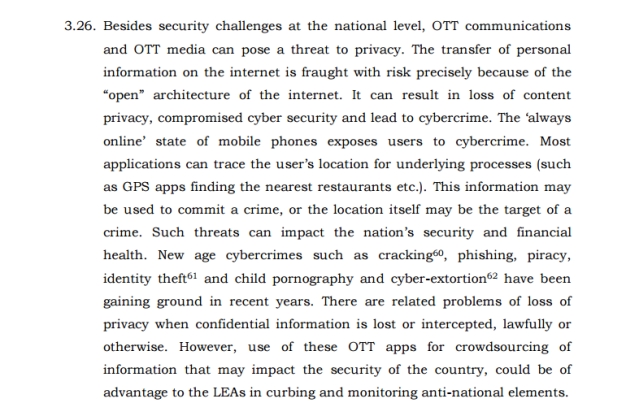 Here, we see Trai worrying that tech-savvy thieves will use your GPS information to rob your house while you're out. As you can see though, the regulator is a little conflicted because it says that these apps could be useful for law enforcement. These are actual concerns that need to be debated, but again, Trai does not seem to be the ideal forum to debate issues of national security. 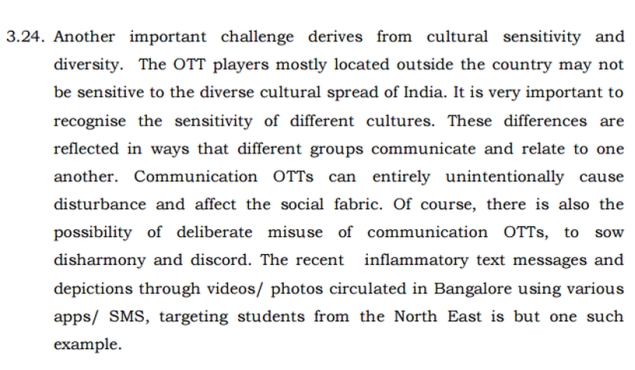 Cultural sensitivity is a bogey that is raised fairly often in Trai's draft consultation paper. Here, the regulator talks about how social media was used to send inflammatory photos targeting students from the North East in 2012. This is problematic because Trai seems to be suggesting that we should not have the option to communicate quickly on social platforms that allow messages to disseminate quickly, in the name of cultural sensitivity. In a paper whose main thrust is that OTTs are hurting telco revenues, this feels like an emotional point being scored that isn't really relevant to the key argument in the first place.

These are just a few samples of how the Trai paper seems to want to focus on all issues that are not related to net neutrality and telecom. At a time when our providers use Fair Usage Policies to offer limited plans they call "Unlimited", where Airtel was considering special fees so that Skype calls aren't cheaper than voice calls, when billing is often erroneous, never transparent, and our call and data services are barely acceptable, it seems that Trai should be looking at what the telcos can do better, instead of helping them to do nothing new and still make more money.

Once again, please read the paper and write to Trai before April 24. It's for all of us.

Further reading: Internet, Internet Regulations, Net Neutrality, Telecom, Trai
Gopal Sathe Email Gopal
Gopal Sathe is the Editor of Gadgets 360. He has covered technology for 15 years. He has written about data use and privacy, and its use in politics. He has also written extensively about the latest devices, video games, and startups in India. Write to gopal@ndtv.com or get in touch on Twitter through his handle @gopalsathe with tips. More
Google Details Its Fight Against Ad Injectors
Final Fantasy Type-0 HD Review: Bad Looking, but Great to Play