A few days ago, the Telecom Regulatory Authority of India (Trai) released its consultation paper on the regulatory framework for over the top (OTT) services. This term - as defined in the paper - refers to all apps and services you can access online - from Gmail, to Facebook, to news websites like NDTV.com or even apps like Uber or Foodpanda.

This paper has major implications for all Indians; at a time when our lives are becoming increasingly digital, the guidelines laid out in this paper don't just affect a few tech-geeks. Amongst other things, the paper aims to address topics like net neutrality and whether telcos have the right to charge services like Skype and the recently unveiled WhatsApp voice calling differently compared to other data usage.

This is an important issue because companies like Airtel have shown that they want to charge extra money for access to services like Skype, because they compete with the company's own voice business. Instead of improving its own offering, telcos have the option of simply placing barriers to access the competition.

We have already seen Trai making pro-operator statements, and experts tell us that while the behaviour of companies like Airtel might be anti-competitive, the Competition Commission of India might not be in a position to intervene until the market effects are visible.

The idea behind net neutrality is an important one, and when the regulator seems to be listening to only one side of the debate - as suggested by its comments and some of the language of the paper - it is a serious concern. At least on paper, you have a chance to make your voice heard.

You can read the consultation paper yourself on the Trai website. The regulator is seeking the views of all stakeholders by April 24 - that includes consumers like you and me - and we would strongly urge our readers to go read this article and then send your comments to advqos@trai.gov.in to let your government know what you want from it.

The consultation paper is a long and honestly hard to follow document, but after having read through it a few times, there are a few things that we believe are important enough to be share with our readers - and with Trai. The most important fact is that the arguments made against the so-called OTT players in this paper are often without merit.

The paper gives examples of how OTT players are potentially harmful because of a lack of regulation, but these are either egregious; or Trai can't substantiate these ideas; or does so by picking the few examples that support its point while ignoring all other counter-examples. The entire document is also written in a manner that feels designed to obscure understanding, as you will see in some of the examples we highlight below. That's an issue in and of itself, considering that Trai is asking stakeholders to share their views, but the issues this confusing language tries to hide are even more worrying.

This - point 1.4 of the document - is the crux of the argument against OTTs, and the language makes it clear that while Trai is asking for opinions, its mind is already made up. In simply defining OTTs, Trai states that they make use of the telcos' infrastructure to make money and compete with telcos. This ignores the huge risks involved with online businesses, which the telcos have no role in; the challenge of building and sustaining a product, which the telcos have no role in; and ignores the fact that the telcos themselves did not take advantage of their infrastructure to provide users with the services they wanted.

In Chapter 2, Trai notes that the Cellular Operators Association of India (COAI) argues that OTT players offering Internet telephony without a telecom license are circumventing Indian law. However, as Trai itself notes, calling a phone from an app like Skype or Viber requires interconnecting with the telco, which earns money for the call. The other argument is that because these services are not regulated, they don't have to offer a minimum quality guarantee, or emergency calls.

While it's arguable whether our telcos are meeting any minimum quality, it's also important to note that these calling services do not replace traditional voice calling, particularly true in India, where simply moving a few steps in your house could mean that your cellular data gets disconnected. Therefore, these issues don't really come into play, as voice calling remains the best way to actually speak to someone.

What is interesting though about the COAI's argument is that both Google and Facebook are a part of the association. Google's Hangouts and Facebook's Messenger might both be negatively affected by the need for licensing - but these giant companies could push through the process. Smaller firms would have a harder time of it, and this could help protect these global giants from Indian disruption.

Here, Trai points out that SMS revenues for GSM operators has gone down approximately 2 percent, between December 2012 and December 2013. CDMA operators saw a drop of 0.14 percent in the same time, and cost the industry up to Rs. 4,000 crore. This would be impressive proof of the harm the OTTs are doing to the industry, but again, it ignores quite a few things.

For one, it doesn't really explore "missed call" services like ZipDial. Earlier, companies were using SMS - often chargeable at a premium to customers - to communicate with their users, but many switched to a missed call model because the public was more likely to respond. Companies have also gotten better at communicating through their websites and social media. You can even talk to your telco on Twitter if you've got a billing issue, though the effectiveness of their responses is quite questionable.

Messaging software is definitely also having an impact, but it is far from the only reason why SMS is losing popularity - the service itself is limited, and offers a compromised experience compared to chat apps, so why should people use it? 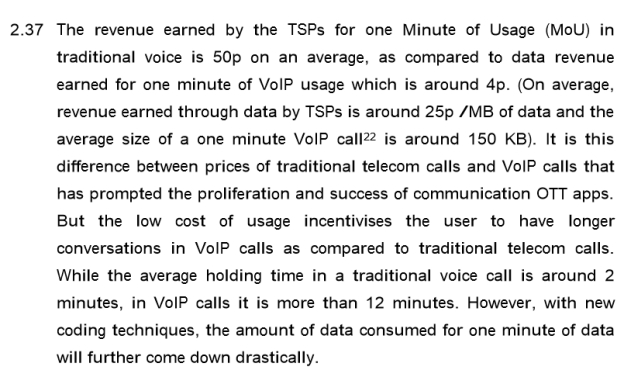 We did some testing, and found that WhatsApp voice calling used approximately 500KB, and Hangouts used approximately 600KB. With these numbers, the gap between voice and data revenue is a lot smaller, and more importantly, a voice calling service can also be a gateway to the Internet, and can prompt people to use more data, resulting in more revenues for the telcos. 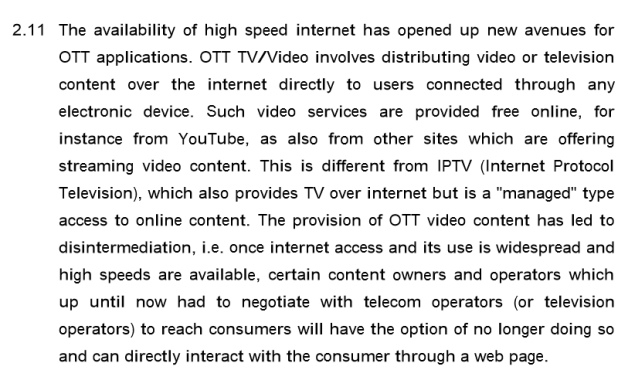 Trai notes that OTT video services hurt telecom provider offerings. This would be more relevant if it wasn't for the fact that for years, Indian telcos were happy to focus on the "ABC" of Astrology, Bollywood and Cricket. User generated wasn't possible, and only the safest, most mainstream content would ever be promoted.

But the last sentence of this point is perhaps the most amazing.

Once internet access and its use is widespread and high speeds are available, certain content owners and operators which up until now had to negotiate with telecom operators (or television operators) to reach consumers will have the option of no longer doing so and can directly interact with the consumer through a web page.

In other words, Trai also recognises that the telcos were not incentivised to compete for consumer interest because there were no alternatives, and wants those 'glory days' back.

Here, what's amazing is that Trai seems to be blaming websites and apps for being hacked or attacked in other ways. In part C it talks about how people can use denial of service attacks to shut down a site - which is apparently the site's fault, since there is no obligation to ensure availability of service.

In Chapter 4 point 13, Trai notes how Korean telcos are working to combat messaging apps by building a better SMS service. However, in 4.14 it instead flags how tiered services in the UK allow telcos to keep their money safe without making all that awful effort.

In the next few points, Trai gives examples from other countries as well to support the need for regulating OTTs. Considering that international examples are being used as guidelines, it's interesting that Norway is not mentioned, since it is one of the most prominent pro-Net neutrality states in the world. While the US FCC rules are mentioned, which classify broadband as a public utility, Trai quickly notes that this is just a draft, and adds that the draft rules have already opened the doors to litigation. 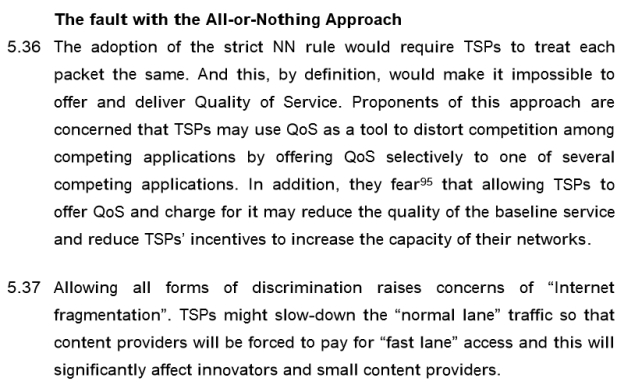 There are many questions that can be raised by Trai's take on network neutrality, but that's a subject that would take even longer to discuss. However, the basic tenets of net neutrality are essentially pro-customer, and Trai seems to support this with a few exceptions. As the text above shows, Trai wants to try and find a middle ground on network neutrality - this is a little worrying considering the rest of the Trai draft, which shows a definite pro-telco slant.

These are just some of the issues raised by our reading of Trai's paper. Confusing language is present throughout the document, and there are constant references to issues that seem completely out of place and unrelated to the telecom industry, such as health, cyberbullying, and social responsibility. While there are some places where Trai seems to take note of the problems with tiered pricing, FUPs and the difficulties involved in regulating all apps and websites available in India, these are few and far between. Take a look at your phone right now. Look at how many apps you have installed. Taken as a whole, the Trai paper is suggesting that each and every one of these needs to get a license to be used in India. That's how this document affects you, so read the paper and write to Trai before April 24.

Further reading: Apps, Internet, Net Neutrality, OTT, Telecom, Trai
Gopal Sathe Email Gopal
Gopal Sathe is the Editor of Gadgets 360. He has covered technology for 15 years. He has written about data use and privacy, and its use in politics. He has also written extensively about the latest devices, video games, and startups in India. Write to gopal@ndtv.com or get in touch on Twitter through his handle @gopalsathe with tips. More
Samsung Galaxy Alpha to Also Receive Android 5.0 Lollipop Update
InFocus M2 Review: How Low Can Smartphone Prices Go?