Reliance Jio, which began a major tariff war after entering in September, has once again outpaced its competitors in 4G speeds for the month of March. According to the latest data collected by TRAI’s MySpeed app, Jio led the market in 4G download speeds and has also improved on upload speeds.

TRAI’s MySpeed app registered an average 4G download speed of 16.48Mbps for Reliance Jio, which is almost twice the speed its closest rivals offered in the month of March. Airtel and Idea Cellular registered 4G download speeds of 10.439Mbps and 12.029Mbps, respectively, both of which see a drop from February data where Airtel averaged 11.245Mbps and Idea 12.216Mbps.

Talking about Jio, the March speed, while way over its competitors, still shows a month-on-month dip. In February, Jio peaked at 17.427Mbps, while in December it had reached its highest mark at 18.146Mbps. With Jio’s subscriber base well over a 100 million and counting, we could see the average speeds dip further as the months progress. 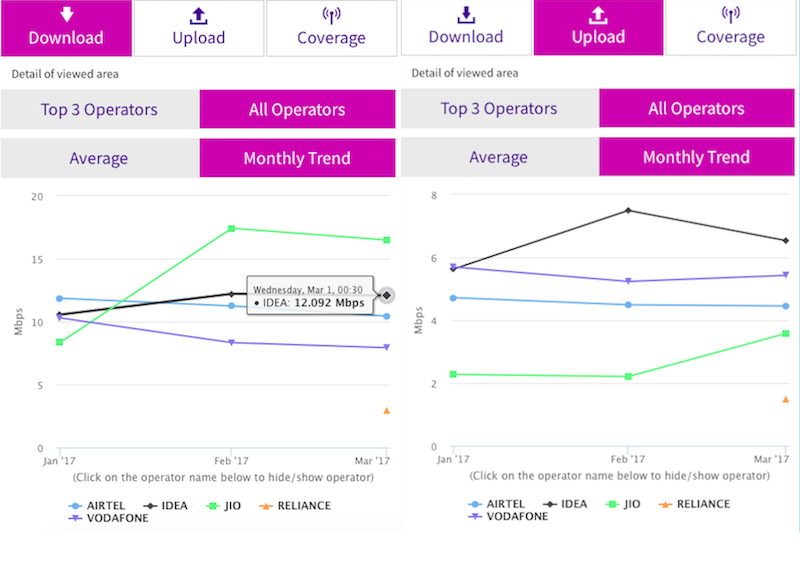 Interestingly, Reliance Jio has improved when it comes to upload speeds, registering an average 4G upload speed of 3.581Mbps for the month of March, which is up from 2.208Mbps from February’s data. Airtel has been relatively stable at 4.455Mbps. Vodafone picked up marginally from February where it registered 5.236Mbps to 5.429Mbps in March.

Idea, meanwhile, saw a fall in average 4G upload speeds. After leading the market in February with 7.497Mbps, Idea registered an average speed of 6.536Mbps for March, but continues to take the top spot.

The telecom market at this point is highly volatile, with everyone trying to take on Jio’s low-cost plans and free voice calls. Airtel, Vodafone and Idea, among others have been aggressively pushing out newer and cheaper plans to try and lure customers. You can expect the data to fluctuate some more in the month of April.