Reliance Jio entered the market with the aim of democratising Internet access in India by offering a 4G-only network that caters to the masses courtesy low-cost plans. However, it turns out the Jio 4G network offers the slowest download speeds in the country among the top 5 telecom operators.

According to data by Telecom Regulatory Authority of India (Trai)'s recently-launched My Speed website, the average pan-India 4G download speed by Reliance Jio stands at 6.2Mbps, making it only the fifth-fastest network in the country. 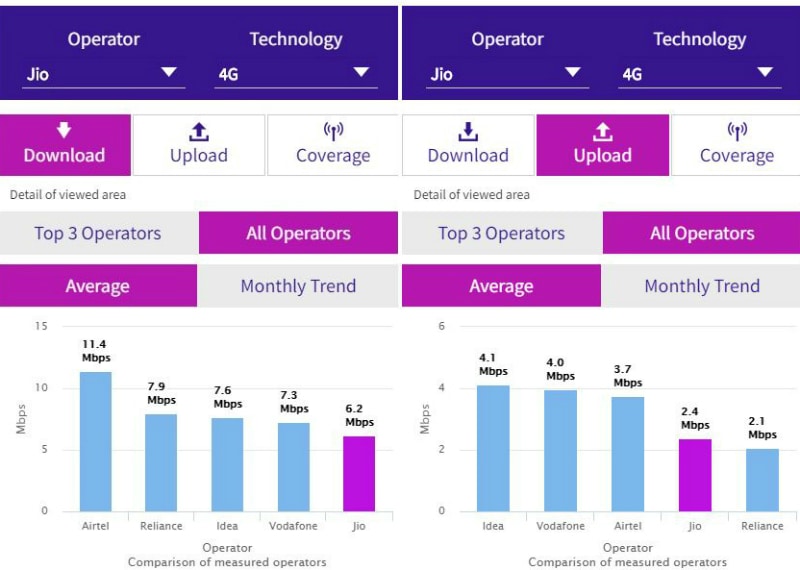 In Delhi circle, network's ranking on the same parameter rises to third, but the speed dips to 5.9Mbps. In Mumbai, a major telecom market, Reliance Jio's download speed goes up to 10.7Mbps and its position rises to second. In Karnataka circle - home to the lucrative Bengaluru market - Jio slips out of the top 5 entirely, despite an average download speed of 7.5Mbps. The website does not have sufficient data for the West Bengal circle.

Jio stands fourth in Delhi and Mumbai circles with average upload speeds of 2.3Mbps and 3Mbps, respectively. In Karnataka, users get 2.6Mbps upload speed on an average, while the network stands at sixth position. 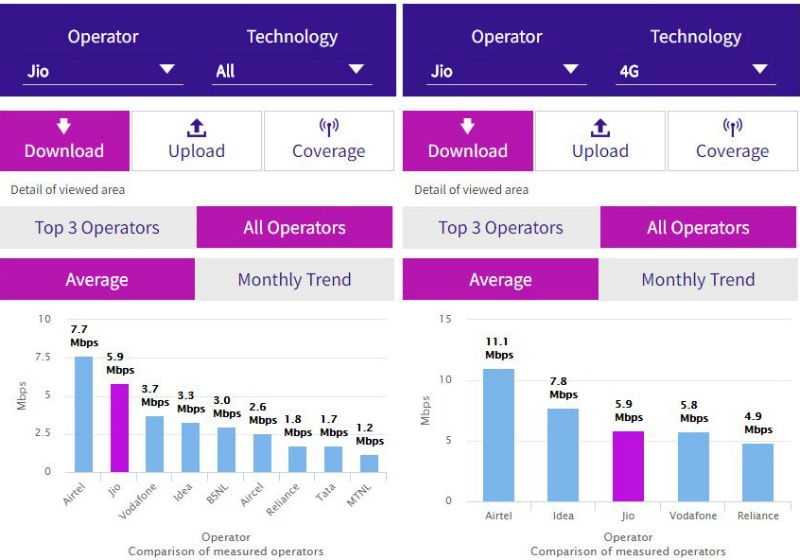 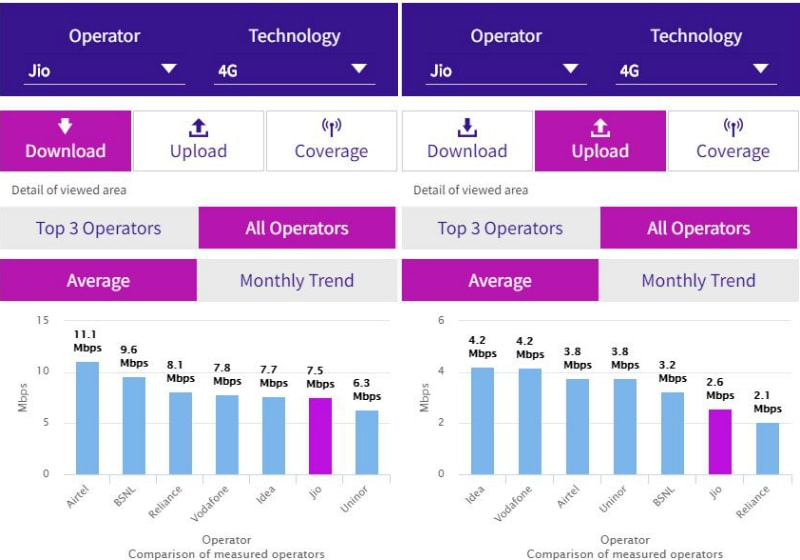 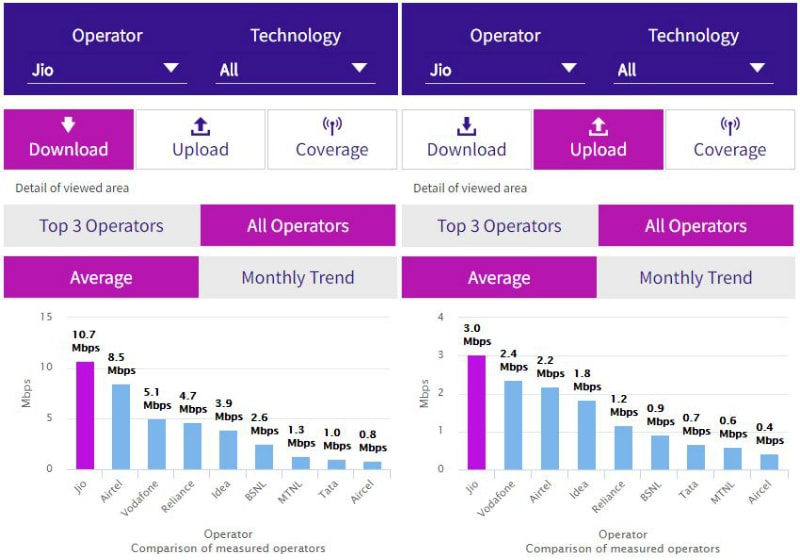 On the other hand, Reliance Jio's average download speed of 6.2Mbps still makes it the fastest network in the country if the 'Technology' on the Trai website is set to 'All', which includes 2G and 3G networks as well. Same is the case for upload speed, which is the fastest in the country at 2.4Mbps. This is likely because the Jio network is 4G-only, while other networks offer 2G and 3G data services as well where speeds tend to be much slower. 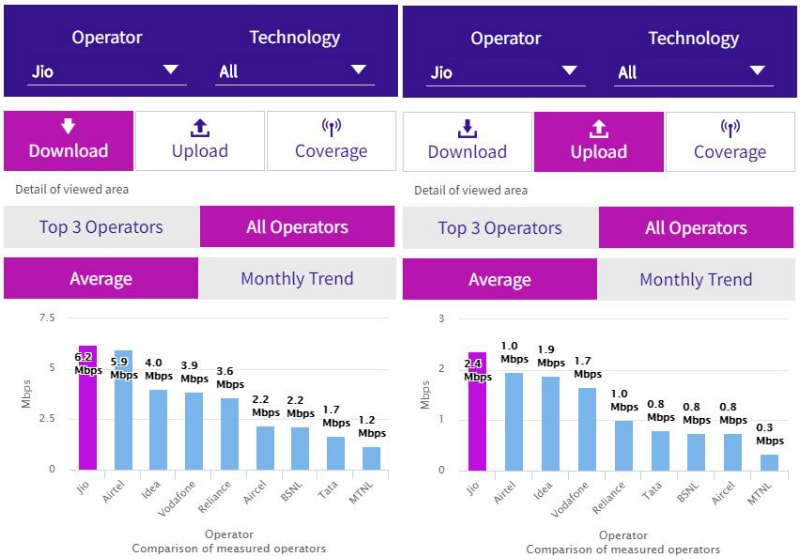 In a statement, Reliance Jio said that it has performed an internal analysis of its network and found that "the comparison of Jio speeds with other operators has an inherent bias against Jio data usage."

The company explains this "bias" by pointing out it has policy of giving users only 4GB of free data per day to users; those who exhaust the 4GB daily Fair Usage Policy (FUP) limit are limited to maximum speed of 256kbps and the speed is increased only after the 24-hour period is over. Therefore, the people who have used up 4GB of data and are on the slow network are said to be responsible for the low average Internet speed on the network.

Historically, we have observed that a disproportionate number of speed tests are performed once the FUP comes into effect. This is so since most users don't consider performing the test until they observe a deterioration of speed. Such users also tend to perform multiple tests until full speeds are restored.

Given that data usage under Jio Welcome Offer is completely free, a higher proportion of Jio users run up against the FUP limit. In comparison, not all non-Jio users have FUP based plans (rather their usage is completely stopped, and they are entirely prevented from performing the speed test), and even those who have FUP based plans face this situation only once a month. Further, such customers tend to recharge quickly and restore full speeds.

This difference in the offer structures, and associated customer behaviors, result in a large proportion of the speed tests being conducted on Jio network when the speeds are reduced via FUP to 256kbps. This has the effect of dragging the average far below the speeds experienced by Jio customers who are enjoying full 4G LTE speeds.

Having said that, we continuously measure the speeds experienced by Jio customers - adjusting for factors such as FUP, and are proactively working to improve service levels for all our customers.