India Found to Have Slowest 4G LTE Speeds in the World Again, by OpenSignal

The wireless coverage mapping experts over at UK-based OpenSignal recently released The State of LTE report for February 2018 where it highlighted availability and speeds of 4G LTE networks across several international markets including India. Following the November 2017 report released back in December last year, India's position in the 4G availability has since fallen and the country now ranks below Sweden and Taiwan. On the other hand, 4G speeds still remain dismal as India was once again ranked last in the list.

As we mentioned, the February 2018 report by OpenSignal highlights a number of key 4G LTE statistics for India as well as other global markets. In terms of availability of 4G signals, India was assigned the fourteenth position (down from eleventh in November 2017) with an increased 86.26 percent coverage of 4G. The growth is attributable mostly to the telecom boom after Reliance Jio jumped into the scene a couple of years back. El Salvador and Algeria were last on the list with 4G availability falling below 45 percent.

The 4G Speed Comparison chart was where India failed to perform yet again. With an average 4G LTE speed of 6.13Mbps, India was ranked last out of 77 countries on the list. Singapore came first with an impressive 4G speed of 46.64Mbps on average. However, India's dismal performance can be attributed to the millions of new users that came online due to the falling data rates in the country over the last few months.

"Meanwhile, the bottom ranks in our speed chart feature several countries with large populations - and therefore large mobile subscriber bases - that bring down the global 4G average. For instance, India and Indonesia both averaged 4G downloads below 10Mbps," the report read.

Tariffs in countries like Singapore and South Korea remain high, explaining the consistency of their high speed signals. Even nations including the US and the Russian Federation ranked low in terms of 4G speeds. 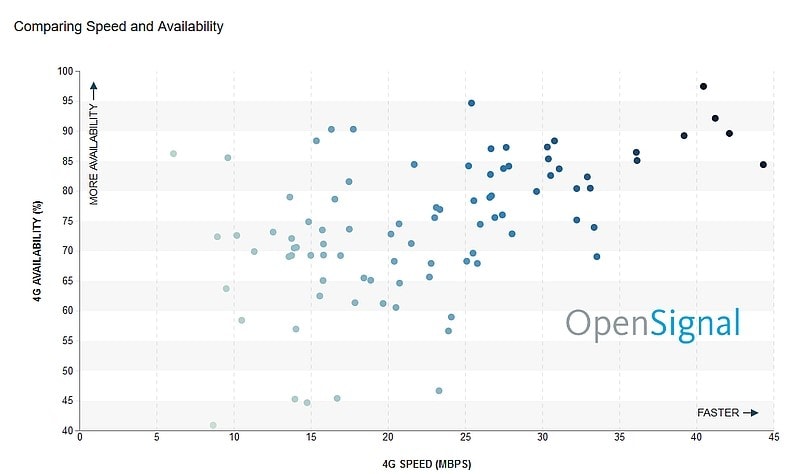 "In the upper left corner we find India and Thailand. Both countries provide far-reaching access to LTE signals, but in both cases their 4G networks lacked the capacity to deliver connection speeds much faster than 3G technologies," the report added.

In a report from last year, OpenSignal had considered "network congestion" as the main reason behind underperforming data speeds. While operators like Airtel, Idea, and Vodafone saw dwindling speeds, Reliance Jio benefited substantially in the November 2017 report.

India Found to Have Slowest 4G LTE Speeds in the World Again, by OpenSignal
Comment