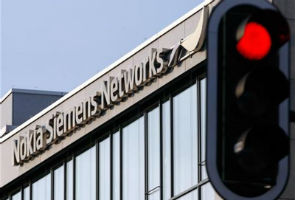 Nokia Siemens Networks expects to jump to second place in the global wireless network equipment market for the full year 2013, ahead of arch-rival Huawei Technologies Co, according to a top Nokia Siemens executive.

Nokia Siemens, a venture of Finland's Nokia Oyj and Germany's Siemens AG , trails Huawei in the global mobile network equipment market, which is led by Ericsson . The venture has had to undertake a massive restructuring this year as it struggled to make a profit due to customer consolidation and aggressive price competition.

But Nokia Siemens should be able to take the No. 2 position from China's Huawei and keep it next year, said Kenneth Wirth, the venture's head of customer operations for the Americas and an executive board member of Nokia Siemens, citing new contracts his company has won.

Huawei took second place from Nokia Siemens in 2010 and has held onto the position ever since, according to Dell'Oro.

However, Nokia Siemens has a long way to go to catch up with Huawei. According to statistics from research firm Dell'Oro, Huawei's market share was 22.3 percent in the second quarter, compared with the 18.1 percent share held by Nokia Siemens.

Market leader Ericsson has a 35.5 percent share, while Alcatel-Lucent has 14 percent.

Under the strain of tough competition from its bigger rivals and the need to rein in costs, Nokia Siemens had to lay off 10,000 workers in the space of six months, cutting its work force to 63,000 people. It has also been narrowing its business focus to its core business - network equipment for cellular networks.

It sold off its network equipment for wired networks and got out of the market for WiMax, a wireless technology that has garnered much less carrier support than LTE.

As a result, it has been generating cash and is now in better position to attract customers who now have more confidence in Nokia Siemens' future, Wi rth said.

"A year to a year and a half ago there were concerns about our long term viability," said Wirth.

He noted that the company has won business in Latin America, where demand is strong for high-speed wireless equipment. In the United States it is supplying Verizon Wireless, the biggest wireless operator, and T-Mobile USA, the No. 4 operator, with equipment for big network upgrade projects.

"The machine is really starting to hum," Wirth said.