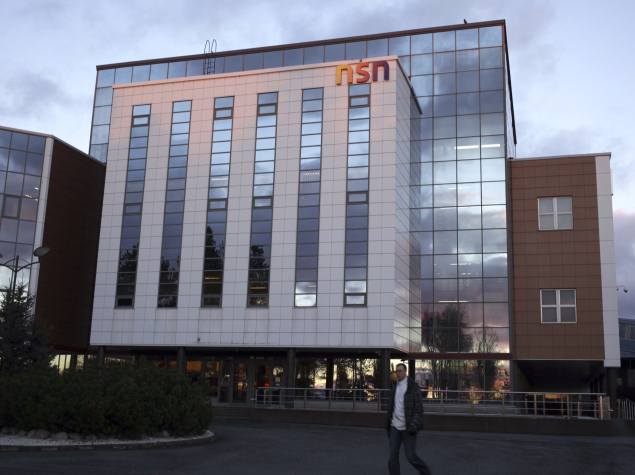 Nokia is expected to show a steep fall in network equipment sales in its results this week, highlighting the challenge facing management after selling its once mighty handset division to Microsoft for 5.4 billion euros.

Improved profitability at Nokia Solutions and Networks (NSN) due to cost cutting have helped cushioned the company's declining handset business in recent quarters.

But with major projects in South Korea and Japan coming to an end, the NSN business, the bulk of Nokia's entire business after the handsets sale, is expected to report a 19 percent fall in fourth-quarter sales to 3.2 billion euros and a 17 percent fall for the whole of 2013 to 11.4 billion euros. Results are due on Thursday.

The decline for NSN would follow a 26 percent fall in third-quarter sales and come as scale has become increasingly crucial to competing against the industry leader for wireless networks, Ericsson , and China's Huawei , particularly due to high research and development costs.

NSN's chief Rajeev Suri, in an interview with Reuters in November, confirmed the company was now prioritising revenue growth even if it meant a trade-off in profit.

Analysts said NSN must demonstrate that shift in coming quarters, and that markets will accept a dip in margins as long as they don't fall too far below 8 to 10 percent.

NSN's fourth-quarter adjusted operating margin is still likely to be high. The company forecast it will be around 12 percent, plus or minus 4 percentage points, compared with 8 percent in the third quarter.

That's higher than most rivals such as Ericsson, which reported an 8 percent operating margin last quarter as NSN's restructuring programme launched in late 2011 cut a quarter of its workforce and took the business out of low-margin projects.

"It is possible that we won't be seeing such high margins this year, but I'd rather see them starting to grow again," said Inderes Equity Research analyst Mikael Rautanen.

Nordea Markets analyst Sami Sarkamies said Nokia's challenge will be to find new businesses to make up for a decline in sales in Asia, where a year ago it was busy building out high-speed wireless broadband networks. Asia, including Greater China, accounted for around 41 percent ofNSN's 2.59 billion sales in the third quarter.

That won't be easy. While telecoms operators are expected to spend more on network equipment in 2014 due to strong demand for high-speed 4G mobile broadband technology, competition is set to remain fierce.

Analysts expect Nokia's results this week to also show a fall in its handset shipments. Quarterly smartphone shipments are expected to have risen 53 percent from a year earlier to 10.7 million while still lagging behind market leaders Samsung and Apple .

But results from the handset business, where revenues last year were estimated to have fallen by 26 percent to 11.6 billion euros, will be counted as discontinued operations, with the Microsoft deal expected to close shortly, pending regulatory approvals in China.

That leaves Nokia investors to focus on how Nokia will operate the rump business and how much of the sale proceeds will be reinvested or paid out to shareholders. Company sources said last week that the board was still finalising details of Nokia's new structure and leadership.

NSN's Suri is widely seen as a leading contender for the CEO role, with investors happy with his track record of having turned NSN around.

Some sources familiar with recent talks, however, said Nokia's CFO and interim president Timo Ihamuotila is also a top candidate, favoured by those who see a future in Nokia's HERE navigation software and its store of technology patents.

Those businesses will account for just 10 percent of the new company's sales, with the rest coming from NSN, but some believe they could be used to help turn Nokia into a patent powerhouse or develop wireless services of the future.

As CFO, Ihamuotila has gained experience in mergers and acquisitions, which could prove useful if Nokia decides to sell parts of the remaining business such as HERE.

Analysts, however, see the most likely deal for Nokia as a tie-up with struggling rival Alcatel Lucent. Suri played down the likelihood of such a deal in November, but analysts say it could help NSN compete more effectively against Ericsson as well as Chinese rivals Huawei and ZTE.

"Nokia clearly would have a great opportunity to improve NSN's position with the acquisition of Alcatel-Lucent's wireless division," Bernstein analyst Pierre Ferragu said in a research note.

'Smart' fridge among over 100,000 devices hacked to send out spam
US lawmaker investigates potential Russia connection of Snowden's leaks