After Kolkata, Punjab comes as second with a 4G availability score of 89.9 percent

Kolkata has emerged as the leading telecom circle in terms of 4G availability in India, OpenSignal said in a report on Thursday. It is claimed that among all India's 22 telecom circles in the country, Kolkata has led the race with a 4G availability score of 90.7 percent. The latest report, which is based on the data for all the 22 telecom circles in the 90 days from the start of May 2018, also highlights that all the other 21 circles saw 4G LTE coverage scores over 80 percent. While Kolkata tops the 4G coverage in the country, it comes at the third spot when it comes to speeds with an average 4G download speed of 8.46Mbps, as per a previous report by the UK-based data analytics company. In March, Navi Mumbai was found to be the top city in the country on the speed front with an average 4G speed of 8.72Mbps, followed by Chennai that saw its 4G speed reaching to 8.52Mbps from 4.4Mbps a year before.

OpenSignal says that Kolkata surfaced as the only circle in the country with a 4G coverage of over 90 percent. After Kolkata, the Punjab circle is next with 89.9 percent, followed by Bihar at 89.2 percent, Madhya Pradesh at 89.1 percent, and Orissa at 89 percent. "Many of the top telecom circles for 4G availability were in the East and North of the country, reflecting a similar trend in our analysis of LTE reach in India's cities six months ago. Indeed, the city of Kolkata was just outside top three in India's cities, coming fourth behind Patna, Kanpur, and Allahabad," the report said. 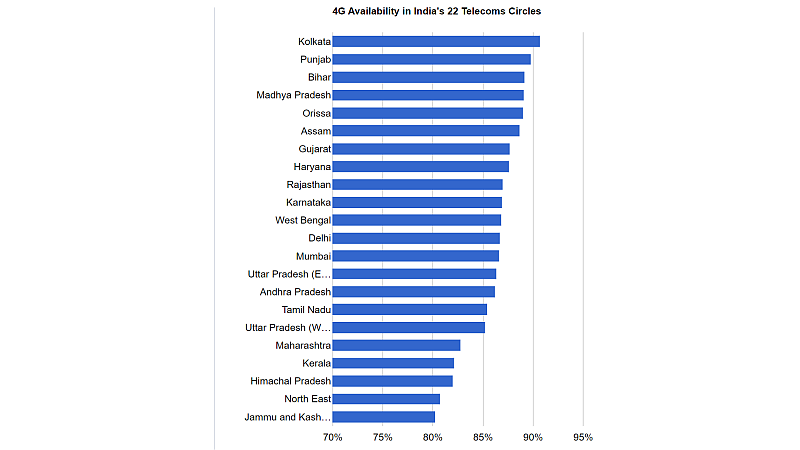 4G LTE availability between May and July 2018
Photo Credit: OpenSignal

Delhi and Mumbai, where telcos are largely deploying their newer infrastructure, come at 12 and 13 positions with 86.73 percent and 86.65 percent of 4G coverage, up from 17th and 15th respectively, back in April. Similarly, the Jammu and Kashmir circle comes at the last spot with 80.23 percent.

OpenSignal expects that the next major spectrum auction by the Indian government will help operators major further improvements in the 4G availability scores. "The telecom sector is developing at lightning speed, with operators investing heavily in their 4G networks, while fierce competition has led to several major mobile mergers in the past couple of years," the company said.

Further reading: OpenSignal
Jagmeet Singh Email Jagmeet Jagmeet Singh writes about consumer technology for Gadgets 360, out of New Delhi. Jagmeet is a senior reporter for Gadgets 360, and has frequently written about apps, computer security, Internet services, and telecom developments. Jagmeet is available on Twitter at @JagmeetS13 or Email at jagmeets@ndtv.com. Please send in your leads and tips. More
Bose Sleepbuds With Noise-Masking Technology Launched in India, Priced at Rs. 22,900