Reliance Jio customer care had confirmed on Twitter a few days ago that it is conducting trials for the JioFiber home broadband service in six cities at present. With the company’s sights set on dominating the market across the country, it will come as no surprise to anyone that Reliance Jio is expanding its JioFiber home broadband trials to more cities. The plan to expand the broadband testing to more cities “over the next few months” had been mentioned in a Q1 earnings call, but there was no mention of when this would happen.

Replying to a customer on Twitter, who had asked about signing up for Reliance Jio broadband in Pune, the Jio Care team said the service is only available in select areas of Mumbai, Delhi-NCR, Ahmedabad, Jamnagar, Surat, and Vadodara. The Jamnagar operations are limited only to employees of Reliance Industries Limited, according to the tweet. Interestingly, a Twitter user in September had posted results of the Reliance Jio home broadband network speed tests in Pune, with speeds going up to 743.28Mbps.

Along with this, the picture of a Reliance Jio leaflet providing details of the JioFiber Preview Offer has been posted on the micro-blogging site. According to the image, the Jio home broadband preview offer will provide 100GB of data with speeds up to 100Mbps per month; once the 100GB limit is exhausted, the speed will drop down to 1Mbps. Reliance Jio home broadband users will not have to pay any rental charges for the first three months. However, customers will have to pay a refundable security deposit of Rs. 4,500 for the Wi-Fi router that Reliance Jio is providing to operate the FTTH (Fiber-to-the-Home) connection. 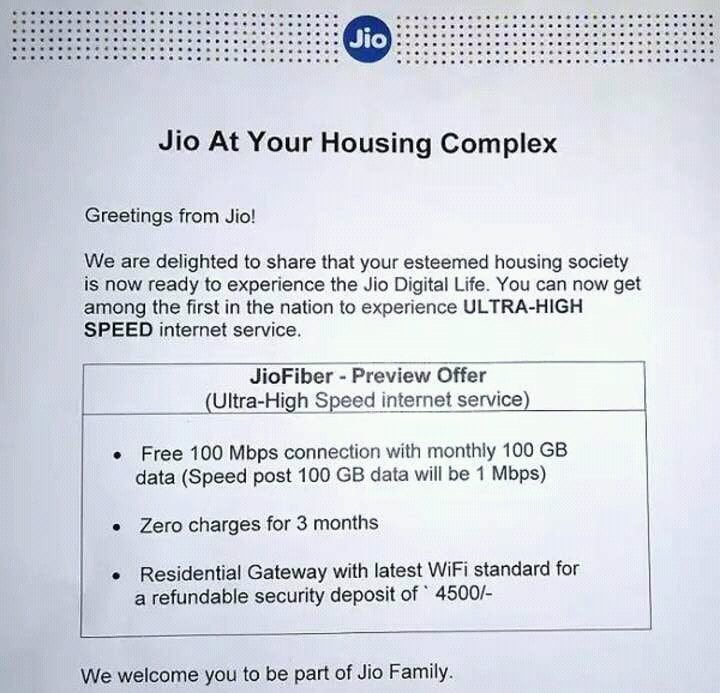 Several users who have had early access to the Reliance Jio JioFiber Preview Offer have tweeted about the service in the past. One such user in Mumbai had reported in January speeds between 70Mbps and 100Mbps on the 1Gbps connection. There is no official word yet on the commercial launch of the Jio broadband service yet, though Mukesh Ambani had said in the 2016 RIL Annual General Meeting the service will be for consumers as well as enterprises.

Reliance Jio was ranked the country's biggest broadband connection provider for the month of February by TRAI courtesy its 102 million 4G users; the telecom regulator considers Internet connections with speeds of 512kbps or above as broadband, and included both mobile and wired connections in compiling its data.