While Jio is known for its ultra-low cost data plans and free calls, its bundled content apps such are quite popular among users as well. The Jio TV app, in particular, has been a hit across the country as it provides them access to live TV channels without any extra subscription costs. However, streaming live videos on the app can quickly exhaust the daily data allocation of the plan, especially if a user has purchased one of the more affordable plans in the operator’s portfolio. Now, Jio is providing customers additional 10GB data that is earmarked just to stream content on its live TV app.

Jio users can check whether they have received the free 10GB data on their number in the MyJio app. They simply need to go to the My Plans section in the app, and the add-on data will appear below the plan details, if it has indeed been allocated. Along with the allocated data, the app will also show the expiry date and the amount consumed. 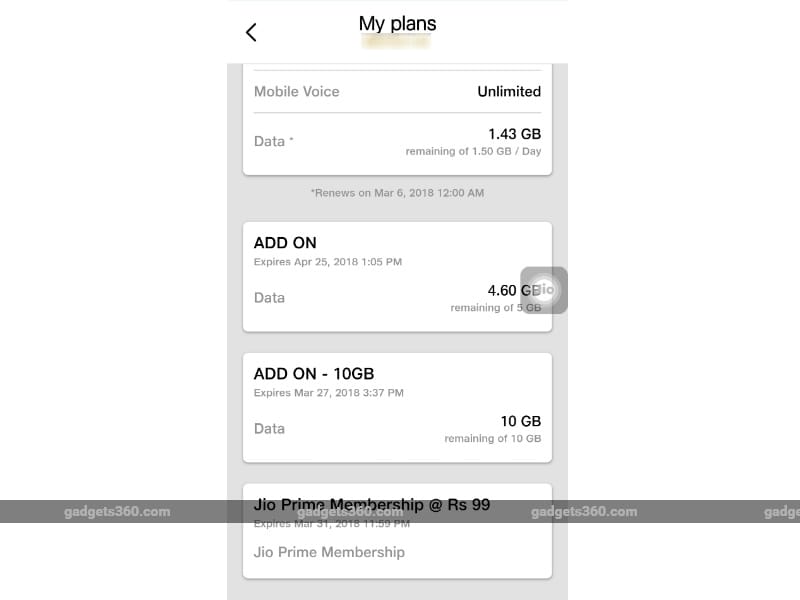 A customer care executive told Gadgets 360 that the free data is being given to users in “celebration" of Jio TV winning an award the recently-concluded Mobile World Congress (MWC) 2018 in Barcelona. The GSMA’s Global Mobile Awards (GLOMO) saw the app winning in the ‘Best Mobile Video Content’ category.

With the free data, Jio users will be able to watch live TV on the app without worrying about exhausting their daily data allocation. Interestingly, the last date to consume the free data is towards March-end, and the current Jio Prime subscription will expire on March 31. The company has not yet revealed whether it will change the terms of the Prime subscription starting April — the current subscription comes with free access to a host of bundled apps, including Jio TV.

Jio TV app has 583 channels, including 39 HD channels, in several Indian languages. One of the big competitors of the Jio TV app in the country is Airtel TV, which offers live as well as on-demand content.

The Mukesh Ambani-backed telecom operator started operations roughly a year and a half ago and has since brought down data prices across the industry as the incumbents started matching its tariffs by lowering data costs. Recently, Jio has been giving cashbacks on recharges, increased the daily data allocation on its popular plans, and made the Jio Phone available via third-party websites.