In the Chennai circle, users who buy the Fibro Combo ULD 4999 premium broadband FTTH plan, will now be able to use 1.5TB of data at 100Mbps speed. Post the FUP; the speed will be reduced to 2Mbps. With this plan, BSNL also is offering free voice calls (within the BSNL network and outside), and one email ID free with 5GB space. 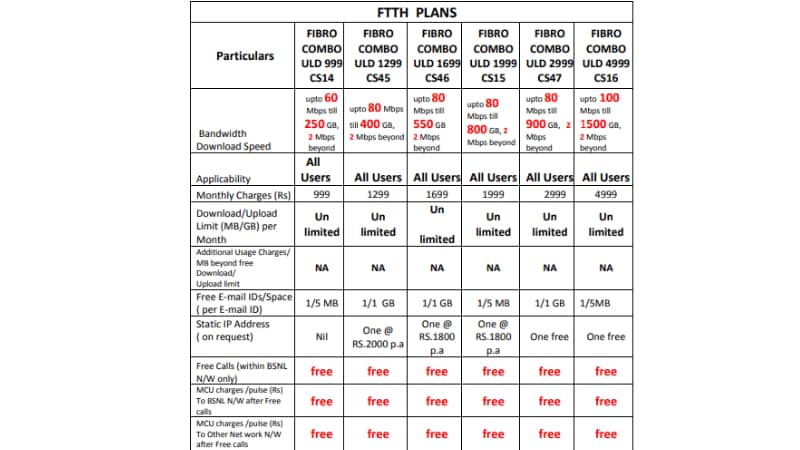 BSNL is also offering free voice calls (within the BSNL network and outside), and one email ID free with all the premium FTTH plans. Storage capacity per email ID varies with different plans. As mentioned, all these tariffs are only applicable for the Chennai circle.

BSNL recently also revised its broadband plans worth Rs. 1045, Rs. 1395, and Rs. 1895 to take on Jio GigaFiber. Jio officially announced the launch of Jio GigaFiber earlier this month. With claimed speeds of up to 1Gbps, the service aims to deliver wall-to-wall broadband service for mobile devices; it will also work on TVs with the help of GigaTV set-top boxes and smart home devices. Those with GigaTV will also be able to make phone calls to other TVs, phones and tablets on Jio GigaFiber networks. Also, services such as Ultra HD entertainment on TV, multi-party video conferencing, voice-activated virtual assistant, virtual reality gaming and shopping, and smart home solutions will be provided to subscribers.